Just the Kind of Place to Cherish

JOSH KAROWAfter years of dense growth took over the property, Lawrence Creek State Natural Area in central Wisconsin has been restored to its natural open savanna through the work of DNR programs and partners.

Nestled in the rolling sand hills of eastern Adams County lies a property once revered by many yet now forgotten by most.

Dubbed the Lawrence Creek State Natural Area in 1968, this tract of land was the birthplace of modern brook trout management. In the conservation world, it is internationally famous for research conducted there by the DNR, overseen by noted DNR fisheries biologist Robert Hunt.

For the ardent trout enthusiast, fishing these headwaters is akin to a pilgrimage to Mecca. Yet beyond the trout history buff or the few remaining locals who have been fishing this reach since the late Hunt used it as his study site, few are aware of just how globally significant this natural area is.

But that may be changing, thanks to new research taking place at Lawrence Creek — this time with a focus on something other than trout. And it’s being made possible in large part through funding from the Cherish Wisconsin Outdoors Fund, a public-private partnership designed to support vital habitat management and ecological restoration on state-managed public lands. At Lawrence Creek SNA, while intensive trout management and research was conducted within the headwaters, the surrounding landscape slowly transitioned from oak barrens and savanna to a dense over-story oak woodland. With that transition came the loss of many of the species that call these now rare ecosystems home.

Prairies, oak barrens and savannas, and sedge meadow communities all rely on fire to persist. Without fire, wildflowers dwindle, pollinators disappear, grassland birds are replaced by other specialists and entire ecosystems vanish from the landscape. That was the case for Lawrence Creek SNA.

But a renaissance is on the horizon. 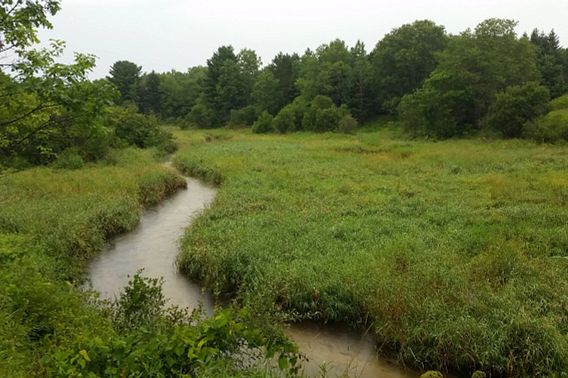 Starting over five years ago, conservation biologists and ecologists at the DNR began to formulate a plan for restoring this special property to its former greatness.

Using lessons they had learned from previous restoration efforts on nearby properties such as Quincy Bluff and Wetlands SNA and Observatory Hill SNA, the property managers worked with their counterparts in the DNR’s Division of Forestry to prescribe a timber harvest to return the more open savanna structure to the Lawrence Creek landscape.

Through a whole tree biomass harvest method and an intensive species and size-specific “leave tree” restriction, managers were able to achieve the desired canopy structure. Meanwhile, the reduction in slash ensured that fire could be returned to the landscape safely.

As anyone who has championed an invasive species battle knows, winning the fight will be a campaign fought for generations to come. But with this multifront attack underway, it has become evident that this illustrious setting is no longer forgotten. Support for the next era of conservation is clearly apparent.

That support is where the Cherish Wisconsin Outdoors Fund comes into play. Created by the state Legislature in 2012, the permanent endowment fund allows the DNR to collect voluntary donations from buyers of hunting or fishing licenses. Also contributing are donors to the nonprofit Natural Resources Foundation of Wisconsin, which manages the fund.

The endowment grants money through interest earned on the fund to the property managers of Wisconsin’s 1.5 million acres of public lands.

“The Cherish Fund is an investment in our future, protecting critically important public lands and waters for current and future generations,” said David Clutter, executive director of the Natural Resources Foundation of Wisconsin.

Based on the endowment’s size of nearly $1 million and an average of more than 50,000 donations per year, it is clear the conservation ethic of the people of Wisconsin is as strong as ever.

Through a competitive process, constituents from many sectors of outdoor recreation decide where best to utilize the donations of countless outdoor enthusiasts. It’s a grassroots effort made possible in Wisconsin because so many people are still integrally connected to the land.

Now on its second disbursement, the Cherish Fund has already supported great projects around the state, including habitat restoration on State Natural Areas in Dunn, Walworth and Chippewa counties. The project on Lawrence Creek SNA will involve installing firebreaks for prescribed burning, continued invasive species management and interseeding grass and wildflower seeds throughout the site to reintroduce many of the species lost to time. 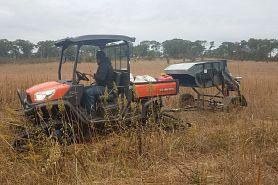 While the Cherish Fund grant won’t cover all costs, it’s an important source of capital for Lawrence Creek’s habitat restoration and management efforts. Managers hope the support provided through the Cherish Fund will spur others to help in the fight.

As active habitat restoration gains momentum at Lawrence Creek SNA, the next generation of research ecologists are again utilizing the property as a study site — this time for oak savanna and barrens research.

Much like the trout research conducted by Hunt in the 1960s, the hope is that what is learned through the upland management on Lawrence Creek SNA will serve as a guide for property managers for generations to come.

Josh Karow is a conservation biologist in the DNR’s Bureau of Natural Heritage Conservation.

• Lawrence Creek State Natural Area is within the Lawrence Creek Fish and Wildlife Area near the border of Adams and Marquette counties. For details, search “Lawrence Creek” at the DNR website, dnr.wi.gov.

• Volunteers are needed to assist in controlling invasive species at Lawrence Creek and other SNA locations statewide. For information, including scheduled workdays and locations, check dnr.wi.gov and search “volunteer.”

• The Cherish Wisconsin Outdoors Fund provides a permanent source of funding to support the state’s public lands, including Lawrence Creek SNA. There are several ways to donate, including directly online or via the gowild.wi.gov site when you buy hunting and fishing licenses. For details, check cherishwisconsin.org.