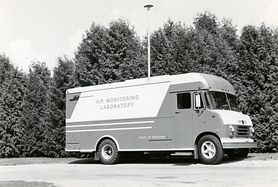 The DNR’s Air Program began ambient air monitoring that same year to determine if the state was meeting the national air quality standards for these pollutants. Monitoring specialists used customized equipment such as weather balloons, aircrafts and boats to monitor Wisconsin’s air quality.

These tools have helped DNR staff to understand how air pollutants travel and react over Lake Michigan and throughout the state.

It also encouraged staff and citizens to be part of the solution, especially by limiting driving and reducing electricity use. The Ozone Action Day program was a regional strategy implemented by Wisconsin, Illinois, Indiana and Michigan to reduce ground level ozone levels in the Lake Michigan area.

Currently, a similar but even more effective purpose is served by the Air Quality Advisory program, which informs the public of current or forecasted air quality events. A statewide network — with 31 ozone and 20 fine particle monitoring sites — measures ambient air quality and criteria pollutants in Wisconsin.

Managing ozone pollution in Wisconsin has been a challenge for decades. This is because ozone levels along the state’s lakeshore are heavily influenced by the meteorological impact of Lake Michigan and emissions originating in other states.

The DNR has long worked with neighboring states and regional organizations to develop strategies to reduce ozone pollution throughout the region. To effectively address this challenge, it is crucial for the DNR to understand what drives ozone formation and movement in this region.

Three years ago, for example, the DNR participated in a collaborative field study of ozone chemistry and meteorology along the Wisconsin-Illinois lakeshore.

Besides the DNR, participants in the 2017 Lake Michigan Ozone Study (LMOS 2017) included the EPA, NASA, the Lake Michigan Air Directors Consortium, National Oceanic and Atmospheric Administration, environmental agencies in Illinois and Indiana, and four universities including the University of Wisconsin.

Following up on LMOS 2017, the DNR in 2019 began enhancing its ozone air quality monitoring. As part of this effort, the Air Program deployed its new Mobile Air Monitoring Lab (MAML) for the first time in June.

The state-of-the-art mobile lab has extensive monitoring capabilities including a suite of criteria pollutant analyzers, a volatile organic compound (VOC) sampling system and meteorology data collection. The mobility of the lab allows the program to place it in strategic locations during Wisconsin’s ozone season.

From May through October of 2019, the MAML spent time monitoring ozone and precursors — the ingredients that react to form ozone — in Kenosha and Ozaukee counties. During the summer of 2020, the lab will be based in Sheboygan County.

Also in 2020, the Air Program will monitor ozone at the top of the Kenosha water tower to explore the vertical distribution of the pollutants in this area. In addition, the program is partnering with the EPA and NASA on the use of ground level instruments that measure nitrogen dioxide (which reacts to form ozone) throughout the air column and is working with universities on other field activities to help the DNR better understand ozone science.

The DNR plans to continue expanding the enhanced ozone monitoring program in future years to facilitate improved understanding and management of ozone pollution in Wisconsin.

The Clean Air Act requires the EPA to set National Ambient Air Quality Standards (NAAQS) for pollutants that are common in outdoor air, are considered harmful to public health and the environment, and that come from numerous and diverse sources.

The legislation requires the EPA to periodically review these standards, and the science behind them, to determine whether changes are warranted.

In addition, the number and extent of Wisconsin’s ozone nonattainment areas have decreased, even as the standards have become more stringent.

In 1979, the EPA set a one-hour standard for ozone at 0.12 parts per million (ppm). In Wisconsin, 15 counties were designated nonattainment for the 1979 one-hour ozone standard.

In 2008, the eight-hour ozone standard was lowered to 0.075 ppm, and the EPA designated Sheboygan County and part of Kenosha County as nonattainment.

In 2015, the EPA further reduced the eight-hour standard to 0.07 ppm. Only small portions of six lakeshore counties were designated as nonattainment for the 2015 standard, with some of these areas currently measuring attainment-level ozone readings.

Today, 94% of Wisconsin’s population lives in areas meeting all federal air quality standards, and it is a priority for the DNR to continue to address remaining areas. By working with partners, conducting additional monitoring, planning and data analyses, and engaging with other states, the DNR can better determine how and where to control pollutants contributing to nonattainment.