A favor for the 'falcon of sparrows' 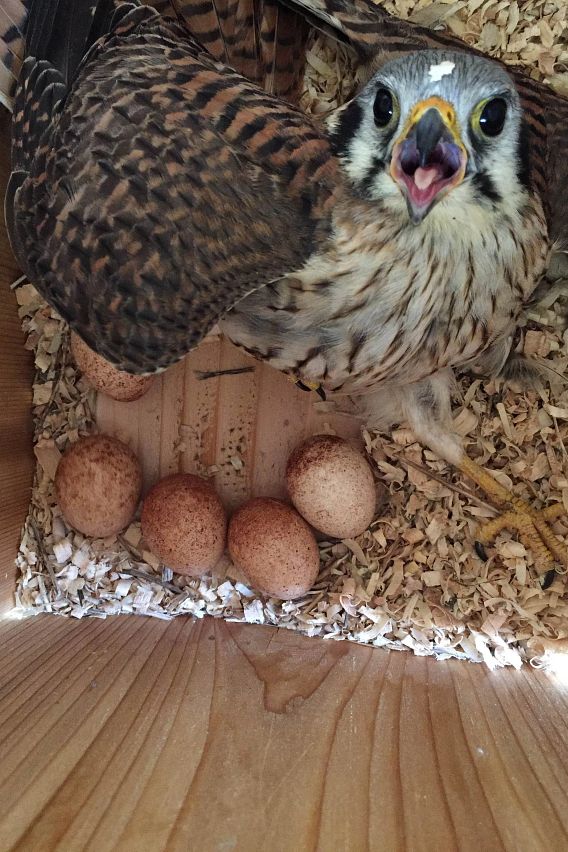 ©PATRICK READYA nest box camera captured this view of an American kestrel and its clutch of eggs.

Imagine you are driving along an old, dusty farmland gravel road and notice a little bird perched on a telephone wire.

As you pass by, you notice the shape of the bird is not one of a blue jay or mourning dove, but of a predator bird with talons and a hawk-like head. As it takes flight, you notice the distinct barring color pattern on its tail feathers.

After your vehicle passes and you continue on your way, the raptor takes flight and hovers above the prairie, scouring the ground for prey, perhaps an unsuspecting mouse, grasshopper or a thirteen-lined ground squirrel.

The bird spots a European house sparrow that has ventured above the safety of its barn home. Instantly, the unsuspecting sparrow becomes a mid-air prize for the hungry falcon, which brings the meal back to a large, wooden nesting box and feeds its chicks.

This compact but effective bird of prey is the American kestrel, North America’s smallest falcon. It also is the continent’s most prevalent falcon.

If current trends continue, however, that could soon change.

According to the North American Breeding Bird Survey, which provides reliable population data and trend analyses for more than 500 bird species, American kestrel populations in the U.S. have been steadily falling over the past 50 years.

The drop is estimated at an annual rate of 1.39% and means there are more than 51% fewer kestrels nationwide than there were 50 years ago, according to the survey. In the Wisconsin region, populations have declined by 41%.

Research indicates it’s difficult to pinpoint an exact cause of the kestrel’s decline. Many environmental factors may be at play, including increasing challenges in finding nesting habitat across the landscape. That’s where conservation work may provide a boost.

In Wisconsin, efforts to help conserve these small-sized birds of prey have been underway for more than 50 years. Dedicated volunteers have spent many hours building nest boxes, gathering data and documenting kestrel activity to reverse the species decline.

In some cases, volunteers help monitor the nest boxes and record several observations such as nest occupation, number of eggs, number of chicks and how many fledge, adults equipped with a leg band and other vital statistics.

In a few cases, volunteers also help scientists capture kestrels using mist nets, a process that allows scientists to record an individual bird’s health and estimate population numbers. Biologists also can wrap a lightweight metal band around the falcon’s leg to allow wildlife biologists to track the bird over its lifetime.

In Wisconsin, near Arlington, one kestrel monitoring project has been ongoing for 35 years, started by Mark Martin and Sue Foote-Martin at Madison Audubon’s Goose Pond Sanctuary. This ecological preserve provides refuge for many bird and wildlife species throughout the year.

In 1985, a local power company was removing electric lines along the roadway.  The Martins realized there was a unique opportunity to aid the American kestrel, and Sue asked the utility if it could leave up some power line poles as a place to erect kestrel boxes.

When the project began, 10 nest boxes were installed and checked for activity at the end of each year. In 2009, the program got an infusion of attention from volunteer Brand Smith, who worked to increase the data collection frequency and nest boxes across southcentral Wisconsin. 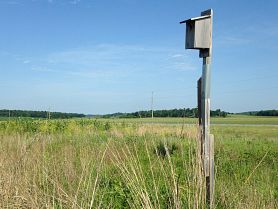 Smith monitored over 70 nest boxes himself at that time, logging more than 500 miles of travel between nest boxes each summer. He worked to recruit more volunteers to help, and with support from Madison Audubon, the efforts grew into a full-fledged Kestrel Nest Box Monitoring Program with volunteer involvement and nest box counts.

In 2012, Smith trained volunteers to use an unobtrusive technique employing camera mounts to observe eggs and chicks while they were in the nest boxes. He continues to lead the program today.

As a bonus, this work can be done independently, making it a wonderful and useful pastime during a global pandemic.

In addition to installing and monitoring nest boxes, Madison Audubon also partners with Central Wisconsin Kestrel Research (CWKR), a program in Stevens Point, to band kestrel adults and chicks. The program has been supported and revitalized in the past by the Department of Natural Resources in partnership with the Aldo Leopold Audubon Society.

Janet and Amber Eschenbauch are coordinators for the CWKR program and hold a master banding permit. Each spring near Goose Pond, the two offer a hands-on experience with kestrels, teaching participants why and how the birds are banded.

This year’s public banding activities were canceled due to COVID-19, but Madison Audubon members Bob and Sue Volenec attended a similar field trip to Goose Pond in 2017. They became enthralled with the opportunity to help with kestrel banding and soon began monitoring kestrel boxes near their home in Jefferson County. 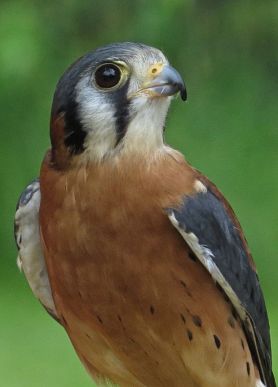 “(Kestrel monitoring) has gotten us involved with Scout troops building and installing more boxes and science fair exhibitions where we have introduced school kids and adults to what kestrels are,” the Volenecs note. “All of this, along with the experience of facilitating successful kestrel reproduction, is quite rewarding.”

They now bring their grand-children to kestrel monitoring activities and banding field trips and are happy to learn new things every time they volunteer at events to support kestrels.

“I witnessed the whole nesting process of an American kestrel, from mauve speckled eggs that hatched into white fluff balls, then developed dark feathers on their backs and wings, and finally morphed into a beautiful fledgling kestrel,” Bleck said. “What a grand experience!”

This year, the monitoring program has a total of 179 kestrel nest boxes, including on state lands such as Poynette’s MacKenzie Center, making it the second largest program in the country. More than 60 volunteers are signed up to help.

In 2019, the program had 171 kestrel nest boxes and monitoring showed that 55 were occupied. In the past four years, from 2016-19, a total of 338 chicks and 55 adults have been successfully banded by the program, and an estimated 662 kestrel chicks have fledged.

Madison Audubon continues to seek volunteers for the Kestrel Nest Box Monitoring Program and offers many other citizen science activities available to the public. Opportunities include: Bald Eagle Nest Watch, monitoring eagle nest success and productivity; Bird Collision Corps, a bird-window strike monitoring program; and monarch tagging, an effort to track monarch butterflies when they migrate to Mexico in the fall.

Other programs, such as maintaining songbird nest boxes and recording butterfly and orchid counts, have been occurring at Madison Audubon sanctuaries for many years. Such programs create opportunities for community members to engage with birds and conservation in an up-close and memorable way while also addressing important research needs in local communities.

The American kestrel may be slight and its future unclear, but scientists and citizens alike are learning more about these birds every day.  As work continues to provide better kestrel habitat, the hope is it may improve the chances for a resurgence in population of these small but beautiful falcons. 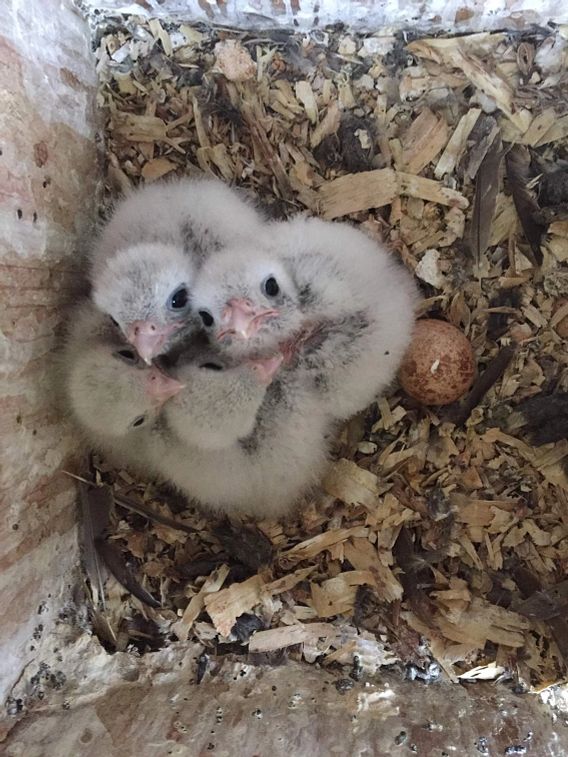 ©PATRICK READYIt takes about a month for American kestrel chicks to fledge after hatching.

ABOUT THE AMERICAN KESTREL

The scientific name of the American kestrel, Falco sparverius, means “falcon of the sparrows.” They can be found in wide-open areas such as prairies, grasslands and farm fields but also are noted in cities and suburbs.

Kestrels nest in tree cavities and rely on unoccupied woodpecker holes, tree hollows and nooks in human-built structures to make a home. Suitable nesting cavities are scarce due to competition from other animals. Kestrels may evict bluebirds, northern flickers or even small squirrels to acquire a habitable nesting location.

A kestrel’s diet includes insects, grasshoppers, beetles, dragonflies, spiders, butterflies and moths. They also eat mice, shrews, voles, bats, small songbirds and occasionally small snakes, lizards and frogs. They capture their prey by pouncing on them, using talons on their feet to seize them. Kestrels may be seen hovering in mid-air before diving to catch their prey.

A kestrel’s key identifying features include pale feathers with dark barring when seen from below and warm, rusty brown spotted with black when seen from above, with a black band near the tip of the tail. Males have slate-blue wings, while females’ wings are reddish-brown. Both sexes have pairs of black vertical “mustache” marks on the sides of their faces.

To learn more about American kestrels and their habitat, check these websites.