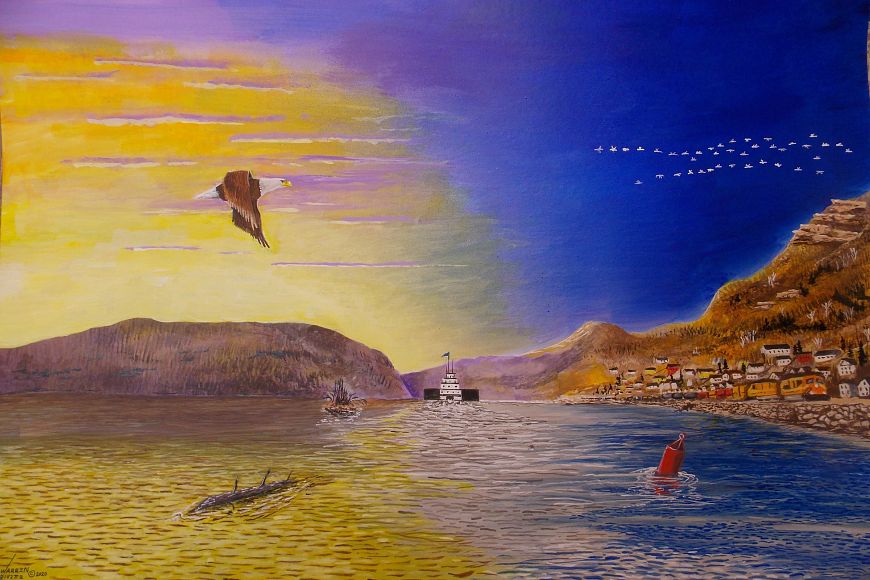 Having fished the Mississippi River in western Wisconsin for the past 63 years, I think of myself as a river rat of sorts. My time on the river has only increased over the last 16 years, post-retirement, when I’ve spent more than 100 days per year on the water.

Now, at age 72, I increasingly find myself pondering the future. How much longer will I be able to be on the river and enjoy my love for it?

As I contemplate that future, I often reflect on the past, recalling wonderful fishing days, up-close wildlife encounters and memorable outdoor experiences. There is one moment, though, that stands above the rest.

I didn’t have the presence of mind to attempt to capture the image on camera, so the scene I most remember from the Mississippi is only in my mind’s eye. But there, it is as vivid as a museum canvas — easily my all-time favorite river recollection.

It was my final day of Mississippi River fishing for the 2017 season. That last day always yields mixed feelings. Fishing hadn’t been good that day; my spirits were down.

The sun had just set, and I was headed upstream toward my Alma launch site when several somewhat ordinary occurrences collaborated to create an extraordinary picture. I shut my boat down to focus on them.

While the sun was down from my vantage point on the water, it still shone brightly on the gorgeous tall river bluffs. The trees, now barren of leaves, reinforced the changing seasons.

A sizeable skein of snow geese flew high above the bluffs, the sun reflecting brightly off their white bodies and beating wings, framed against that remarkably blue sky. Their cacophonous yet lonely calls seemed to speak to their urgency in migrating toward winter sanctuary.

Elsewhere, perhaps 100 yards upstream from me, a mature bald eagle flew west to east across the channel barely 50 feet above the water. Eventually, it stopped to roost near the top of a dead tree where it sat in majestic glory, surveying its domain.

Left in peace and harmony

Also catching my attention was the colorful, picturesque town of Alma, nestled under the bluffs. A southbound Burlington Northern freight train ran along a narrow rail strip between Alma and the river.

Finally, a loaded tow boat pushing a full complement of 15 barges was rounding the last bend, heading toward Alma Lock and Dam No. 4. So much going on in that 90 or so seconds, all within my view!

Then, the train and the snow geese were gone. The sun no longer shone on the bluffs. Only the eagle and I were left to reflect on the barge creeping out of sight.

Everything became quiet and a great sense of calm and rightness settled over me. I sensed a presence of my dad, Charles — a.k.a. “Chappie” — who first brought me to this gorgeous place when I was 9. He taught me to fish, to love this area, and so much more. Chappie died on a fishing trip here in 1991.

Reflecting on all I had just witnessed, I was very much at peace, interacting in harmony with nature. I sensed a presence of Chappie and knew that he, too, would have found this brief moment and its unforgettable images extraordinary.

As I ponder the future and recall the past, the message seems clear. In memory and honor of Chappie, and in light of many wonderful Mississippi experiences, I’ll gratefully wear my river rat hat as long as I am able.

Jon Chapman is an Army veteran and retired MBA/CPA who had a 32-year career with John Deere, including a mid-1970s assignment in Horicon. Retired to Tallahassee, Florida, he spends about four months each year in Buffalo City.

Warren Rivette of Buffalo City painted this image of the Mississippi River scene recalled by his friend and writer, Jon Chapman, who took Rivette in a boat out on the river near Alma to show him the exact spot of the memory. Rivette created the scene initially in watercolors and, after Chapman’s review, using acrylic paints on masonite for the final version — an 18-by-24-inch piece Chapman hung in a special walnut and mahogany frame. Rivette is retired from the Milwaukee Police Department, where he worked for his last 11 years as a sketch artist. A hunter and angler who often enjoys these pursuits on the Mississippi, he also has worked as a taxidermist since the 1970s.