Heckrodt Wetland Reserve is a remarkable place for wildlife viewing

Story and photos by Tim Sweet 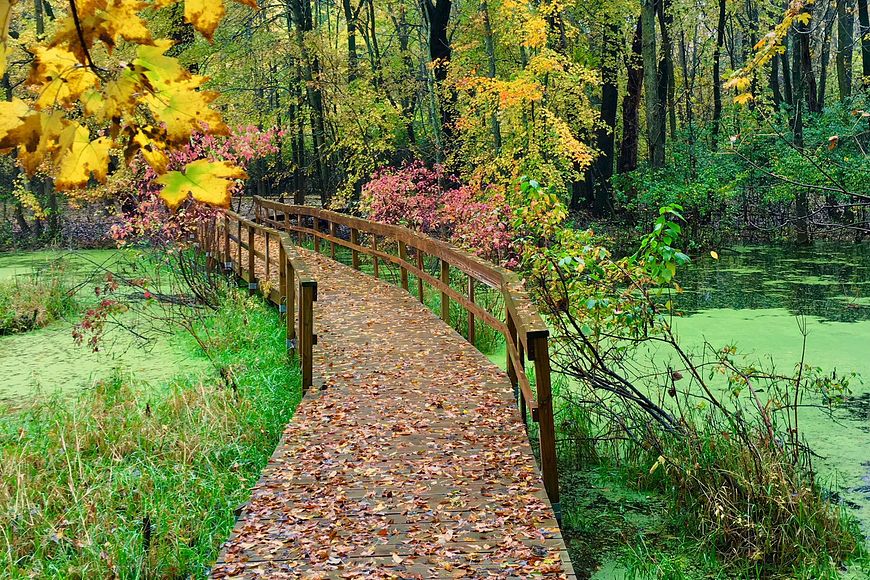 At Heckrodt Wetland Reserve in Menasha, boardwalks meander through beautiful scenes in every season.

Local wildlife photographers and nature lovers living in the Fox Valley region of  Wisconsin would probably agree with the girl who wore ruby slippers. There is no place quite like Menasha’s 76-acre Heckrodt Wetland Reserve.

Located between State Highway 114 and the north shore of Lake Winnebago, the reserve has 3 miles of trails including nearly 4,000 feet of elevated boardwalks. Not quite a yellow brick road, but a terrific place to go for a hike or stroll. 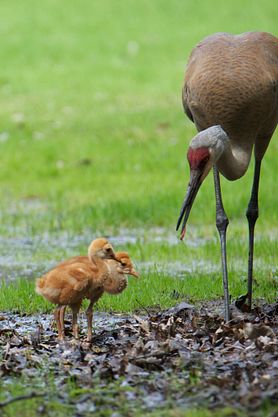 The first time I discovered this oasis for wildlife was three years ago, when I moved to the south side of Appleton. I was looking for a quiet escape from traffic noise and city life where I could spend some time in the woods and soak up the beauty of nature.

The resident deer were the animals I initially encountered at the reserve. They were numerous and very accustomed to humans.

By the end of October and continuing later into the fall, love-crazed bucks become more visible in the wetlands. The boardwalk areas provide up-close access to witness the rut, an annual fall spectacle that is thrilling to see.

A couple of years ago, an unusual buck was spotted around the property for a few days. The antler on his left side was normal, but the one on the right hung down across his nose like a facemask. It was a unique sight that left me wondering what had happened to this ungulate.

The following summer I photographed a deer with a large wound growing under its right eye and shared the picture with Jeff Pritzl, a DNR wildlife manager.

He emailed me back and explained, “It is a fibroma, essentially a large wart. They are caused by a virus.”  The condition isn’t particularly contagious, he added, noting deer usually recover from the warts.

Such have been some of the unusual sights I’ve seen at Heckrodt. But perhaps the best season of the year to observe wildlife here is springtime.

Last year, the first sign of spring began in late February when I was told about a great horned owl that was seen in an old hawk’s nest behind the nature center. The nest was near the top of a tall white pine tree.

Within a few weeks, two owlets were poking their heads up, watched under the careful scrutiny of their mother. People flocked to the reserve to get a glimpse of the owls. When the owlets fledged, the family remained in the same general vicinity for a month or so, allowing for amazing viewing opportunities. 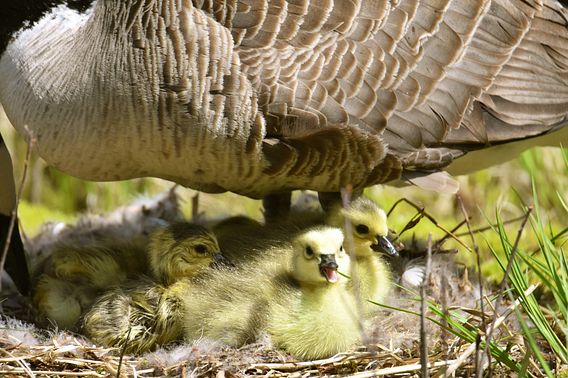 Many migrating birds return to the reserve in March. Wood ducks are commonly observed swimming near the education deck. The platform also serves as a blind and bird feeding area. A creek flows through here from one pond to another.

Male wood ducks are indescribably beautiful. Mated pairs can also be seen perched on overhead branches when they’re searching for places to nest in hollow trees.

Canada geese have become very common in Wisconsin and are sometimes considered to be a nuisance, but their parenting skills are worthy of admiration. In April 2018, a goose built her nest on a narrow peninsula in one of the ponds at Heckrodt, very close to a trail bridge in the reserve’s northeast corner.

A record-setting blizzard left over 20 inches of snow in its wake during the middle of the month. On the day following the storm, snow was piled all around the devoted mother goose, who hadn’t budged from the nest. Her goslings hatched a few weeks later after the snow finally melted.

Cranes and foxes and fawns, oh, my!

Sandhill cranes emerge from the marshy areas with their babies, called colts, in May. The parents diligently keep watch over the colts. These long-legged birds use their beaks to sift through leaf litter looking for worms to satisfy the insatiable hunger of their youngsters.

I’ve also encountered sandhill cranes in the reserve’s prairie located across a creek on the west end of the property. On one occasion, an adult offered a rodent it had captured to one of the colts.

The baby didn’t know what to make of the creature, so the parent took it back and gulped it down.  Later, the cranes walked across the bridge back to the wetland area.

A family of red foxes was entertaining to observe during May and June. They divided their time between two den sites. 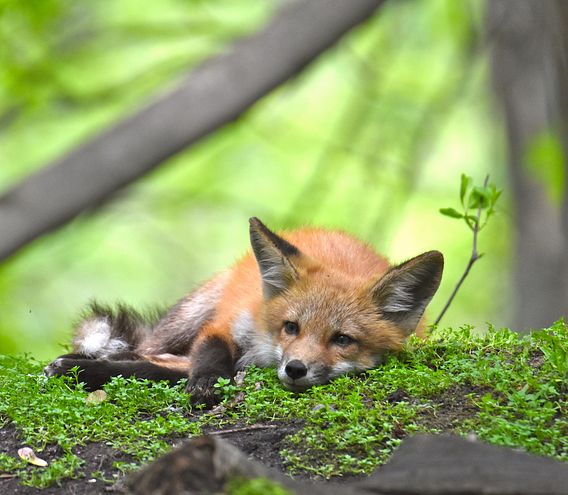 A fox kit is among the wildlife seen at Heckrodt Wetland Reserve.

While it was rare to see an adult fox, the kits spent lots of time playing with each other outside their foxholes. They were a favorite of many visitors to the reserve.

As the days grew warmer, fawns were born. Sometimes, I would unexpectedly come upon one lying motionless in the grass beside a boardwalk.

Fawns have such an innocence about them.  I love “spotting” them. But remember not to approach any fawns you might see and, as the DNR urges, “keep wildlife wild.”

Eyes on owlets plus baby raccoons

Later in the spring, a barred owl nested in a hollow cavity of a maple tree growing right next to a boardwalk. She had used the same tree to raise her owlets during the previous year.

Owls are very good parents. Both adults share the responsibility of feeding the young ones. They were sometimes glimpsed affectionately preening the babies. 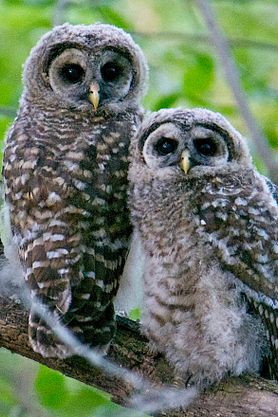 A barred owlet and adult, before the younger owl fledged.

One warm June evening while checking on the barred owls, I noticed a raccoon crawling out of the cavity of another nearby tree. Soon, three baby raccoons followed.

The mother acted like she had been spending too much time “trapped” in close quarters with her rambunctious children. The expressions on their little masked faces seemed angelic, while their mother looked exasperated and exhausted.

At the same time I was watching the raccoons, I turned to see a barred owlet hanging upside down from a tiny branch near the opening of its nest tree. This was the moment it fledged! The bird dangled there for about 10 seconds or so before dropping to the wet ground beneath the tree.

I often cross paths with repeat visitors when I’m out exploring at Heckrodt. On this particular night, I recall one of the photographers commenting, “Can you believe this place?”

It sure is remarkable to have such a wonderful wildlife viewing area so close to where I live. A daily dose of nature can do wonders for what ails me.

I honestly believe I am a healthier person because I regularly wander through the reserve. There really is no place like Heckrodt.

Tim Sweet writes about the outdoors from his home in Appleton.

INFORMATION
For more about the Heckrodt Wetland Reserve in Menasha, visit heckrodtnaturecenter.org.