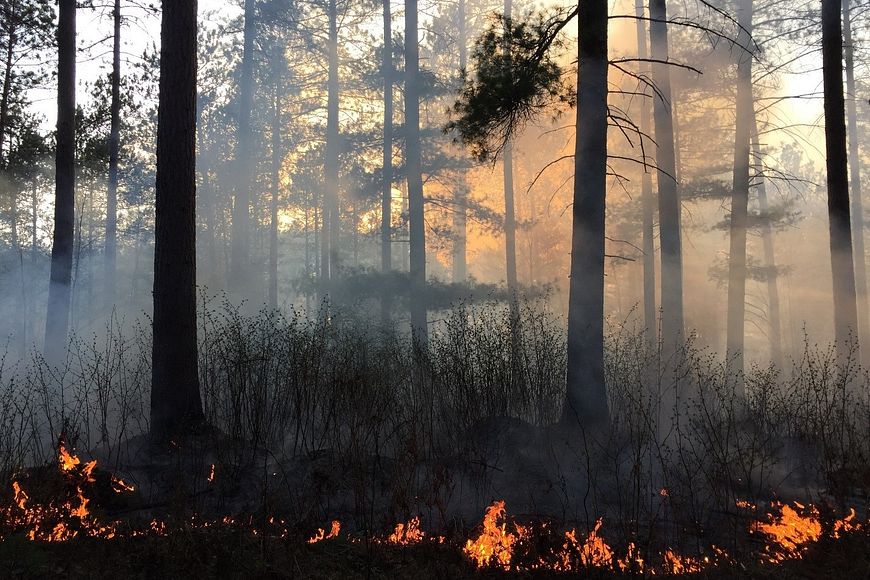 The relationship between fire and our landscape has always been complicated.

Here in Wisconsin, we recognized early the destructive capability of wildfire. We also recognized fire’s utility as an important tool for farmers and foresters. Our conundrum has been how to integrate fire with a more holistic vision of land management.

The science of fire ecology was born out of a yearning to understand fire’s role in the natural world and to learn why some natural communities thrive in a perceived cycle of destruction and rebirth. What we’ve learned about fire and the ecological services it provides has caused a shift in the conversation about when, where and how fire is considered good or bad.

Prescribed fire, also known as controlled burning, is the application of fire to a defined area during a specified or prescribed combination of weather variables, in order to achieve one or more specific management objectives.

An average of 35,000 to 40,000 acres are burned annually in Wisconsin, with most prescribed burns occurring in the southern two-thirds of the state. A small but growing percentage of these burns occur in fire-dependent forested communities.

Wisconsin is home to oak and pine barrens, oak savannas, oak woodland and oak- and pine-dominated forests, all of which depend in varying degrees on fire to maintain their unique structure and composition. The common tree species in these systems are oak and pine, many of which depend on fire for regeneration.

The average historic interval between fire events in oak savannas was roughly five years, while both northern and southern dry-mesic forests ranged from 10 to 25 years. While oak regeneration is common on sandy soils, elsewhere oak regeneration has been sparse for decades.

In regions of the state with more productive soils, factors such as low regeneration rates, invading brush and higher competition from species like maple all stack the odds against oaks thriving without the aid of prescribed fire.

The role fire plays in these communities is crucial in their maintenance. Without fire, fire-dependent natural communities can become overgrown and degraded, less resilient and less valuable to many wildlife species.

Simply put, we are utilizing good fire to make our forests healthier and more resilient to bad fire.

Although some might imagine a looming, intense wall of flames when they think of a forest fire, the reality of a woodland or forest prescribed burn usually includes flames the size of a fire hydrant. Prescribed burns are conducted when weather conditions — temperature, wind speed and direction, and relative humidity — encourage lower intensity fire behavior.

Conversely, wildfires usually occur in times of high temperatures, low humidity and high wind speeds. The speed of the flaming front during a forested prescribed burn usually ranges from a casual stroll to a brisk walk, as opposed to wind-driven forest fires that can easily overtake the fastest runner.

The aftereffects of prescribed fire are a fully intact, more open forest with an intact canopy layer, as opposed to the charred wasteland that catastrophic wildfires can leave behind.

Prescribed fire provides an abundance of benefits to fire-dependent communities, with the most common being the removal of the surface layer comprised of dead grass, leaves and pine needles. When too much “fuel” builds up, many forbs and native groundcover species cannot compete for light and space or emerge through that layer. 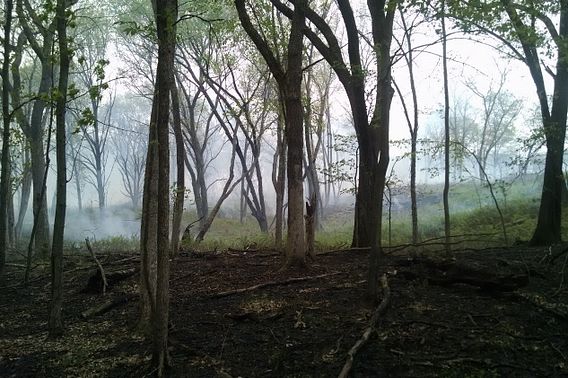 With brush removed after a prescribed fire, wildlife may find it easier to forage even in a still-smoking burn area.© SARA KEHRLI

When surface debris is removed, it provides an opportunity for native grass and wildflower species to compete and propagate once more. Fire also assists in seed scarification for many plants by weakening the seed cover and encouraging germination. These groundcover species are a vital food source for both game and non-game wildlife species throughout the year.

Another benefit is the removal of the mid-story brush, which decreases the likelihood of a surface wildfire traveling up “ladder fuels” to become a crown fire. In addition to decreasing wildfire intensity, particularly in our pine-dominated forests, the removal of brush equates to more ideal habitat for many species such as young gamebirds to move through, forage and evade predators.

To add further value, there are many in the state who appreciate increased visibility as they venture into the forest every fall. The decrease in both brush and surface debris also equates to better seed-to-soil contact, as well as better forage visibility.

I have been lucky enough on several occasions to see deer and turkey choosing to forage in the evening at a still-smoking burn unit. Turkeys love to search out crispy insects, and deer are known to forage in the ash for crucial minerals important to their diet.

Good fire allows the forest to continue to provide benefits to wildlife, even right after its occurrence.

The wildlife and forest health benefits are impressive when prescribed fire is used appropriately, but there are always factors that should be considered.

In high density forests with little or no history of management, other mechanical treatments such as timber harvest or mid-story thinning may be needed in order to remove some of the wildfire risk. 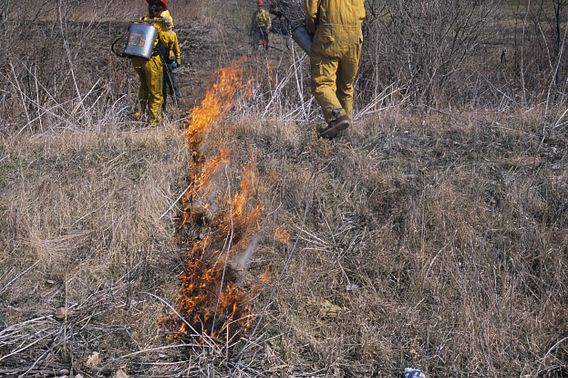 Drought is another variable to consider when deciding the right timing for a prescribed burn. If an area has gone through a period of significant drought, trees may still be stressed even after the rains come and may be more susceptible to disease compared to a prescribed burn in more normal conditions.

For landowners considering a future timber sale, consider the timing of a potential prescribed burn. When conducted in the appropriate conditions, some low intensity charring may occur on the outer layers of the bark, which takes a number of years to fade as the bark naturally sloughs off.

It’s been shown through both field studies and increasing examples that timber quality is not significantly affected by utilizing prescribed burns, but the outside charring nonetheless can be detrimental to the perceived value of the timber.  A prescribed burn following a timber sale is more ideal, as the slash and debris from the harvest can be consumed, providing more light to the forest floor as it encourages regeneration.

Regarding fire, the messaging from Smokey Bear and the DNR’s federal partners has become more nuanced over time, with “good fire vs. bad fire” themes now available to educate audiences.

In addition, a network of conservation partners around the state are working together to provide information, training and support regarding how fire can benefit certain lands and how to burn safely.  The Wisconsin Prescribed Fire Council is comprised of members including federal, state, county, nonprofit and private landowners who collaborate to promote the use of prescribed burning through educational workshops and training opportunities.

Michele Witecha is a DNR forester specializing in prescribed burns and fire behavior.