GET THE LEAD OUT 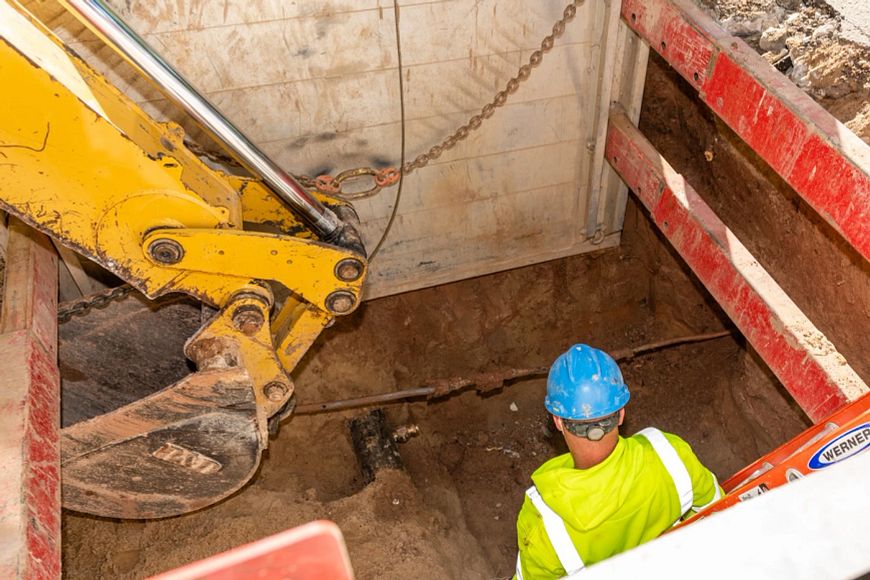 At a conference for the American Water Works Association’s Water Utility Council a few years ago in Washington, D.C., Nancy Quirk was eating lunch with other members of the council when someone brought up the topic of lead pipes.

The water crisis in Flint, Michigan, had been dominating the news cycle, and the group wanted to know what each member’s city was doing to handle lead pipe replacements within its borders.

Quirk, who is general manager for the Green Bay Water Utility, mentioned a program set up by the Wisconsin Department of Natural Resources that granted money to cities for the specific purpose of lead pipe replacement.

Quirk said the rest of her group became downright awestruck and incredulous at the possibility of such a program existing in their own states.

“I don’t think there’s any other state I heard of that did what Wisconsin did,” she said of the DNR’s Safe Drinking Water Loan Program. Through the SDWLP, Green Bay secured about $800,000 to replace many of its lead pipes.

Using lead pipes for water can mean exposure to lead poisoning for many households. That kind of exposure is unsafe and could lead to negative health outcomes such as cardiovascular disease, developmental delays and reproductive issues.

There is no safe level of lead in drinking water, but the Environmental Protection Agency mandates a federal action level of 15 parts per billion. That means cities are required to take action if their water contains at least 15 ppb of lead.

The SDWLP funds projects for publicly owned water infrastructure such as water mains — the large pipes that run directly under city streets. After such pipes were replaced in Green Bay, to be totally lead-free the city needed to find money to replace the private lead service lines that run from the curb into people’s homes.

After some digging through city records, Quirk said her utility department found around 250 private LSLs that needed to be replaced. The steep price tag of about $5,000 per replacement, however, prevented the city from helping residents with the cost.

“We needed to have some other funding,” she said. “We were even working on an ordinance to help possibly fund it for our people.”

That’s when the DNR stepped up again with yet another program to offer funding for private-side LSL replacement.

“The DNR came in and had this (other) program,” Quirk said. “It was just so welcome.”

ON THE PRIVATE SIDE

The Private Lead Service Line Replacement Program, unlike the regular SDWLP, earmarks money for municipalities to use specifically for replacing those private lead service lines Quirk worried residents would otherwise need to fund themselves.

What’s more, it’s not a loan program; it’s a principal forgiveness program — essentially a grant — so cities do not need to pay it back.

“Our goal by the end of two or three years is basically to replace as many lead service lines as we can with the funding,” said the DNR’s Rebecca Scott, a federal liaison and policy analyst for the state’s revolving fund programs. “In addition, we’re hoping to kickstart municipalities doing replacements and keep them doing the replacements into the future.”

The Private LSL Replacement Program — a state partnership among the DNR, the Department of Administration and the Public Service Commission — was established to assist communities in replacing any LSLs that exist between the public curb stop and the private connection point within residences, schools or daycare buildings.

It is a product of federal legislation passed in October 2019 that allows funds in Wisconsin’s Clean Water Fund Program to be transferred to the Safe Drinking Water Loan Program as principal forgiveness for the purpose of lead abatement.

The amount that could be transferred was up to 5% of the cumulative capitalization grants from the EPA that had been awarded to the Clean Water Fund Program.

“For us that came to $63.8 million, and we decided to transfer the full amount,” Scott said.

“It’s not new money that came into the program,” Scott added. “It’s a movement and recharacterization of the money.” 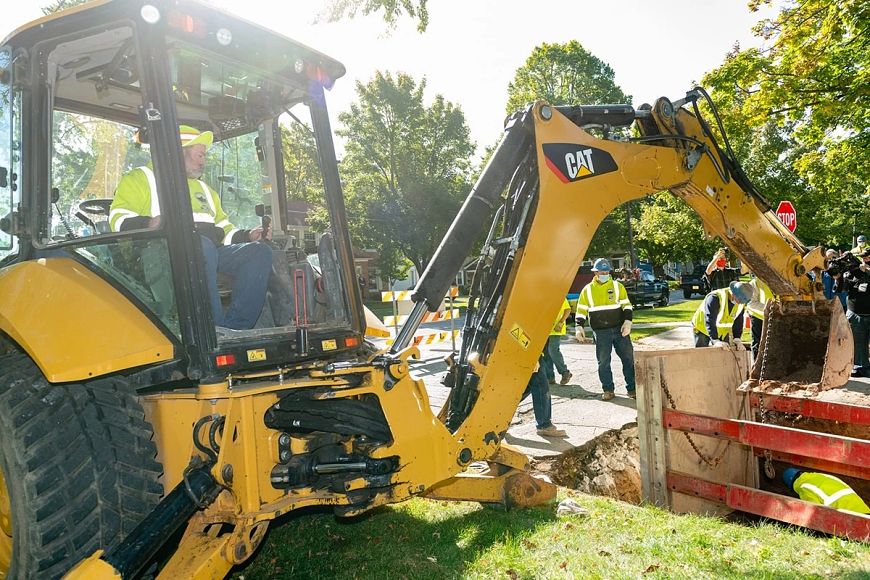 The Private LSL Replacement Program has worked in Wisconsin before, first appearing as a two-year program in state fiscal year 2017.

The application for these funds is available on the DNR’s website, and applications can be submitted through the end of the current state fiscal year in June. The DNR will continue the program until the money runs out.

Green Bay was the first to apply to the original program and in October, the city achieved 100% lead replacement. Quirk describes the completion as a huge relief.

“We made a goal that we would get rid of all of our lead in five years,” she said. “There’s not one person at this utility that wasn’t involved with helping us get to that goal. Everyone just pitched in and they innovated where they needed to.”

The DNR loan program was a catalyst for Green Bay’s successful removal of private-side LSLs.

“Before the DNR grant, we weren’t sure how we were going to get these people to be able to afford this water service to be replaced,” Quirk said. “Without the DNR program, we would not have been as successful at getting rid of our private-side lead.”

TO TREAT OR NOT TO TREAT

Green Bay represents the end of a long struggle to rid the city of lead pipes. Other cities are on their way.

In Stoughton, in southeastern Dane County, city utilities director Jill Weiss recalled finding herself at a crossroads a few years ago.

“We sort of recognized that we were really running down two paths,” she said. “One of either replacing 100% of our lead services, or we were going to need to treat our water.”

Weiss, like Quirk, felt called to action through the national news. Given the health risks of leaving lead pipes underground, the question of whether to rid the city of them was a no-brainer — it was just a matter of figuring out how.

After doing some rough price estimates, the right path became apparent. For lead pipe replacement efforts in 2021, Stoughton has budgeted $3.2 million. But to treat the water?

“We figured chemicals would be about $60,000 annually,”  Weiss said. “In the short term, the cost would be significantly less, but the long-term impact is more.”

Weiss added that in treating water, it was unclear whether the city could meet that EPA action level of 15 ppb.

“It’s something we’ll still have to do,” she said of meeting the standard. “But if we take care of it now, we then don’t have to move forward with any kind of water treatment.”

“All of our water that is used goes into the Fox River after it’s been treated,” she said. “The Fox River has got algae and toxins, and the phosphorus loadings are very high.“We did not want to look at treatment where we would have to add additional phosphorus into our water.”

Stoughton’s goal is a lofty one: Replace all lead pipes by the end of 2021.

To the best of knowledge as the year began, Weiss said the only areas of the city with lead pipes in the public sphere are within an area that circles downtown Stoughton.

“Obviously, to replace all lead services, we have to replace our public side as well. But it is a significant cost to the water utility to be able to do that,” she said.

Weiss first heard about the Private LSL Replacement Program last February in a meeting with the DNR.

“As soon as we were aware of the program, we started to set ourselves up,” she said.

When the DNR offered similar funding several years ago through its Safe Drinking Water Loan Program, the money came with a low-income provision for municipalities that Stoughton did not meet. The new funding does not have that restriction.

Instead, Weiss said, this program has a need-based ranking system for distributing funds.

“There’s a variety of things that come into play with the ranking, so if they were to run short on dollars, they rank the communities,”  Weiss said.

She described Stoughton being about “middle of the group” for communities currently pursuing program funding.

“Through a variety of educational opportunities, I think that DNR really has done a great job of helping us understand where we sit.”

The DNR’s Scott said the planning moving forward in Stoughton is just what the agency envisioned for the Private LSL Replacement Program.

“Once Stoughton heard about our program, they decided to make a big push to take all of their lead pipes out within a very short time frame,” Scott said. “It’s exactly the kind of
thing we were hoping this money could jumpstart.”

UP TO THE CHALLENGE

Replacement of public pipes in Stoughton has been ongoing for several years, but replacing private LSLs has posed more of a challenge.

Though Stoughton Utilities has always encouraged residents to get their pipes replaced, the message is largely ignored without proper education on the health effects of lead pipes.

That can be a lot of money for a homeowner, she acknowledged, and either way, the household still gets water just the same.

Without the grant program for the city to coordinate with property owners, she added, “We’ll have maybe only a handful each year that will replace their side of the lead service.”

The Private LSL Replacement Program allows for possible reimbursement of work that was done in 2020, depending on the circumstances

For 2021, Stoughton Utilities hopes to have the money on hand either to work with contractors directly or reimburse residents who replace their home’s lead pipes themselves using a list of prequalified contractors.

“It will be logistically challenging because utilities, as well as the contractors, will need to work with approximately 700-some customers to be able to change out their lead service,”
Weiss said.

“It’s really all hands on deck, and I have a great group of people that are going to do everything they can to make this happen.”

Working with the DNR on the funding elements has been a rewarding experience, Weiss added.

“I couldn’t say enough good things about the DNR,” she said. “They’ve walked us through all the questions we’ve had related to the program and have been fantastic to work with.”

“We try to at least create awareness that there’s this grant opportunity out there,”  Weiss said.

“To go forward with a project of this scope, we wanted to make sure we had a good, solid understanding of exactly what properties still have lead services,”  Weiss said.

Though replacing all the city’s lead service lines will be logistically challenging, Weiss said she can’t wait for the goal to be met.

“I’m concerned, but super excited to be lead-free and to be able to put the issue of lead behind us.”

Peter Jurich is a science writer for UW-Madison’s Waisman Center.

To learn more about lead service lines, including links to the Private Lead Service Line Replacement Program and information on lead in drinking water, check here.