Story by Kathryn A. Kahler and photos by Linda Freshwaters Arndt 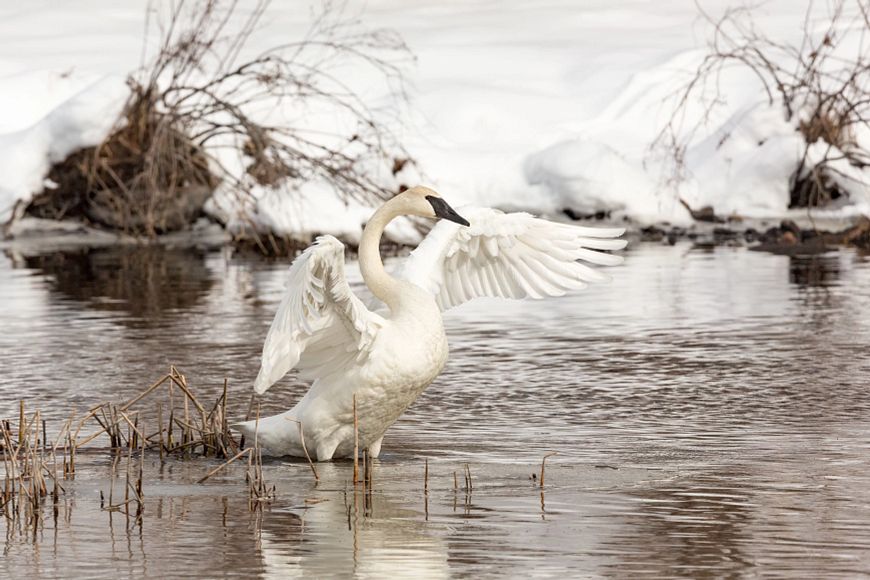 Trumpeter swans like this one pictured on the Chippewa River are "an incredibly beautiful bird," photographer Linda Freshwaters Arndt said. "So large, they make a Canada goose look small!"

Readers of this magazine often tell us how much they love photos we share from around Wisconsin. Since one of our go-to freelance photographers hails from none other than Winter — Wisconsin, that is — we thought it only fitting to highlight some of her seasonal photos and tell you a little about her.

Like many outdoor enthusiasts, Arndt developed her interest in wildlife photography as a kid, vacationing at her grandparents’ home in Three Lakes.

“I loved catching frogs and exploring,” she said. “My grandparents raised an orphaned baby raccoon, Ringo, and I adored him. My grandfather took Kodachrome slides, and I loved the colors of the ‘miniature pictures.’”

She also recalled being “fascinated by a picture of my dad and co-worker holding up a pheasant in a gorgeous fall hunting scene.”

Arndt’s eye for photography developed over time, and she relied on her own intuitions and natural abilities.

“I never liked fluorescent lighting and, with time, became aware of the nuances of light,” she said. “In high school, I took a black-and-white photography class and learned to develop film and print my images, but other than that, I’ve never taken an art course.

“I’m pretty much self-taught and learned photography from books and YouTube videos.” 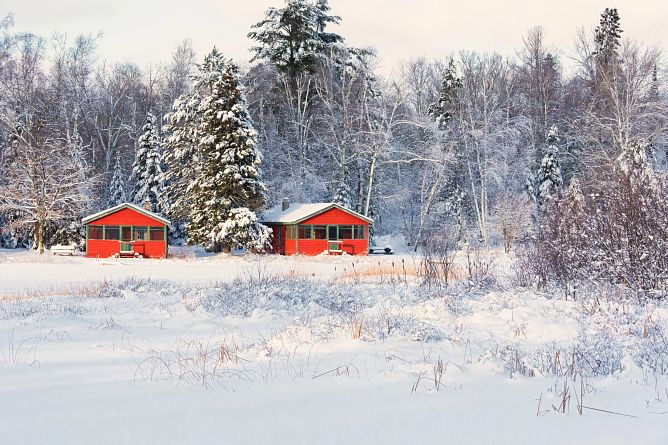 These twin red cabins await visitors at Fishtrap Cove Resort in Winter. "Some of my earliest childhood memories are of vacationing in a cabin much like these," Arndt said.

Arndt earned an accounting degree from UW-Milwaukee and spent about 10 years managing 75 people for a chemical firm in the city.  The hectic life left little time for her husband and daughter, so they made some life changes and moved to the Northwoods.

Winter is located 35 miles southeast of Hayward, in the heart of northern Wisconsin’s vacationland, with boundless access to public lands, recreational trails, lakes, rivers and streams. The Chippewa Flowage and Chequamegon-Nicolet National Forest are a few miles to the northwest, and the Tuscobia State Trail runs directly through the village.

Winter and its surroundings were the perfect setting for the Arndts and became the backdrop for Linda’s photographic skills.

“My husband, Al, built our home in Winter,” she said. “I was hired as a business instructor for Lac Courte Oreilles Ojibwe College in Hayward.”

She worked there for 15 years, balancing teaching with her pursuit of freelance wildlife photography. Fortunate to have a large property of her own to explore, Linda has found plenty of picturesque inspiration close to home.

“Most of my work is freelance and 90% of my photos are shot within 100 miles of my home,” she said. “Our 230 acres include a mix of habitat — woods, river, lake, swamp and meadow. Shooting close to home allows me to take full advantage of morning or evening light and beautiful weather conditions such as fog and hoarfrost.

“I’ve photographed sharp-tailed grouse at Namekagon Barrens, sandhill cranes at Crex Meadows and grosbeaks at Sax-Zim Bog (Minnesota), but most of my time is spent on our own land.”

Weather that might seem less than ideal turns out to be a good time for photographing wildlife.

What’s in her gear bag?

Just how does Arndt manage to capture those perfect shots of deer gazing into the camera, nursing their fawns or nibbling on white pine branches? It’s not as easy as it looks.

“I started out with a Sigma 50-500 mm lens on a heavy tripod. The image quality was good, but the autofocus was too slow, causing me to miss a lot of action shots. Now, many of my photos are taken at 1200 mm — 600 mm lens with a 2X teleconverter — using a monopod.”

She likes to get out on the water to capture images, a technique that brings added challenges but better photos.

“I often shoot from a boat, which increases the difficulty,” she said. “Most photographers don’t shoot at such extremes but, with improved technology, I’ve had excellent results.”

Linda’s love for the outdoors is a family trait. Her brother, Mark, hitchhiked to Alaska after high school, she noted. He has trapped, worked on the Alaska oil pipeline, guided grizzly bear hunts and run the Iditarod sled dog race — twice.

“Our parents held pretty traditional jobs,” she said, “so I’m not quite sure how we both turned out so adventurous. But people often find it interesting!”

Wisconsin Natural Resources magazine over the past decade. To see more of her photos, visit her website at Linda Freshwaters Arndt Photography [EXIT DNR].