Story by Andrea Zani and photos by Evan Halpop 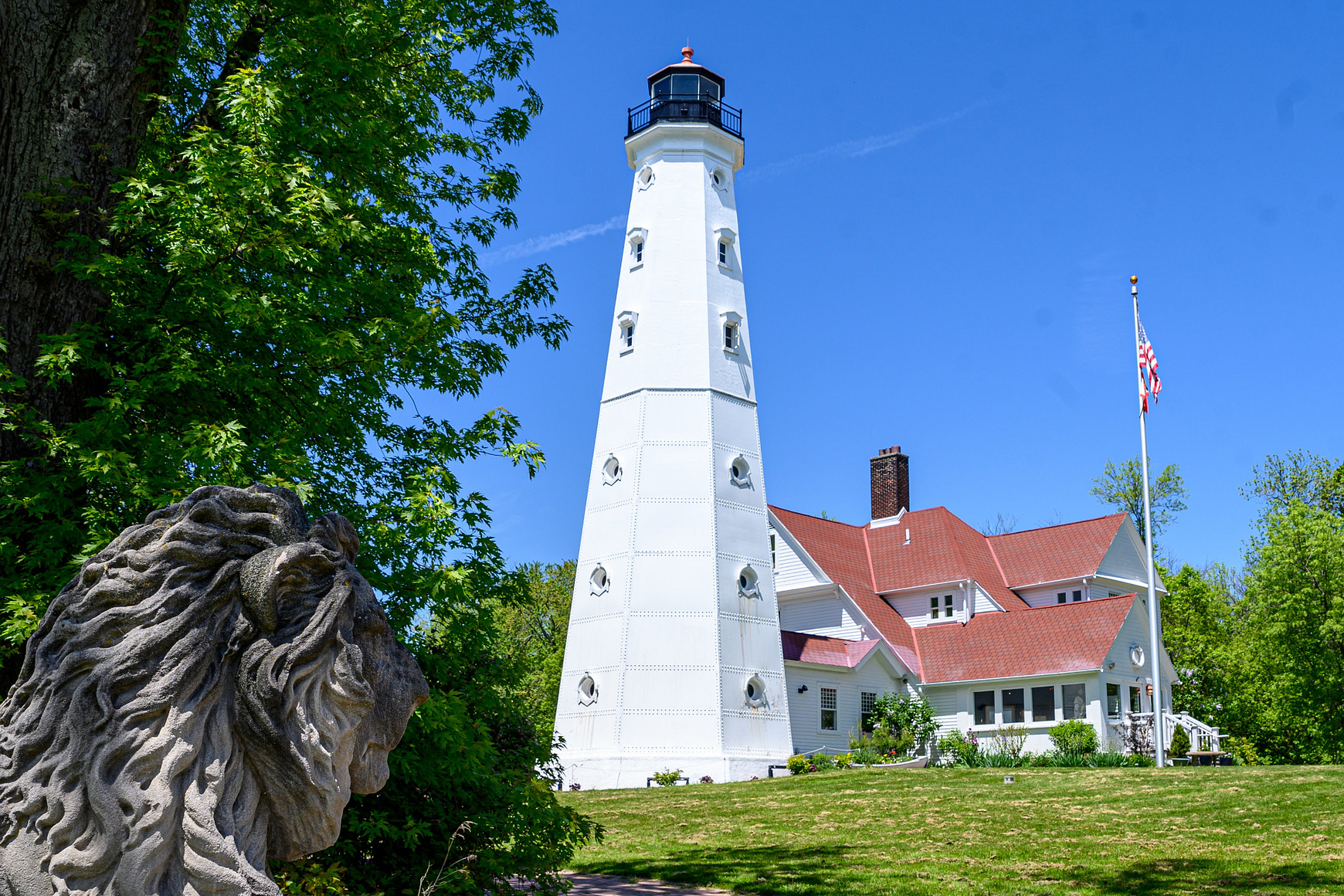 The tower at Milwaukee's North Point Lighthouse was put into service in 1912. The stone lion at left is part of the grounds' iconic "lion bridges" from an original carriage road dating to 1893.

At North Point Lighthouse in Milwaukee's Lake Park, a climb to the top of the 74-foot tower ends in a satisfying reward: stunning views of Lake Michigan and the surrounding lakeshore and urban landscape.

The historic lighthouse, taken out of service by the U.S. Coast Guard in 1994, is owned by Milwaukee County and leased to the North Point Lighthouse Friends for management. It offers public tours, with a museum and gift shop, and can be rented for private events.

Visitors have been able to enjoy the scenery from the lighthouse tower and grounds for more than a decade following the 2007 completion of lighthouse renovations led by the Friends Group and other partners. Before that could happen, however, the property first needed to be checked out and cleaned up.

The lighthouse, dating to the late-1800s, had once been covered in lead paint. Over time, flakes had fallen onto the surrounding ground and worked their way into the soil. Lead contamination registered at levels too high for human contact.

Addressing the problem was one of the first steps needed before renovations could begin to revive the weathered lighthouse. The Department of Natural Resources — specifically the DNR's Remediation and Redevelopment Program — assisted the Coast Guard and its environmental consultant to help oversee the project. A DNR letter of closure was issued in 2003 and plans to transform the property proceeded from there.

Renovations to the keeper's quarters and lighthouse tower restored these to their early 1900s appearance. An interior redesign added about 1,500 square feet of usable space and an accessible entrance was created on the north side.

Outside, in addition to the lead paint abatement, the lighthouse tower was taken down to bare metal, with rust removed, portals and windows refitted and reglazed, and the tower repainted. The lantern room was fitted with safeguards to accommodate visitors, and a covered passageway linking the lighthouse and keeper's quarters was restored to create a visitor entrance.

The original light, a fourth-order Fresnel lens dating to 1928, is on display in the keeper's quarters, as is an 800-pound fog bell. The lighthouse tower now features a symbolic low-wattage light installed for show.

The lighthouse in Milwaukee's East Side neighborhood is open for tours from 1 to 4 p.m. on Saturdays and Sundays throughout the year. Cost is $8 for adults; $5 for seniors, students and children age 5-11; and free for military and ages 4 and under.

Visitors can check out the museum with its many artifacts and exhibits, learn about the keepers who maintained the lighthouse and discover more Great Lakes maritime history. Group tours and lunch-plus-tour outings also are offered by reservation (call 414-332-6754).

And be sure to climb the lighthouse tower for that spectacular 360-degree view.

Two-for-one near state park and trail

At the opposite end of Milwaukee's lakefront, the easternmost section of the Hank Aaron State Trail features an especially striking urban stretch along Lake Michigan, including a loop through Lakeshore State Park in the shadow of the city's skyline.

Just as the trail bends to the west around the looming Summerfest amphitheater where the Kinnickinnic River flows from the city, it skirts a popular spot for photographs — a jutting pier with terrific views of not one but two historic lighthouses. 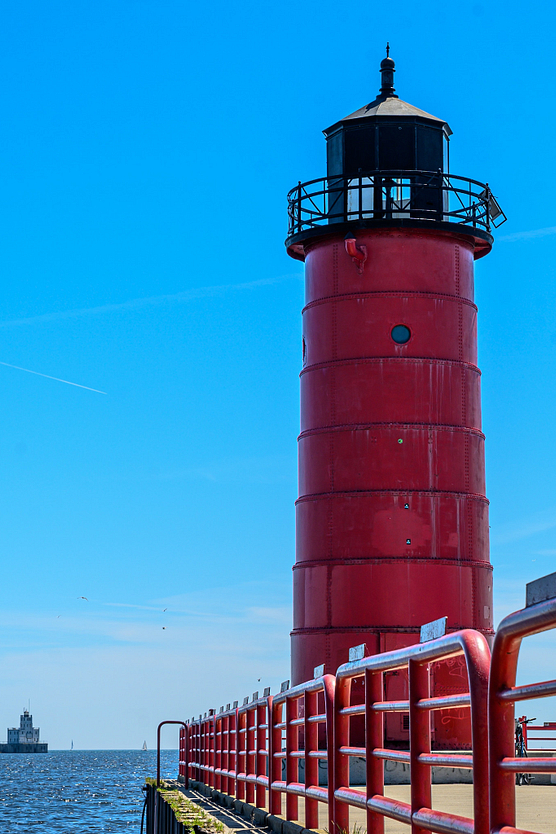 Just off the Hank Aaron State Trail, the Milwaukee Pierhead Light serves as a rest stop for bicyclists.

On the pier itself is the aptly named Milwaukee Pierhead Light, a distinctive red structure that dates to 1872. Almost directly east, several hundred yards out into the lake, is the Milwaukee Breakwater Lighthouse, whose square shape and windowed appearance accentuate the "house" in lighthouse.

Views of both lighthouses, located where the river empties into Lake Michigan, can be had from the Hank Aaron State Trail and Lakeshore State Park. The Breakwater Lighthouse is a bit distant but the Pierhead Light is ready for its closeup. Just hop off the bike or pause for a moment along the state trail and the Pierhead Light is only a few steps away.

The Milwaukee Pierhead Light had its own keeper until 1926, when the Breakwater Lighthouse opened. The Pierhead Light — a twin to the Kenosha North Pier Light some 40 miles south — remains a functioning lighthouse, now fitted with a solar-powered light and operated automatically.

The Pierhead Light's tower is not open, but the surrounding pier is accessible, including for fishing. The lighthouse is listed on the National Register of Historic Places.

The Milwaukee Breakwater Lighthouse has been privately owned for the past several years, though it still serves as an active navigational beacon. Reachable only by boat, the site is not currently open to the public and earlier plans to restore it for use have yet to advance.

Andrea Zani is managing editor of Wisconsin Natural Resources magazine. Evan Halpop is a freelance photographer and student at UW-Whitewater.

North Point Lighthouse, 2650 North Wahl Ave., is on Lake Michigan in Lake Park, near Bradford Beach. For information, see North Point Lighthouse. The Pierhead Light is accessible at the end of East Erie Street, where the Hank Aaron State Trail passes by just south of the Summerfest grounds. A small number of parking stalls are available near the pier. Look almost due east to see the Breakwater Lighthouse offshore.