Following a federal court ruling on Feb. 10, 2022, gray wolves are listed as an endangered species in the lower 48 states (excluding the northern Rocky Mountains region). As such, wolves are federally protected. Harvest and lethal depredation control are prohibited.

Wisconsin’s wolf population remains healthy and secure in the state. The department will continue its robust wolf population monitoring program and the development of an updated wolf management plan. The DNR will continue to partner with USDA-Wildlife Services to address wolf conflicts in Wisconsin.

If you suspect wolves in the depredation of livestock, pets or hunting dogs, or if wolves are exhibiting threatening or dangerous behavior, contact USDA-Wildlife Services staff immediately. If in northern Wisconsin, call 1-800-228-1368 or 715-369-5221; if in southern Wisconsin, call 1-800-433-0663 or 920-324-4514. While gray wolves are listed as a federally endangered species, it remains unlawful to shoot a wolf unless there is an immediate threat to human safety.

To find out how many points you have accumulated, log in to your Go Wild account and look under "Applications and Points" on your home page.

As identified in state statute, wolf harvest licenses are issued through an application and 2-stage drawing process. The initial drawing for 50% of the available licenses is issued through a random lottery in which all applicants are entered. The remaining 50% of the available licenses are issued based on the cumulative preference points of applicants, which provides unsuccessful applicants from prior years a greater chance to obtain a license. Residency status does not influence the drawing. Each awarded license, once purchased, allows the licensed hunter or trapper to harvest one wolf by any legal method.

Information on past regulated wolf harvest seasons in Wisconsin is available in the reports below.

While gray wolves and coyotes may look alike at first glance, hunters and trappers can look for several traits to identify their target species: 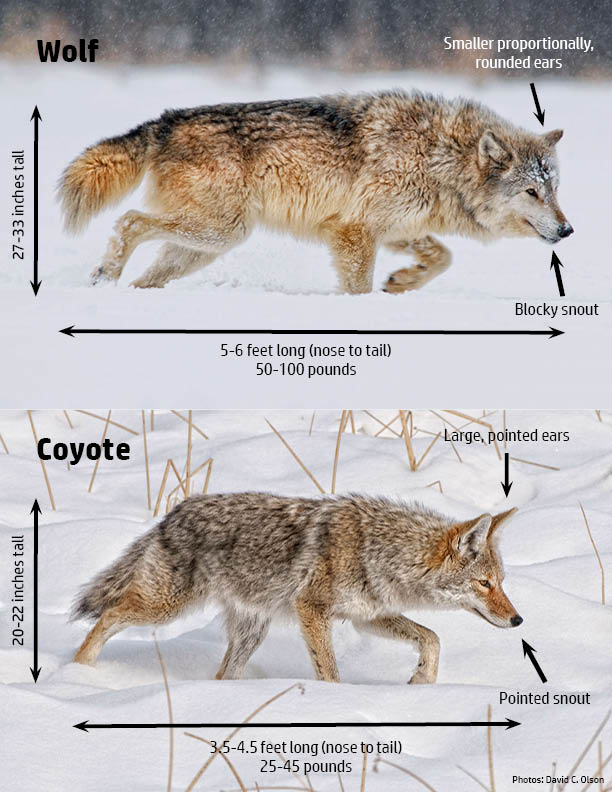