White pine torching with flame lengths reported to be 20–30 feet high. The Germann Road Fire consumed 7,499 acres and destroyed 104 structures (23 of them residences) in the Towns of Gordon and Highland in Douglas County and the Town of Barnes in Bayfield County. An estimated 350 structures were saved due to fire control efforts. The fire began around 2:45 p.m. on May 14, 2013, burning a swath nearly 10 miles long and a mile and a half wide before being declared 100 percent contained on May 15 at 9 p.m. The fire was started unintentionally from a logging crew harvesting timber on industrial timber lands. Learn more about the Germann Road Fire.

This wildfire began on May 5 in northern Adams County. The fire rapidly spread through grass, needles and brush to the tops of the pine trees close by. Utilized resourced included 38 tractor plows, 25 forest rangers with Type-7 4x4s, three low ground units, six heavy dozers and almost 200 DNR personnel to control and eventually suppress the wildfire. Air resources cooled the flanks for ground crews and dropped water and fire retardant on structures. The fire was finally contained after 3,410 acres had burned. Nine year-round residences, 21 seasonal homes and at least 60 outbuildings were completely destroyed, but an estimated 300 buildings were saved.

On April 14, a wildfire began in northern Marquette County near the Lake of the Woods campground. Between 50 and 100 camper trailers in the campground and 24 homes and outbuildings in the area were directly threatened by the fire but ultimately saved with the help of 17 local fire department engines and tankers, DNR engines, bulldozers, aircraft and air tankers and private bulldozers. The fire eventually burned 572 acres and was determined to have been caused by debris burning.

The White River Marsh wildlife area is a 12,000 acre property located in Green Lake and Marquette counties. A man hunting on the property filled a metal coffee can with charcoal to have in his tree stand to keep warm. On November 20 (the Monday of deer season), he wasn't hunting and the winds were so strong it blew the tree over with the tree stand in it, which dumped the charcoal, resulting in a wildfire burning 4,261 acres.

The Ekdall Church Fire began on April 21 and ran nine miles in less than eight hours. At its widest point, the fire front was 2.5 miles wide. Fifteen DNR tractor plow units, seven fire departments, 27 private, county and National Guard bulldozers as well as scores of volunteers and cooperators from other county, state and federal agencies were utilized in containment of the fire. While 73 homes, cabins and outbuildings were destroyed in the 4,654 acre blaze, another 65 buildings were saved as a result of firefighter actions. The cause of the Ekdall Church Fire was determined to be accidental in nature.

Over 2,000 firefighters worked the Oak Lake Fire, which began on April 22 and included 23 fire departments, 52 DNR fire trucks, 30 DNR tractor plow units and 52 federal, county and privately owned bulldozers. While 159 structures (homes, cabins and outbuildings) were lost in the fire, an estimated 254 were saved as a direct result of firefighter actions. While a cause was never proved for the Oak Lake Fire, it was thought to most likely be equipment related. Note that the Ekdall Church Fire and Oak Lake Fire burned over 16,000 acres in northwestern Wisconsin.

Fifteen tractor plows, 18 bulldozers, 12 fire departments and about 100 men and women worked on the fire, which began on April 27 and burned a total 6,159 acres. Five homes, one house trailer, 10 barns and 84 out buildings were destroyed, but approximately 300 buildings were saved. Total damages were over a million dollars.

On the same day as the Saratoga Fire, a westbound Chicago and Northwestern train began setting fires three to four miles east of Black River Falls and continued igniting areas along the track almost all the way to the city before the train was finally stopped. Calls were immediately sent out to the adjacent areas for additional equipment, but because of the Saratoga Fire, these fires were short on tractor plows. The series of fires ultimately combined together to form one large fire, named Brockway. Later in the afternoon, an illegal cooking fire escaped and joined the railroad fires. The Brockway Fire was finally controlled after burning 17,590 acres with damages over $1,400,000, including the loss of 14 homes.

The mop-up of the Saratoga and Brockway Fires was progressing rather well on the early afternoon of April 30 when two more fires broke out in the Black River Falls area. One fire started when a chain saw exploded in an area of heavy slash. Windy conditions drove this fire fast toward the Village of Brockway and Black River Falls, causing 1,500 people to evacuate. About 75 minutes later another fire, believed to have been intentionally set as a backfire on private property, started alongside the first fire. These fires ended up burning together, threatening to destroy dozens of homes in its path. With the assistance of 63 fire departments, no buildings were lost after the fire consumed 3,037 acres.

The Five Mile Tower fire burned in young pine. Around the same time the Airport Fire started, a family was camping just west of Minong in an area surrounded by jack pine when a spark blew out of their campfire. This fire would eventually burn 13,375 acres of pine forest and was about 15 miles long at its longest point. Embers were reported to have flown over a mile ahead of the fire, causing many additional "spot" fires. The fire was controlled after 83 buildings were destroyed, but over 300 buildings survived the fire.

Fire conditions were extreme in Burnett County as the previous winter had practically no snow accumulation. On May 1, 1959, extra personnel were on standby at each station, as well as standby fire crews located at various points in the area. At 1:35 p.m., with 3 other fires burning at the time, the Grantsburg Ranger Station reported that they were heading to assist Grantsburg Fire Department on a structure fire. As units arrived, fire had spread away from the house and into a swamp. The fire was finally put under control at 9:30 p.m. on May 2 with the help of virtually every available fire fighter, fire department and heavy equipment in a four-county area, but not before burning 17,560 acres, and causing over $200,000 of forest and property damage.

On October 8, 1871, the deadliest wildfire in American history burned 1.2 million acres in Northeast Wisconsin. Burning through at least 17 towns on both sides of Green Bay, the Peshtigo Fire caused an estimated $169 million in damages. Twelve hundred lives were lost during the inferno, 800 of which perished in Peshtigo alone. It is said that the city of Peshtigo was lost in an hour. Survivors reported that the fire was caused by railroad workers clearing land for tracks, but we may never know if that is true or not. Because the Peshtigo Fire happened on the same night as the Great Chicago Fire, it is lesser known outside of the Great Lakes region.

2016
Wisconsin retires its lookout towers. The state augments citizen reporting with increased aerial detection.
1995
State begins a trial program with a local agriculture pilot, Jim Stutesman, to use single engine air tankers for in-state fires.
1990s
Throughout the 1990s, an average of 1,600 fires burn 3,400 acres each year. Debris burning is the leading cause of forest fires.
1982
Motivated by the death of a DNR tractor plow operator on a fire in Eau Claire County, a "shower" system was installed on all fire control tractor plows. This shower system consisted of a series of 10 spray nozzles around the canopy of the dozer that is connected to the water tanks and pump. This advancement gives the operator about 10 minutes of protective water and time to exit the fire.
1977
Nearly the entire fleet of tractor/plows were replaced with new John Deere 450s. These new dozers had a front blade and a totally hydraulic plow which was mounted to the dozer to give them better maneuverability.
1975
Wisconsin begins to use the National Fire Danger Rating System to help predict the intensity and spread of wildfires under different weather conditions.
1970s
Wildfire agencies across the country begin to move from a fire control approach to a fire management approach. They begin to understand that there are differences between good fires and bad fires, and start to manage ecosystems accordingly.
1960s
Throughout the 1960s, an average of 1,880 fires burn 8,700 acres each year. Railroads are the leading cause of fire.
1951
Rosamond Lee becomes the first woman to fulfill duties as a smoke-watcher in the Rockstad Tower near Drummond, WI.
1950
Torchy Timberloss, Wisconsin's wildfire prevention character makes his first appearance in the Wisconsin Conservation Bulletin.

W.S. Carow, Bernard Klugow and Frank Brunner design the first documented life-sized Smokey Bear for a float in the Fireman's Convention Parade in Hurley, WI. After the great success in the Hurley parade, the three decide to create the first Smokey Bear suit and commissioned Ada Hart and Neal Long to help build the suit. The suit made its debut at the Wausau Logging Congress Parade on September 28, 1950 bringing the famed fire prevention character to life.
1948
Aldo Leopold, author of A Sand County Almanac, dies fighting a grass fire between Portage and Baraboo on April 28.
1938
Wisconsin begins the use of two-way radios for forest protection work.
1936
Chartered aircraft are used for detecting new fires and reconnaissance on fires.
1935
The tractor/plow is established as standard fire suppression equipment. Dramatically fewer large wildfires occur.
1933
The Civilian Conservation Corps (CCC) provides increased firefighting and completes essential improvements in fire protection efforts by building standard lookout towers, fire lanes and bridges.
1931
Wisconsin funds the construction of fire lanes to give firefighters access to roadless areas of its forests.

On April 28, 1931 the Ada Lake lookout tower in Forest County blew over killing the towerman in high winds. In October the Conservation Department established an Engineering Division which designed new towers in hopes of preventing similar tragedies. They began to replace the old windmill type in 1932.

In the fall, Wisconsin contracted two licensed radio amateurs to provide a communication link between the South Bluff Tower and Friendship Ranger Station until a telephone line could be constructed.
1930-34
The Dust Bowl Era brings severe droughts to the state. During this time about 2,950 fires burn 336,000 acres annually in Wisconsin.
1925
A new burning permit law is enacted, requiring citizens to obtain a written permit before setting any fires in a protection district when the ground is not snow-covered.
1924
P.A. McDonald is the first Wisconsin ranger to field test the back pack water pump still commonly used today. He also ordered an Evinrude Portable Water Pump and mounted it on his truck. He attached a water tank to it for initial attack on a fire. This is the first known use of a portable gasoline water pump for fighting fires in Wisconsin.
1919
Wisconsin establishes fire protection districts.
1915
Jack Vilas pilots the first forest fire patrol flight from Trout Lake. For the first time in Wisconsin's history, it is possible to detect fires from the air.
1914
National Fire Prevention Day inaugurated.
1911
First forest rangers hired. The forest protection headquarters is established at Trout Lake. From this point through the late 1920s organized protection spreads across the state as ranger stations and lookout towers are constructed.
1905
Forest fire control begins, marked by appointing 249 town fire wardens around the state. While they have authority to hire firefighters, they have no equipment.
1854
A single wildfire runs from Amery to Iron River, a distance of 140 miles.
1850
Railroad construction begins. The first railroad into northern Wisconsin, the Wisconsin Central is built in 1870.
1820
The first European settlements are built in southwest Wisconsin. Much of the timber is cut and burned to make room for agriculture. 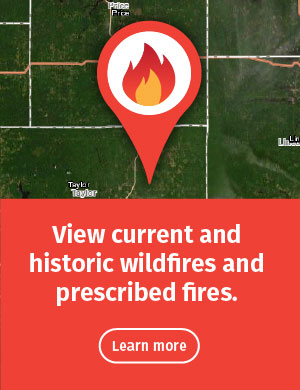