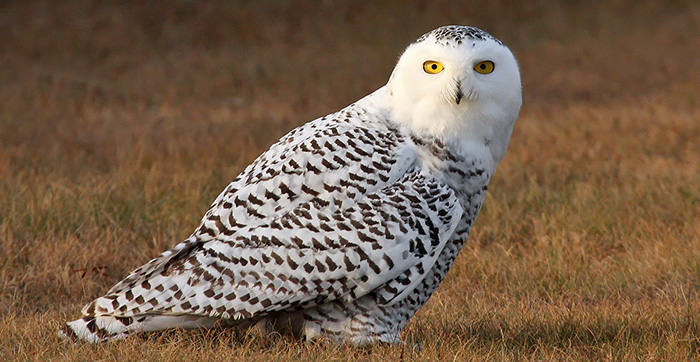 Snowy owls rank among the most charismatic wildlife species in the world. The heaviest of all North American owls, tipping the scales at 3 to 6 pounds, their bright white plumage, large yellow eyes, massive feathered feet and diurnal tendencies appeal to even the most casual nature lover. Equally appealing to some are their unpredictable movement patterns and the remote arctic wilderness they represent.

As their name suggests, snowy owls are generally a northern species, nesting worldwide on the treeless tundra above the Arctic Circle. During a typical winter, some remain close to their breeding areas while others head south into southern Canada and the northern United States. At least small numbers reach Wisconsin each year. However, large numbers move into the state every few years, an event known as an "irruption."

As of Nov. 2, snowy owl season is underway across Wisconsin despite mild fall weather. One individual was found in Dane County in mid-July (!) and regularly spotted into mid-October, marking a very rare case of an individual successfully over-summering in the state. The first likely migrants were spotted on Oct. 19 in Superior and atop the observation tower at Rib Mountain State Park in Marathon County. Another was photographed in Ashland on Nov. 1.

These are the only new arrivals reported anywhere in the lower 48 so far, aside from one along the international border in North Dakota. Eastern Canada has seen a notable shortage of observations so far, while farther west, a few owls have moved into the Canadian Great Plains. View a map of observations (free account required).

What does this mean for your chances of spotting a snowy owl in the winter ahead? We don't know yet. Predicting the movements of snowy owls is difficult due to limited information on prey availability and nest success at their remote breeding sites in the Arctic. November is typically the most telling of what numbers the winter will hold, so by month's end, we should have a better idea of this year's outlook.

Until then, grab your binoculars, hit the field using our tips below and report your observations. Good luck!

Causes of an irruption

In short, no one knows with certainty. Most experts agree these periodic mass movements are associated in some way with their primary northern prey source, a small rodent known as a lemming. Traditional thought suggested that a temporary "crash," or shortage, of lemmings pushes owls southward in search of food. However, more recent evidence suggests nearly the opposite, that a temporary abundance of lemmings allows the owls to raise large families successfully. These young owls then disperse southward by the hundreds to avoid competition with older birds for winter territories.

It's even possible, perhaps likely, that not all irruptions are created equal, and both mechanisms play out in some years. Unfortunately, the population dynamics of lemmings are complex and poorly understood. The same can be said for snowy owls, largely because of the remote northern haunts they occupy most of the year. This no doubt elevates their intrigue but is a barrier to understanding and ultimately conserving the species.

Contrary to popular myth, it's not all doom and gloom when snowy owls visit the lower 48 in large numbers. The notion that "they're all starving" is outdated and erroneous. Many experts believe [exit DNR] -- and have the data to support it -- that many of the birds fare quite well during their time here, aside from impacts of anthropogenic mortality sources such as collisions with vehicles, electrocution, secondary rodenticide poisoning and illegal shooting.

On the other hand, there are also good data from wildlife rehabilitators and elsewhere to show that in some irruptions, perhaps a majority even, arrive in southern wintering areas in poor body condition, exhausted or emaciated from the long journey. Some of them will recuperate upon arrival. Others will perish. Unfortunately, such is the way of all migratory birds, whose fate we don't often follow with such watchful eyes. For example, juvenile raptors typically have a mortality rate near 70% in their first year. Overall, it's complicated [exit DNR].

Tips for finding one - know their habits

Seeing a snowy owl in the wild is a thrilling experience and is highly sought after by many birders and non-birders alike. You can improve your chances by understanding the species' habits. In short, check low-level perches in open habitats around dawn or dusk from November to March. Keep reading for more details.

Snowy owls usually seek open habitats like the arctic tundra they call home. Typical habitats include coastal beaches and harbors, open grasslands and agricultural fields, wetland complexes, airports and vast expanses of ice-covered water bodies. However, they are not opposed to civilization and are often found in suburban or urban settings.

In these habitats, they'll roost on just about anything, including the ground, haybales, fenceposts, telephone poles, rocky breakwalls, muskrat houses, trees and snags, silos and other structures. Beware of white plastic bags, which, as too many birdwatchers can attest to, are far more common than the real thing!

From these perches, snowy owls seek nearly anything that moves. Their diet varies, though many target voles, mice, shrews and other small lemming-like rodents for food. Ducks and other waterbirds are surprisingly common prey sources, while rabbits, weasels, muskrats, pigeons and other birds are also regularly taken.

Unlike many other owl species, snowy owls are notorious for being diurnal or active during the day. This makes sense for a bird that nests in the perpetual daylight of an Arctic summer. However, during the winter, the birds tend to be most active at crepuscular periods, or around dawn and dusk. Some hunt throughout the darkness of night, while others are pretty active in broad daylight. Bottom line? You can see one any time of day, though dawn and dusk may improve your chances.

In most years, snowy owls arrive around mid-November and depart by the end of March. Some years they arrive as early as mid-October and linger well into April or even May. Early-season birds are often on the move and can't be relocated in the same location day after day. By later in December and January, most establish winter territories that hold them to a smaller area.

eBird [exit DNR] is an online program for reporting and viewing bird observations worldwide. One of its features is to Explore Data, where among other options, you can select a customized species map that shows all the snowy owls that have been seen and reported to eBird. Consulting the map of recent observations can be a good way to determine where and when the birds have been seen.

Like some of the species, they follow birders and tend to be a gregarious bunch. Listserves, Facebook groups, and other online forums are excellent ways to learn about who's seeing what and where. Find some of these resources online [exit DNR].

Like all birds, snowy owls deserve our care and respect when viewing them. Some may be exhausted or even emaciated from their flight south, others may be battling the hardship of a Wisconsin winter and all will fare better if we give them adequate space to hunt and rest free of disturbance. Some general recommendations for observing snowy owls include:

In many cases, you may not be the only person to see the owl, and the cumulative impacts of these repeated actions can be especially harmful. Please visit the Wisconsin Society for Ornithology's Code of Ethics [exit DNR] for more details.