Lake Superior and Lake Michigan have fueled our economic growth; their water is vital for manufacturing businesses and they are the foundation of a valuable tourism industry. More than 250,000 anglers enjoy their sport fishing opportunities. Their harbors and marinas support a $9.4 billion dollar a year recreational boating industry. The lakes serve as a wet highway linking the heartland to global markets with major shipping ports in Green Bay, Milwaukee and Duluth/Superior. More than $7 billion worth of cargo passes through Wisconsin ports each year.

Lake Superior and Lake Michigan also support diverse aquatic and near–shore habitats. Sandy beaches, rocky shorelines, wetlands and the world's largest freshwater dune system can all be found here. Each of these habitats and their collection of plants is unique. Some are found nowhere else on Earth.

Lake Superior covers 31,700 square miles and holds as much water as Lakes Michigan, Huron, Erie and Ontario combined, with room left over for three extra Lake Eries. It also holds many national treasures like the Apostle Islands and many state parks and recreational areas. The pristine waters and picturesque landscapes draw tourists from all over the world to enjoy the many outdoor recreation and scenic opportunities. Even though it is the most pristine of the Great Lakes, Lake Superior is still threatened by sedimentation and by toxic pollutants that bioaccumulate in the food chain and persist in the environment. 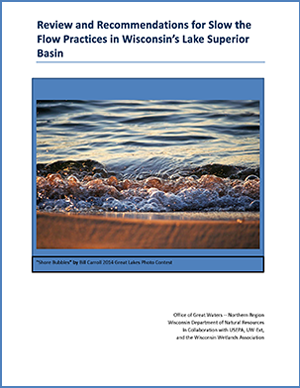 The report, Review and Recommendations for Slow the Flow Practices in Wisconsin’s Lake Superior Basin, provides a strategic watershed approach to reduce excessive water runoff that causes tons of sediment to erode into Lake Superior.

Watersheds in the Wisconsin portion of the Lake Superior basin, specifically those in the red clay plains, are susceptible to from eroding stream banks, bluffs and valleys, which can harm aquatic habitats and degrade water quality due to excessive sediment loading. This report summarizes an extensive literature overview to inform strategic slow the flow efforts and identify conservation priorities in Wisconsin’s portion of the Lake Superior basin. 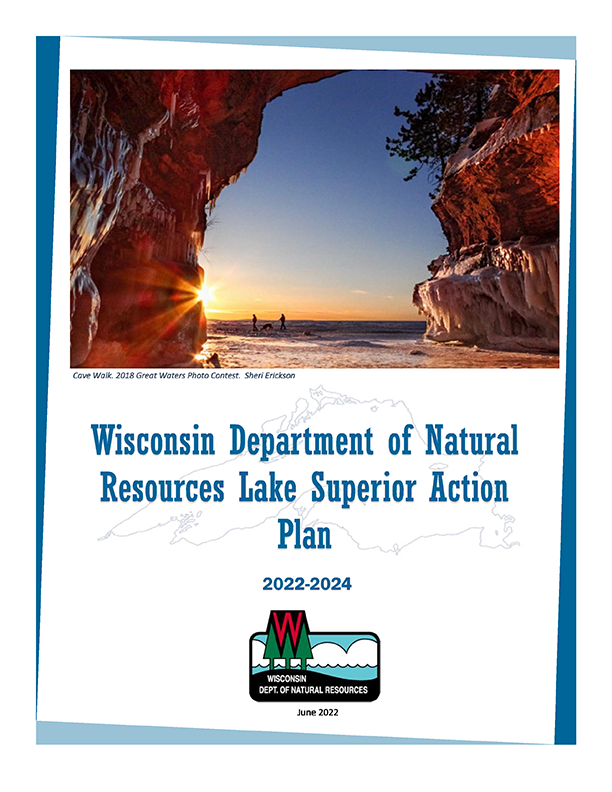 The Wisconsin DNR Lake Superior Action Plan establishes priorities for Wisconsin's portion of the Lake Superior basin and identifies actions that DNR will take to accomplish objectives in the binational Lakewide Action and Management Plan and Great Lakes Water Quality Agreement. The priorities and actions identified by the DNR's resource managers also align with other existing regional plans. They were developed in partnership with landowners, communities, and other agencies and organizations in the Lake Superior basin.

The second largest of the Great Lakes, Lake Michigan has a surface area of 22,300 square miles, making it the largest freshwater lake in the U.S. and the fifth largest lake in the world. Lake Michigan is Wisconsin's "working lake" and is a critical part of Wisconsin's economy. The availability of water and an inexpensive, easy way to transport goods brought many industries to the shores and tributaries of Lake Michigan. Lake Michigan cities also benefit from charter fishing, recreational boating and marina activity. Lake Michigan's beautiful and diverse shoreline – from the sandy beaches of Racine, to the sand dunes of Sheboygan, to the rocky shores of Door County – offers some of the state's most popular tourist destinations. Lake Michigan has been impacted by many human activities and significant efforts are needed to restore this magnificent resource.