Class I areas receive extra protection from the impacts of air pollution. The classification was established under the Clean Air Act prevention of significant deterioration (PSD) program to limit the amount of additional pollution to these areas resulting from construction or modification of major sources of air emissions. Under the PSD program, there are three levels of air quality protection: Class I, Class II and Class III. Class I status allows the most protection of air quality. Most areas throughout the United States are Class II areas. There are no Class III areas.

The PSD program was devised by the U.S. Environmental Protection Agency (EPA) in order to permit economic growth in a manner consistent with the preservation of air quality in areas meeting the national ambient air quality standards (NAAQS). A PSD permit applicant must demonstrate that emissions from the proposed construction and operation of a facility will not cause, or contribute to, air pollution in excess of any maximum allowable increase for any pollutant. The maximum allowable increase of an air pollutant that is allowed to occur is known as the PSD increment. By establishing the maximum allowable level of increase of ambient pollutant concentration in a particular area, an increment defines significant deterioration of air quality in that area.

In addition, Class I area land manager agency responsibilities include the review of permit applications from proposed new or modified major pollution sources to determine if emissions from the source will cause or contribute to adverse impacts on air quality related values (AQRVs) of the Class I area. The AQRVs are resources, identified by the Class I area land manager agencies, that have the potential to be affected by air pollution. These resources may include visibility, scenic, cultural, physical or ecological resources for a particular area.

Types of Class I areas

The Class I areas in Wisconsin [PDF] are Rainbow Lake Wilderness Area in Bayfield County and the Forest County Potawatomi Community (FCPC) Reservation located near Crandon. Class I areas in neighboring states include the Boundary Waters Canoe Area Wilderness and Voyageurs National Park in northern Minnesota, and Seney National Wildlife Refuge and Isle Royale National Park in northern Michigan. The Bad River Band of Lake Superior Chippewa (located near Ashland, Wis.) and the Fond du Lac Band of Lake Superior Chippewa (located in Minnesota approximately 20 miles west of Superior, Wis.) are pursuing redesignation of their reservations to Class I status. 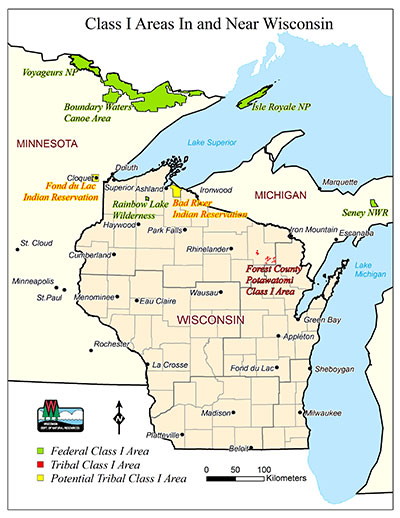 Requirements for major construction and modification near Class I areas

Any PSD source that is undergoing a major construction or modification project must perform a significance analysis for the increase in emissions. For each pollutant, the maximum impact for each time period is compared to the respective Class I significant impact level (SIL). If the impact of the increase in emissions is less than the SIL for all pollutants, the source is presumed to not contribute to a violation of the PSD increments, and no further increment analysis is required. For further information, consult the Wisconsin Air Dispersion Modeling Guidelines (AM-528) [PDF].

Effective May 29, 2008, the Forest County Potawatomi Community (FCPC) Reservation located near Crandon, Wisconsin, was redesignated by U.S. EPA as a nonfederal Class I area. Prior to the redesignation, the state of Wisconsin and FCPC signed a 1999 Class I Final Agreement [PDF] that resolved the dispute between the state and the FCPC regarding the redesignation. The agreement also outlines implementation of Class I status for the FCPC Reservation.

According to the 1999 Class I Final Agreement, the DNR will notify the FCPC of all new proposed PSD permit applications for facilities located within a 62-mile radius of the FCPC Class I area and these facilities may be subject to an AQRV effects analysis. The FCPC is responsible for performing the analysis, although the state may require the permit applicant to perform the analysis as part of a complete application. In either event, the permit applicant is required to provide all information necessary to conduct or review an AQRV effects analysis. For facilities outside the 62-mile radius, the DNR recommends that PSD applicants contact the FCPC air program manager to determine if the facility will have an impact on the community's Class I AQRVs.

In addition to notification requirements for PSD permit applications, the final agreement includes the following provisions:

The FCPC Class I area, as defined by U.S. EPA, and the 10-mile and 62-mile boundaries are shown in this map [PDF].

In October 2010, the DNR and FCPC signed a Memorandum of Understanding [PDF] to further define the roles and responsibilities for the state and the tribe that were established in the 1999 final agreement. The DNR and FCPC have subsequently signed several addenda to the memorandum. The third and fifth addenda list the AQRVs and associated thresholds that have been recognized by the DNR.

To learn more about the FCPC Class I Area, refer to the air permitting page of the Forest County Potawatomi Community [exit DNR] or contact the following FCPC and DNR staff:

In May 2014, the Bad River Band notified the state of Wisconsin of its intent to request that U.S. EPA change the air quality status of its reservation in northern Wisconsin from Class II to Class I under the federal Clean Air Act.

In August 2014, the Fond du Lac Band of Lake Superior Chippewa notified the DNR of its intent to request that the U.S. EPA change the air quality status of its reservation from Class II to Class I under the federal Clean Air Act. The reservation is located in northeastern Minnesota approximately 20 miles west of Superior, Wisconsin.