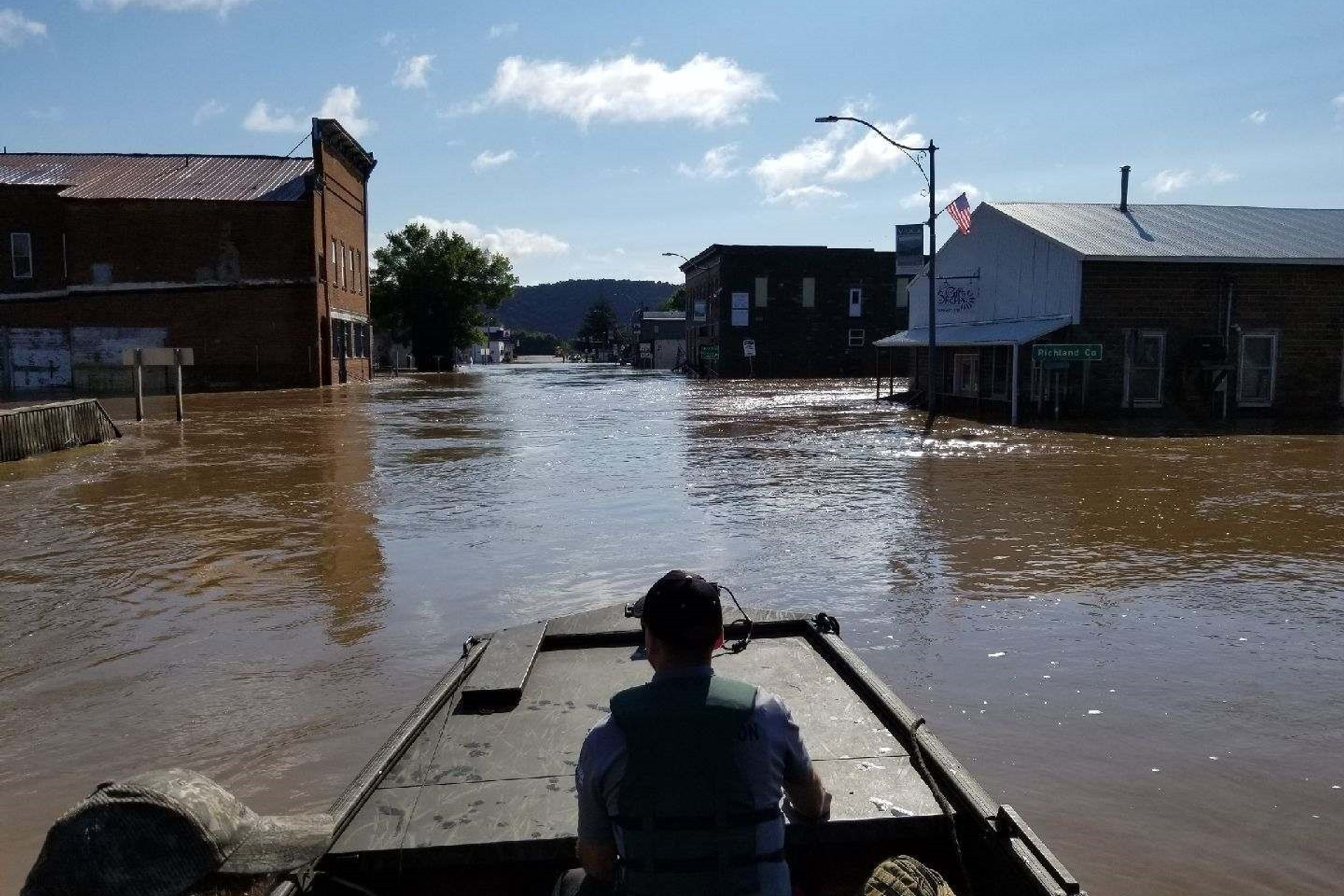 Warden Jake Holsclaw scans the flooded streets of Viola for signs of people in need of help.
© NICK WEBSTER

In southern Wisconsin, Aug. 28 was yet another in a string of late August days punctuated by record rainfalls, damaging storms, historic floods and property damage.

The latest storm line had especially targeted Vernon County, south of La Crosse. In the communities of La Farge and Viola — rural areas of about 700 each along the Kickapoo River — floodwaters roared through with a fury and force that unearthed buildings, sent fuel tanks floating, downed electric lines and more.

DNR conservation wardens responded to call after call to help stranded residents. In hindsight, they say those missions rank among the scariest of their careers.

It was mid-afternoon on that Tuesday when the Vernon County dispatch called for help from Wardens Shawna Stringham and Ed McCann, who were staged in La Farge and skilled in water rescues thanks to countless hours patrolling the Mississippi River. The wardens used their shallow-water boat with a mud motor to respond when floodwaters began overwhelming the village.

McCann had driven through La Farge before but that was in his truck — on dry land.

"I have never driven my boat in a city before. The water was raging. It was moving fast, like rapids," McCann said.

Operating a boat in swift water is nothing like driving a boat in smoother waters, Stringham added. First, the boat operator must find a place to launch — forget the docks.

"We put the boat in just off the highway," she said. "You have to know what you are doing in these conditions. There were electric lines coming in the water all around and things like propane tanks going by."

The wardens' first stop was to get three adults and a dog out of a home and back to dry land, then it was right back out to get another adult and a dog. After that, they started checking other homes and came upon a mother and her two children who needed help.

Their work in La Farge wasn't the end, though, not even close. In the early hours of Wednesday morning, the two wardens left La Farge with their shallow-water boat and headed for Viola to meet DNR Wardens Cody Adams and Aaron Koshatka for more rescues on the raging Kickapoo River.

"We ended up rescuing about eight or 10 more people in the dark," McCann said. "It was quite possibly the scariest thing I've done in my career. We had to take a moment at the end to think about how lucky we were."

The darkness was what made those Viola rescues so harrowing, Adams added. "There are trees down, high power lines, things in the water — it is so much more dangerous to try and get people at night."

And don't forget the incredible strength of the flood's current.

"Although (La Farge) was scary, the events of Viola topped it all," McCann said.

Adams, who grew up in southwestern Wisconsin, has seen his share of flood rescues in his 10 years as a DNR conservation warden. But this was by far the most extreme. "I have never seen anything like this in Viola."

The wardens worked with local officials such as the Viola Fire Department on rescues that in one case included carrying an 85-year-old man to the boat.

"The Viola Fire Department was incredible," Adams said. "We never would have been able to do the rescues without them."

Koshatka, a new warden, said it was "phenomenal" to watch the DNR in action and see how the agency was able to provide resources to help. Adams recalled how the wardens had to manage communication issues and logistics while looking out for objects in the darkness in the rushing water.

And Adams said in addition to the rescues, he will remember one truly wonderful thing.

"One of the things we heard from people we rescued was, 'We have nowhere to go.' When we got them to shore, the community was there," he said. "There were first responders and citizens with private cars there to help anyone. It was incredible the way these communities come together and help."

In floods and a tornado

Other communities in southern Wisconsin also were affected by the Aug. 28 storms and flooding — and helped by DNR wardens and others. Lt. Mike Green, who heads the Sauk Warden Team, assisted the Sauk County Sheriff's Department in searching back roads and backwaters for stranded people when floodwaters from torrential rains overwhelmed the village of La Valle, near Reedsburg. 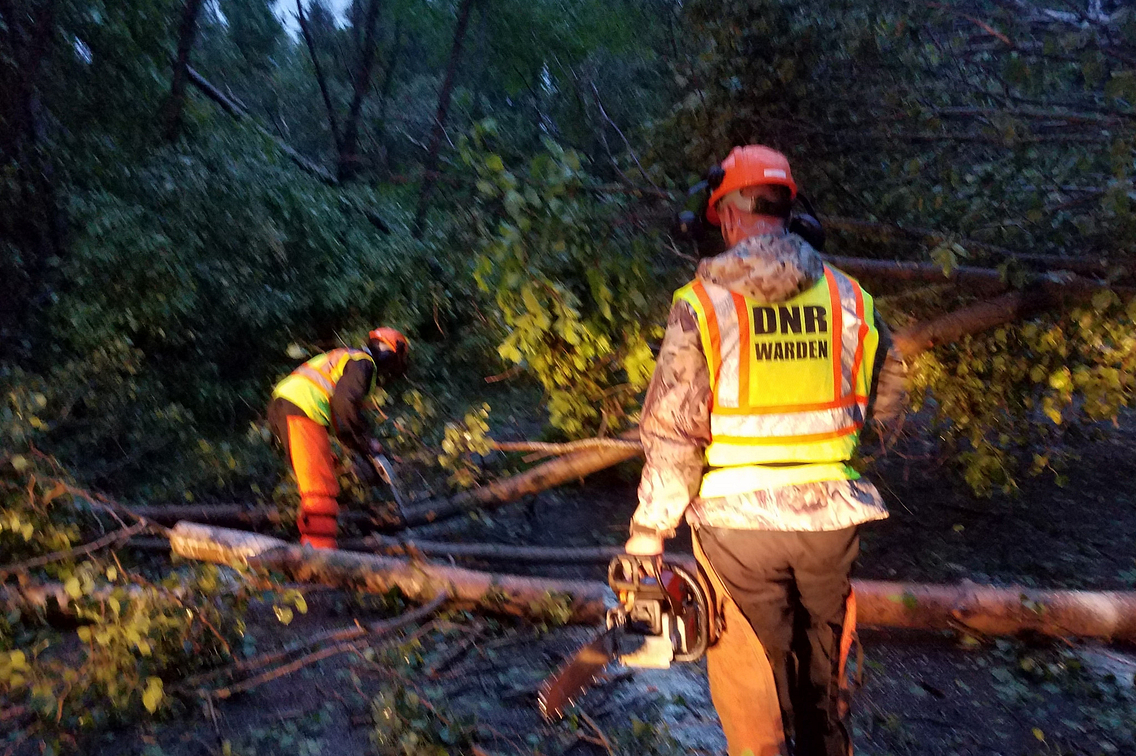 Further east, at the Kettle Moraine State Forest-Northern Unit, nearly a dozen DNR staff responded along with local officials after a tornado touched down at the property. The twister blasted through the Long Lake campground, home to 200 mostly wooded sites.

"At least half of the campsites had trees on top of them," Lt. Joe Jerich said. "It was a lot of downed trees — a lot. The good thing was since it was a weekday, the campground was not as busy."

Together staff cleared debris and checked campsites, verifying no one was injured. Then they cleared a path, with those who were certified manning chainsaws, so campground users and staff could get out safely. Teamwork!

This in no way names all the DNR staff who helped during and after those Aug. 28 storms, which felled trees and dumped incredible rains. Many wardens jumped in to offer aid all over the place, as usual. They just do this in all sorts of conditions — sometimes at their own peril.

Dramatic rescue on the Sugar River

In Dane County a week earlier, one death was attributed to raging floodwaters at a Madison intersection during storms on Aug. 20. Another potential tragedy was averted during that same storm, however — thanks in part to the preparedness and expert boat handling of DNR Conservation Warden Jake Donar.

Donar was finishing his shift around midnight when he got the Dane County emergency call about a man in trouble at the Sugar River, near the Military Ridge State Trail. Dane County Sheriff's deputies arrived on the scene to find the man sitting on top of his car, stuck in rising floodwaters. And not just that, but his leg was pinned in the car.

"Nobody could get to him because of the ripping current," Donar said. "And the water was rising rapidly."

The emergency responders requested a swift-water boat. Donar raced to the DNR's Fitchburg Service Center to get his flat-bottom boat and grabbed enough life jackets for all. Meanwhile, back at the river, emergency responders were able to toss the trapped man a flotation ring.

Donar arrived with the boat and dropped it in the rising, rushing waters. Then he and two sheriff's deputies sped into the raging dark waters. Donar tapped his training and knew exactly how to operate the boat in the harrowing conditions.

By the time he and the two deputies got to the man, the man was holding the flotation ring around his chin to keep his head above water — and he was still pinned to his car. Other emergency responders in a second boat were able to provide a crowbar.

As Donar tells it, one deputy held the man up so he wasn't gulping water as the other deputy used the crowbar to free the man. He was guided quickly into the boat, then back to shore to medical personnel on site.

"This rescue would not have been possible without every person working together — and there were multiple emergency responders," Donar said, noting the sheriff's deputies, Madison Fire Department and officials from Pine Bluff, Verona, Fitchburg and more.

"Everyone deserves credit," he added. "In the time we were out there, the water went up about another several inches. That man would have drowned without the teamwork of all the emergency responders who came to the scene."

For other stories in this Special Report, check out When lakes are at their limits and State properties feel nature's wrath.