The first tent caterpillar population boom (outbreak) on record is from the 1600s. Since then, outbreaks have happened on and off; outbreaks in Langlade County from 1986 to 1991 and in several other northern Wisconsin counties in 1999 to 2001 left hundreds of thousands of forested acres defoliated before the populations collapsed.

Forest tent caterpillars have not had a major outbreak since the early 2000s. The maps below show areas of defoliation in the most recent outbreak years:

Forest tent caterpillars are about 2 inches long with colorful bodies covered by many hairs. The sides of their bodies are blue with narrow orange stripes. Their backs are black with white markings that resemble keyholes, penguins, or footprints. Newly-hatched caterpillars are all black and only about one-eighth of an inch long.

The forest tent caterpillar has one generation per year. It goes through four stages to complete its life cycle.

Forest tent caterpillar eggs are laid in a mass wrapped around the twigs of trees and shrubs. Occasionally, egg masses are found around cables and ropes. New egg masses are one-quarter to three-quarter inches long and covered with glossy, dark brown, glue-like material that protects the eggs during winter. They blend in with the tree and look like a swollen spot on a twig from a distance.

Each egg mass has up to several hundred eggs inside. Egg masses are laid in late June to mid-July and stay through the winter until warm temperatures cause them to hatch in the following spring. You might find some old egg masses from last year; they are lighter in color with small holes where the caterpillars hatched and left. 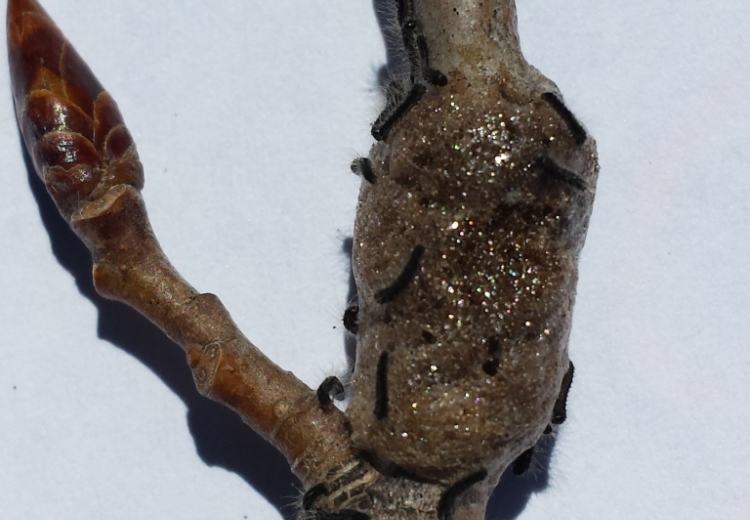 In northern Wisconsin, the caterpillars hatch from egg masses by late April to mid-May. Once they hatch, caterpillars eat leaves for five to six weeks. Feeding peaks in early June and is done by mid to late June.

After they completely defoliate (eat all the leaves off) the tree where they hatched, hungry caterpillars start to travel in search of more food. Outdoor items and buildings can be covered with migrating caterpillars, causing a nuisance to humans. 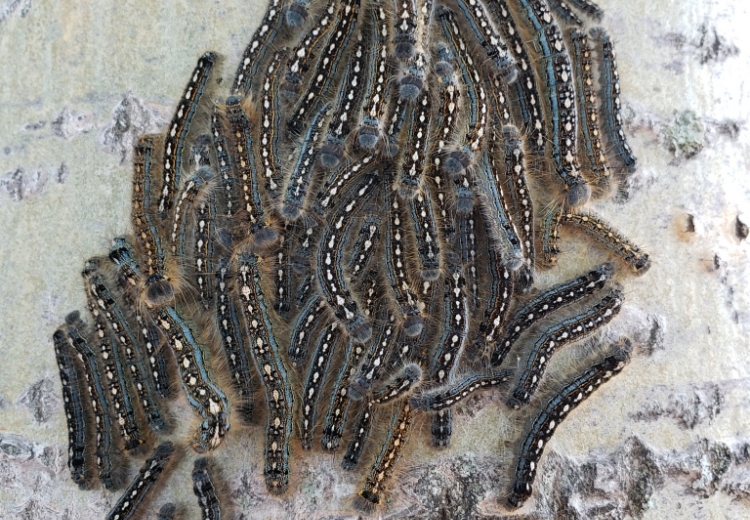 Full-grown caterpillars spin silken cocoons and pupate (transform) inside. Cocoons are made in rolled leaves, bark crevices or any protected place such as on the eaves and windowsills of houses. 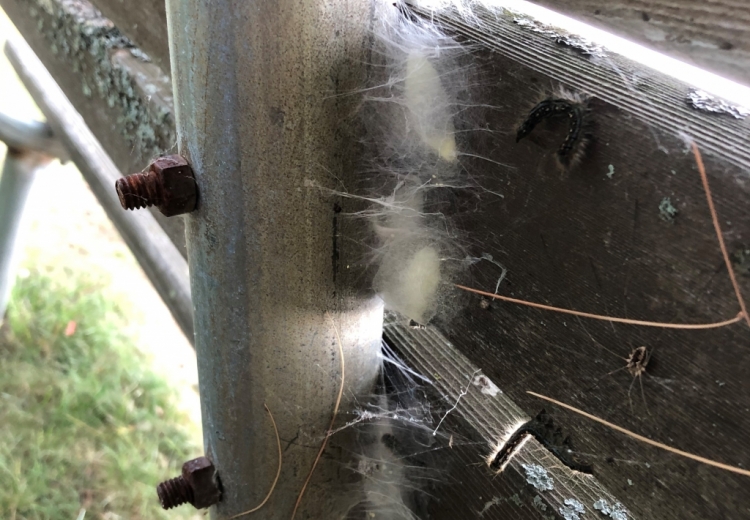 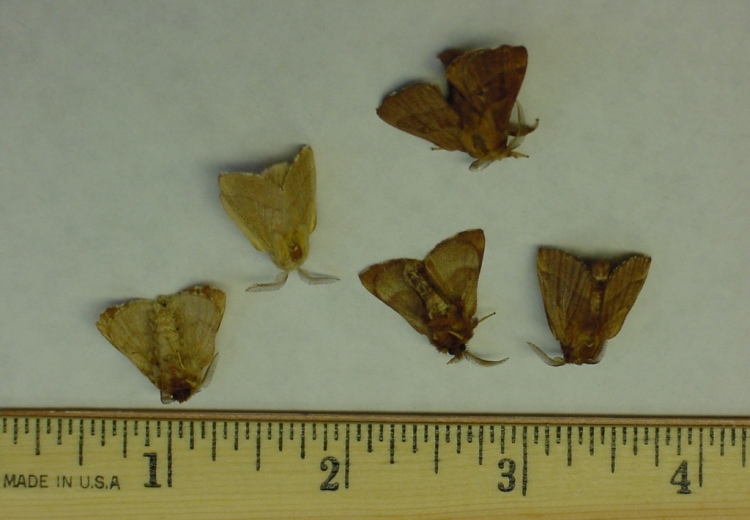 The adult is a light-brown moth with two dark brown lines on its wings. It is about the size of a quarter to half-dollar coin. About 10-14 days after they pupate, adult moths come out of the cocoon. In northern Wisconsin, the moths of forest tent caterpillars are seen from late June to mid-July.

The moths are attracted to lights at night. Because of this, during population outbreaks many moths are found flying in well-lit places such as gas stations and parking lots where lights are kept on at night. The adult moths mate, lay eggs and die within a week of coming out of their cocoon.

Forest tent caterpillars eat the leaves of many broad-leaved trees and shrubs. Their favorite foods in northern Wisconsin are aspen (poplar), oak and birch in forests, and marshal seedless ash and flowering crab in town. They won’t feed on red maple or conifers. All the defoliation is caused by caterpillars; the adult moths do not eat leaves.

After years of very low populations, forest conditions and weather can become just right to trigger a rapid increase in tent caterpillar survival and an outbreak occurs. Once an outbreak begins, it usually continues for two to five years before the population collapses. In general, forest tent caterpillar outbreak cycles begin every six to 16 years in northern Wisconsin.

Once tent caterpillar populations rise high enough, they often eat all available tree leaves before they are fully-grown. Starvation is a main cause of the end of an outbreak. Also, hungry caterpillars that travel in search of food are more visible to their natural enemies.

High populations easily get parasitoids and disease. For example, a parasitic fly (Sarcophaga aldrichi), called "friendly fly" [PDF] because it often lands on humans without biting, is a great help in lowering the populations of forest tent caterpillars. The adult fly lays an egg in the cocoon of the caterpillar. A maggot hatches from the egg, eats the inside of the cocoon and the parasitized pupae dies before becoming a moth. During the final years of an outbreak, the friendly fly can kill more than 95 percent of pupae. Adult flies become numerous during the later stage of the forest tent caterpillar outbreaks. The fly looks similar but is slightly larger than a house fly and does not bite. The friendly fly is one of the main causes of the collapse of caterpillar outbreaks.

Forest tent caterpillars can also get infections by viruses, bacteria and fungi.

Forest tent caterpillar populations regularly boom and bust. When their numbers are high (an outbreak) they can eat nearly all of the leaves (cause heavy defoliation) on broad-leaved trees and shrubs. During an outbreak, caterpillars may crawl on roads and buildings as well as trees.

Although caterpillars can eat all of the leaves off of a tree, most deciduous trees can survive two to four years of heavy defoliation by forest tent caterpillars. Heavily defoliated trees often grow a second set of leaves to make up for the leaves they lost to feeding.

Trees in poor health or under drought stress may die after several rounds of severe defoliation. Also the stress caused by defoliation in otherwise healthy trees may attract secondary pests. For example, oak trees that have severe defoliation by forest tent caterpillars are often later killed by two-lined chestnut borers [exit DNR] or by root rot fungi called Armillaria. When trees die, they provide more space, light and nutrients for under-story species.

Forests continue to grow. Outbreaks by the forest tent caterpillar are a natural, periodic occurrence in the forest. Although repeated defoliation may kill some trees, the survival of the forest is not threatened by this insect.

Healthy trees recover from caterpillar defoliation better than stressed trees. Reducing other stresses can help avoid attacks by secondary insects and fungi that may actually kill the trees. Maintain the health of shade trees by properly watering and fertilizing. Avoid disturbing or compacting the soil around the trees as much as possible.

Forest tent caterpillar egg masses are laid in summer on twigs of the trees and shrubs and stay all winter. Each egg mass has up to several hundred caterpillars, so you can quickly reduce the number of caterpillars that may hatch the following spring by removing egg masses before they hatch. This works especially well to protect smaller trees and shrubs.

Use a sticky band

You can put a sticky or slippery band around tree trunks to prevent caterpillars from crawling up to the leaves. Sticky bands can be purchased at garden centers or can be made at home using duct tape and a waterproof sticky material such as Tanglefoot or petroleum jelly. Wrap the duct tape tightly around the trunk, at least a few inches wide, at chest height. Then paint the sticky material onto the duct tape. Make sure that the sticky material does not directly contact the bark of the tree because it could harm or kill the tree.

A sticky band will only protect trees from caterpillars moving up and down the trunk. It will not work for caterpillars that hatch from egg masses already high in the tree. The sticky material may need to be replaced often because it gets less sticky when covered by debris or dead caterpillars. Take bands down around mid-June when most forest tent caterpillars are done feeding.

Moths of forest tent caterpillars are attracted to lights. When moths are abundant, turn off exterior lights. This may reduce the number of egg masses laid on nearby trees.

Spraying or soaking with soapy water

A stiff spray of water may work on smaller trees to kill young caterpillars. To remove caterpillars from your picnic table or house, you can kill individual caterpillars by pouring or spraying soapy water on them or simply by putting them in soapy water. Soapy water must completely soak caterpillars to kill them because their hair can protect them against small amounts of water. There are no traps available to put in your yard to attract forest tent caterpillars or moths.

Insecticidal soap can work well but must be sprayed on caterpillars, not just on leaves.

In a yard, a bacterial insecticide, Btk (Bacillus thuringiensis var. kurstaki) or general use insecticide such as Malathion or Orthene can be sprayed on trees to kill the caterpillars. Btk is made specifically for caterpillars, while other chemical insecticides may also kill insects we want around such as honeybees and natural predators of forest tent caterpillars. Btk breaks down in sunlight in a week (if not washed by rain sooner). You may need to spray again a week later if the number of caterpillars is still high. Insecticidal soap, Btk and general use insecticides are available at many hardware stores, garden centers and nurseries. Be sure to read and follow the label instructions carefully.

To remove caterpillars from your picnic table or house, individual caterpillars can be killed by pouring or spraying soapy water on them or simply by placing them in soapy water. Soapy water must soak caterpillars to kill them as their hair can repel small amounts of water. There are no traps available to attract forest tent caterpillars or adult moths that can be installed in your yard.

Is it a Spongy Moth? [exit DNR]
Organizing an Aerial Spray for Forest Pests [PDF]