Learn here how to identify Asian longhorned beetle, where it is and how to help keep it from moving to new places. This pest is a serious threat to Wisconsin forests because it can attack many different tree species, even when the trees are healthy. Many types of trees affected by this beetle also line miles of neighborhood streets in urban areas.

A pest of maples and other hardwoods, Asian longhorned beetle (ALB) is native to China and the Koreas. ALB populations have not been found in Wisconsin. Infestations have been found in six states (Illinois, Massachusetts, New Jersey, New York, Ohio and South Carolina), Ontario (Canada), and several countries in Europe. Some of these infestations have been successfully eradicated (eliminated) by cutting and destroying thousands of suitable host trees, and eradication efforts continue at other infestations. A map of U.S. infestations and eradications can be seen here [PDF exit DNR].

Asian longhorned beetle is believed to have entered North America from Asia stowed away in wood packing materials. The insect was likely accidentally introduced several times before regulations were put in place requiring treatment of wood packing materials to eliminate hitchhiking insects and fungi.

Asian longhorned beetles (Anoplophora glabripennis) belong to a family of beetles that have exceptionally long antennae. The adults are shiny black with white spots, about 1 to 1.5 inches long, with black and white horizontal stripes on their antennae. Several native beetles found in Wisconsin have a similar appearance. If you believe you have found an Asian longhorned beetle, email good quality pictures (preferably several views) to Invasive.Species@wi.gov. Include your contact information and indicate where and when the insect was found, and what it was doing when found.

Adult beetles emerge from infested trees during the summer and are present from July through September. They may remain on the tree they developed in or they may fly short distances to infest new trees. Their eggs are laid on the tree, hatch and the larvae tunnel beneath the bark to feed just under the bark. Older larvae will burrow deeper into the wood. The following summer, adults will emerge by chewing a half-inch diameter exit hole through the bark.

If Asian longhorned beetles become established in North America, there will be serious environmental and economic impacts, especially to maple forests and industries that use maple products.

Asian longhorned beetles pose a major threat to North American forests and urban areas because they can attack trees of all species regardless of individual tree health. Larval tunneling damages branches, and sufficient damage can cause tree mortality. 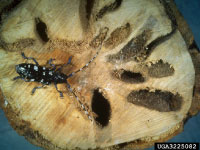 Emerging adult beetles chew round exit holes through bark that are about a half-inch in diameter; look for small piles of sawdust on the ground. 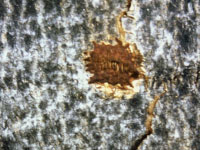 Leaves and branches at the top of the tree may progressively die. Look for the presence of darkened pits in the tree bark where female beetles have gnawed out shallow places where they deposit eggs. These pits will likely be filled with oozing tree sap.

Asian longhorned beetle adults are present only from July through September. They are about 1 to 1.5 inches long; their bodies are shiny black with white spots; and their antennae are marked with black and white horizontal stripes. If you believe you have found an Asian longhorned beetle adult, email high-quality pictures (preferably several) to Invasive.Species@wi.gov. Include your contact information and indicate where and when the insect was found, and what it was doing when found. 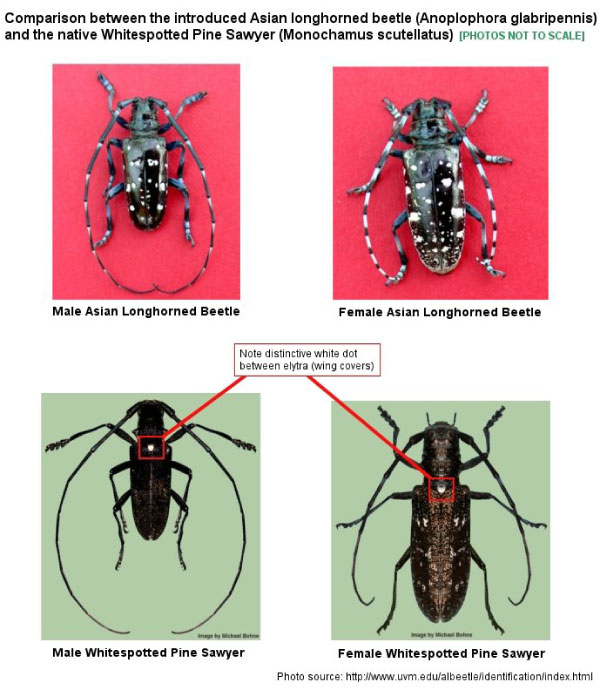 Asian longhorned beetle can easily hide in firewood so do not move firewood long distances.

Laws to prevent the spread of Asian longhorned beetle

The best way to manage Asian longhorned beetle is to eliminate it from North America. Regulations now require that wood packing materials be free of bark and treated to kill any insects in the wood. Cargo and shipping materials can be inspected in their country of origin and upon arrival in North America so that the pest is not reintroduced. In addition, quarantines are in place in the infested areas to stop the movement of potentially infested material into uninfested areas such as Wisconsin.

Since the discovery of Asian longhorned beetle in 1996, more than $100 million has been spent to try to find this insect and get rid of it in North America. Finding and controlling the pest is labor intensive, as trees must be carefully examined for signs of infestation. Because the insect remains hidden beneath the bark for most of its life, the only practical way to eliminate it is to cut down infested trees and chip or burn them. Nearby trees may also be infested but not yet showing symptoms, so these trees are usually removed and destroyed, too. Thousands of trees have been removed in an attempt to eradicate the insect wherever it has been found. Infested areas are also quarantined to prevent the movement of potentially infested wood, nursery stock, firewood or other items that could carry the insect.