The Western Prairie Habitat Restoration Area (WPHRA) was established in 1999 to permanently protect and restore 20,000 acres of grassland, wetlands and oak savannas. The project area encompasses 350,000 acres within 15 townships in St. Croix and Polk counties. The acreage goal of 20,000 acres is approximately 10 percent of the historic grassland acreage within the project.

The large, landscape scope of the project is based upon comprehensive research of biodiversity and ecosystem management practices. Restoration of viable grasslands and wetlands to provide habitat for waterfowl, pheasants and grassland birds is the primary objective of the WPHRA project. Additional objectives include the preservation of public open space and recreational opportunities as well as improved water quality. The intent is to widely scatter suitable habitat throughout the area in a checkerboard pattern, combining working farms with prairie, savanna and wetlands.

At the time of settlement by European immigrants in the mid-1800s, significant portions of western Wisconsin were covered by expanses of open grassland. The land was called "prairie" by early French settlers who could think of no other way to describe it than the word they used for "meadow". This area of Polk and St. Croix counties once had nearly 200,000 acres of tall grass prairie and oak savanna that were dotted with rich wetlands. Wildlife was abundant. In fact, many of the first visitors to the area reported great numbers of bison, elk and wild fowl.

In addition to the large expanse of native grasslands, nearly 140,000 acres were covered by oak brush, oak forest and aspen. Since all of these vegetative communities depend on periodic disturbance, it is likely that wildfires were a frequent occurrence on the landscape. It is also likely that the actual prairie and savanna acreage fluctuated over time depending on the distribution, frequency and intensity of wildfires.

The project area includes prairie remnants from one of the largest prairies found in the state along with a mix of grasslands, potholes and marshes that are extremely conducive to pheasant and waterfowl production. Natural woodlands within the area are comprised primarily of oak/hickory, southern mesic hardwood and aspen. Some of these forests are likely former oak savanna or prairie that were allowed to fill in with trees once fire was no longer a frequent occurrence. Reductions in habitat quality and quantity because of land use changes have contributed to the decline of grassland nesting wildlife populations. In addition, wetland loss or degradation has been an important factor in the decline of many wetland wildlife species. Ten species of birds known to occur in this area are state-listed as endangered or threatened and 19 species are listed as special concern. The area also includes 54 rare plant species, 18 of which are state-listed endangered or threatened.

The Western Prairie is a Land Legacy Place [PDF]. 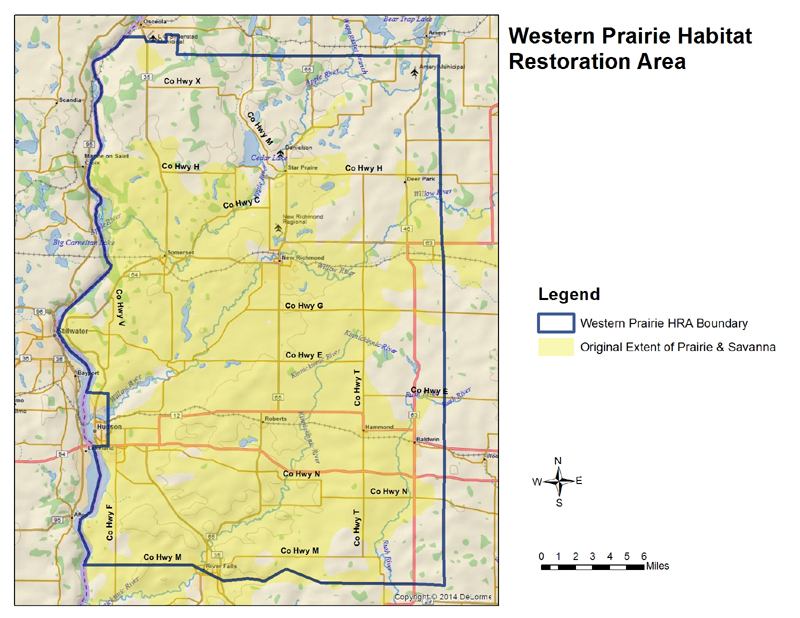 If you are interested in exploring this property further or want to print other aerial photos or topographic maps, you can access an interactive map. Then go to the button in the upper left hand corner called Layers and explore from there.