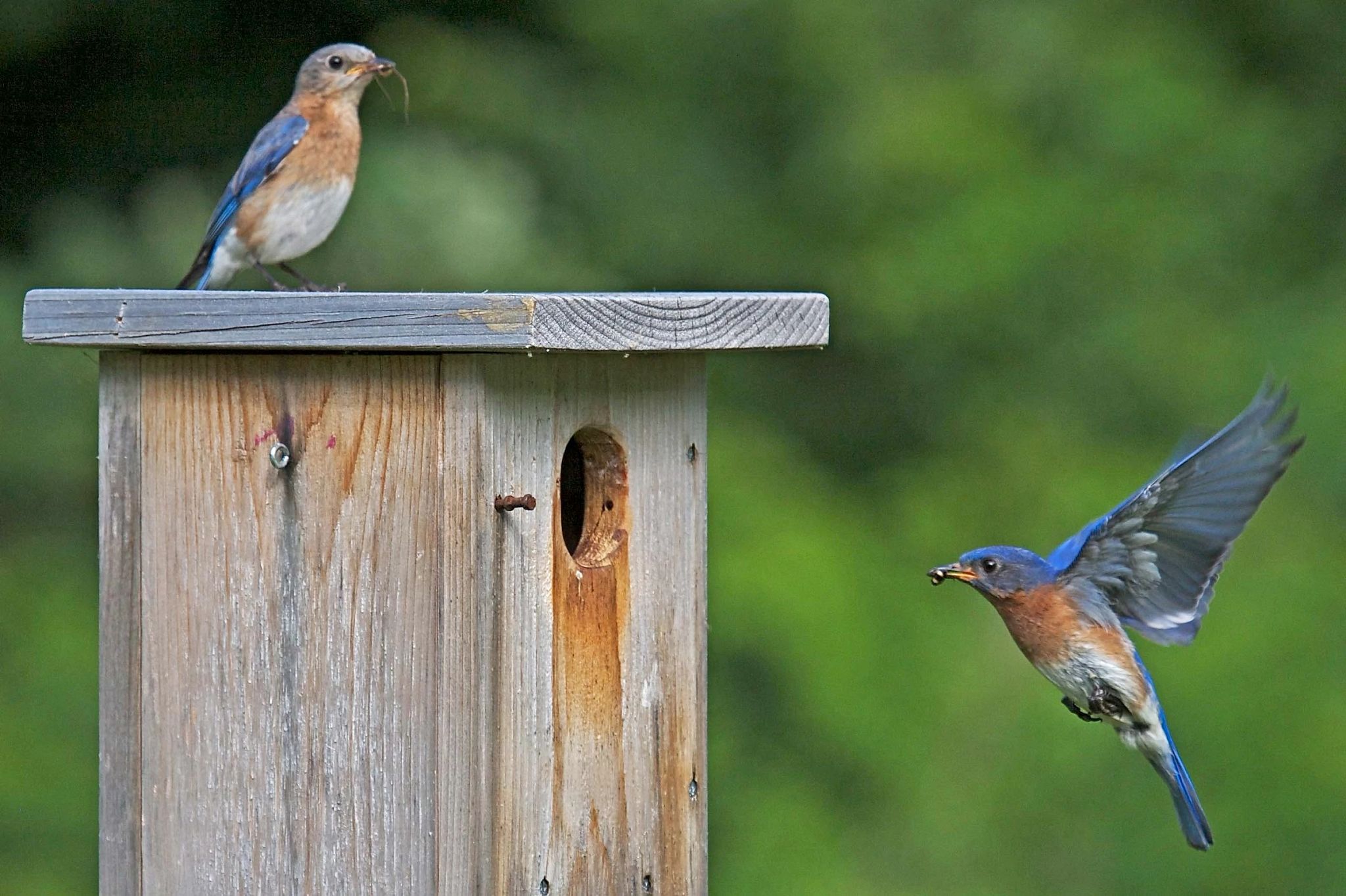 Nest boxes like this have been a key to bluebirds' recovery. Photo credit: Patrick Ready

MADISON, Wis. – The Wisconsin Department of Natural Resources (DNR) continues to celebrate Citizen Science Month by honoring the many volunteers across the state who help with scientific research and monitoring.

Early efforts by DNR staff and the continued work by the citizen scientists of the Bluebird Restoration Association of Wisconsin have helped restore and monitor populations of Eastern bluebirds. Thanks to this collaborative work, Eastern bluebirds’ flash of color and “cheer cheerful charmer” song are common signs of spring in Wisconsin.

“Bluebirds thrive in Wisconsin today thanks to the Bluebird Restoration Association of Wisconsin (BRAW) and their dedicated volunteers,” said Ryan Brady, DNR Conservation Biologist who leads the DNR’s bird team.

“Even as the species is now common and widespread, their work to erect and monitor nest boxes is essential to sustaining populations and detecting signs of change in the years ahead.”

Bluebird populations plummeted 90% by the 1980s, and only 600 nesting pairs were observed in Wisconsin. The DNR and a group of Wisconsinites officially established BRAW in 1986, with volunteers taking over operational control of BRAW that same year.

“Our members are citizen scientists in every aspect of the word. Not only do they build, site and maintain nest boxes, they also monitor and collect useful data about nesting success rates,” said BRAW President Steve Sample.

The group celebrates its 35th anniversary this year, with 750 members monitoring almost 7,000 nest boxes. BRAW members record about 20,000 bluebirds and another 14,000 cavity nesters annually, such as tree swallows, black-capped chickadees and house wrens, all fledging from their monitored nest boxes.

“[Volunteers] are monitoring so many nest boxes and trails annually that they can provide an early indicator if something trends in the wrong direction, like issues with nesting success or population size,” Brady said, adding that the data plays a significant role in bluebird conservation. “Detecting problems when birds are still common is invaluable and points to why groups like BRAW can be so critical.”

Over the last 35 years, BRAW members’ observations, combined with research sponsored by the Cornell Lab for Ornithology and the North American Bluebird Society, have improved the design and management of nest boxes.

“Wisconsin members have quickly adopted these advances and added some of their own,” said Sample. “For example, we now have a better understanding of where to locate nest boxes to meet bluebirds’ needs for insect-producing forage areas as well as safety for fledglings.”

Another important aspect of locating nest boxes is avoiding non-native species and reducing their impact on nesting success. Nest box entrance holes are now only 1.5 inches in diameter, which eliminates competition from European starlings.

To help get the word out about best practices, department staff, including Elizabeth Herzmann, a DNR Natural Resources Educator at the Horicon Marsh Education & Visitor Center, conduct workshops about nest boxes which are currently on hold due to the pandemic.

Bluebirds nest throughout Wisconsin but are most common in the southern two-thirds of the state. The bright bluebirds are favorites in part because they are tolerant of people and do not need wilderness.

“There aren’t many birds that like a monoculture of short grass – but bluebirds do,” Brady said. “They can buzz down and pluck an insect out of the grass.”

This makes bluebirds familiar sights at golf courses, public parks and even suburban neighborhoods, in addition to many other open habitats.

Although a few hardy Eastern bluebirds stay in Wisconsin year-round, most head to Southern states for the winter. Early returners show up in March and start scouting for suitable nesting cavities. Depending on the weather, by mid-April, egg-laying is in full swing.

From egg-laying through fledging of youngsters, the nesting cycle usually runs about 5 to 6 weeks. During this period, BRAW’s citizen scientists monitor the nest boxes on a 7 to 10-day interval. They record the use of nest boxes, the number of eggs laid and hatched and how many chicks of all species of cavity nesters successfully fledged. Bluebirds regularly raise two, and occasionally three, broods of young each year.

BRAW is seeking more volunteers to help monitor existing boxes or start a new bluebird trail. To volunteer, learn more about bluebirds or how to help them in your backyard and beyond, visit the BRAW webpage here.