40 years on the hunt

Memories of a first harvest, importance and inspiration — and learning the true gauge of success

IN THIS ISSUE: HUNTING COVERAGE 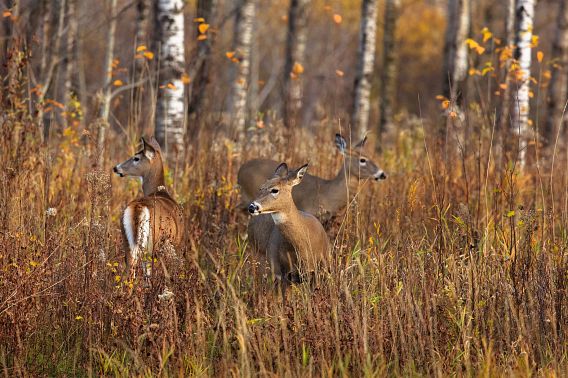 ©LINDA FRESHWATERS ARNDTHunting provides time for quiet contemplation and a chance to spend time together in the outdoors for the author and her husband.

I started hunting 40-some years ago because I wanted to share the experience with my husband, Bill, who had grown up hunting.

After we married and started our family, he would go deer hunting each fall with friends and tell me his hunting stories. Always a lover of nature and the outdoors, I grew more and more curious — and maybe a little jealous — about the experiences he related.

One year, he asked if I wanted to go along and sit with him on his stand, just to see if I liked it. Other than the cold — the one element I’ve never been able to embrace — I loved it.

The next year, Bill taught me how to shoot. We asked permission to hunt on land near our hometown, Wisconsin Dells, then scouted and set up some ground blinds and bought our licenses. We had permission to shoot a doe.

Always an early riser, this before-dawn thing was new to me. Opening morning that year was marked by a cold, steady rain.

We had decided I would sit next to him, at least the first day, so he could tell me what to do. These days, it’s called “mentoring,” something he does with great pleasure.

Mid-morning, as I was scanning the woods to my left, Bill whispered, “Deer. Straight ahead.”

I slowly turned my head and saw three or four does walking single file toward us. I was transfixed and didn’t move.

Bill “suggested” that I drop slowly to one knee and rest my elbow for a steady shot. I did, and the deer stopped in their tracks but didn’t run.

“Aim just below the neck of the deer in front,” Bill whispered, “and whenever you’re ready, squeeze the trigger.”

Before I could even question whether I was ready to shoot my first deer, she was lying on the ground 20 yards in front of us. My shot had hit its mark and she had dropped where she stood.

As we stood over the doe, I remember thinking how beautiful she was and how much we would appreciate having venison in the freezer that winter.

The following season, my addition to the hunting team took on new importance. We hunted that year with an old friend who, like Bill, is a bit color blind.

There was no snow that season to provide a blank canvas for blood droplets to show in contrast to the white. When Bill shot a deer and called for help, I watched as the two of them desperately searched the oak leaves for signs, unable as they were to see the red spots.

I glanced down, put my finger next to a small blood droplet and said, “You mean like this?”

My credentials as an expert tracker were immediately confirmed, and I joked for years that this was the real reason they always asked me to come along.

Over the years, friends and acquaintances have asked me why I hunt, and it’s often hard to find words to explain.

Hunting is a very personal experience. What I love is sitting on my stand as the sun rises and the world comes alive before me. The landscape changes with each minute, as shadows change shape, frost vanishes and birds awaken.

I love being alone with my thoughts. Over the years, I’ve solved family differences, rehearsed conversations with co-workers and friends, wondered about the mysteries of nature, written and rewritten stories about those wonders to share with others in this magazine.

I love hearing and seeing wildlife and the anticipation that at any second, something could appear around a nearby tree. Besides deer, I’ve been blessed to see a fox, a coyote, turkeys, cranes, eagles, squirrels, chipmunks and birds of all kinds.

Most importantly, I love spending time afield with my best hunting buddy, scouting public land for “good spots,” planning and scheming strategies for the next two-person drive.

After so many years, the schemes are less complicated as arthritic knees and hips have entered the equation. But they always have the same successful outcome — even if it’s just in our minds.

Kathryn A. Kahler is associate editor of  Wisconsin Natural Resources magazine and has worked at the DNR for just about as long as she’s been hunting. She and her friend Sheila Lychwick were the first two women to earn undergraduate degrees from UW-Madison’s Department of Wildlife Ecology in 1972.