Once widespread here and across North America, elk were eliminated from Wisconsin in the 1880s due to unregulated hunting and habitat loss. Over 130 years later, they once again live in the central and northern forest regions of our state. From a population of 25 elk reintroduced in 1995, and with the help of the second reintroduction efforts that started in 2015, the state’s total elk population has now surpassed 400 animals.

Thanks to the support of multiple partners and the backing of Wisconsin citizens, the bugle of rutting September bulls is back and here to stay!

The Black River elk herd was estimated to contain approximately 115 animals as of July 2021. With approximately 25 calves expected to have been born this spring, the herd is Growing rapidly and settling in well to their new home. Vehicle collisions have been the leading cause of mortality in the Black River herd, and no elk have been killed by predation since January of 2017. After the initial few years post reintroduction, the population is beginning to climb and the Black River herd is now and established wild herd in central Wisconsin.

An important message about elk viewing in Jackson County

To ensure the successful reintroduction of elk into Jackson County, please respect the elk and their habitat. Disturbances to the elk, such as calling them or attempting to view them by foot, may force the elk into areas in which they may not otherwise reside and can make them more susceptible to predation, vehicle collisions, or other undesirable circumstances.

While it is understandable that people will have the desire to observe the elk, in the interest of the animals’ health the public is asked to refrain from pressuring or calling to the elk during the rutting season. This type of disturbance can disrupt breeding activities and separate the elk from their family units, leading to slower population growth.

Elk are found in two distinct ranges in Wisconsin. The largest, and oldest, elk herd in the state is the Clam Lake elk herd. The Clam Lake herd ranges across Ashland, Bayfield, Price, Sawyer and Rusk counties in northern Wisconsin. The other, the Black River elk herd, is found in the forested region of Jackson County in the central part of the state. Reports on each herd can be found below.

Current management practices are aimed at securing the future of elk in Wisconsin. Ongoing research is being utilized to gain additional knowledge regarding survival and recruitment rates, habitat use and movement patterns. The first state-managed hunt for elk in Wisconsin was held in 2018 in the Clam Lake Elk Range only. Visit the Elk Hunting page for more information.

The Clam Lake elk herd was estimated to be approximately 330 individuals as of July 2021 With the addition of new animals through natural reproduction within the herd and the translocation of elk from Kentucky in the spring of 2017 and 2019, the herd has grown to a level that can sustain an annual bull-only hunting season and now occupies much of the Clam Lake Elk Range. This population has grown slowly, but steadily since reintroduction in 1995. Wisconsin will again hold a very limited hunt in the Clam Lake Elk Range this fall, the State's fourth modern-day elk season. The first three seasons have been an outstanding success, with 14 bulls harvested by 15 hunters.

Although they currently occupy approximately 90 square miles of the designated elk range, the herd has grown at an average rate of 13% annually. However, growth rates have varied from as high as 30% to as low as -16% since 1995. Primary causes of mortality include predation by wolves and black bears and vehicle collisions. Primary habitat used by the elk consists of aspen and pine forests interspersed with forest openings, lowland conifers and water bodies.

Based on the habitat suitability model derived from a study by Didier and Porter, the Wisconsin Elk Study Committee (WESCO) determined that the United States Forest Service (USFS) Great Divide District (GDD) of the Chequamegon National Forest (CNF) near Clam Lake was most suited for an elk reintroduction.

The Clam Lake elk range was recently expanded by 506 square miles so the CNF-GDD currently consists of 1,221 sq miles (781,440 acres) in portions of Ashland, Bayfield, Price, Rusk and Sawyer counties in north-central Wisconsin. State Highway 77 and county highways GG and M converge near the center of the GDD at the community of Clam Lake. The GDD is mostly under National Forest ownership (81% or 370,656 acres). The remaining 19% (86,944 acres) is privately owned, with relatively little in agricultural production.

Chronic wasting disease (CWD) is a degenerative disease of the brain and nervous system tissue that infects members of the cervid family (deer, elk, etc.). CWD is present in white-tailed deer in Wisconsin but has not yet been detected in an elk in Wisconsin. All hunter-harvested elk, and all elk that die of other causes that a viable sample can be taken from, are tested for CWD.

In evaluating and establishing a testing protocol for disease testing and the overall health of elk moved from Kentucky to Wisconsin, the DNR worked with our sister state agency, the Department of Agriculture, Trade, and Consumer Protection (DATCP), and the United States Department of Agriculture, Cervid Health program (USDA) to establish the necessary transport and importation testing that was required by these agencies.

We also considered additional diseases that may be of concern to both wildlife and domestic animals within the state. The outcome was a testing protocol that required the elk being translocated be held in quarantine for a minimum of 120 days while multiple rounds of whole herd testing occurred. Each year, the testing protocol was evaluated by these agencies, including the results of previous years’ tests and any necropsies (the animal equivalent to an autopsy) of translocated elk.

Mandatory testing included tests for bovine tuberculosis and Brucella abortus, as well as an extensive risk assessment that evaluated the possibility of chronic wasting disease in the region of Kentucky where elk were being translocated from. In addition, the DNR tested for diseases that primarily affect wildlife or, in some cases, primarily affect domestic animals and can spill over into wildlife, including bovine viral diarrhea virus, bluetongue, epizootic hemorrhagic disease as well as a complete blood count with an evaluation of both the red and white blood cells.

Prior to translocation, the elk were also treated with anthelmintics to reduce external and internal parasite loads as much as biologically possible.

The Elk Advisory Committee reviews and makes recommendations on the reintroduction and management of wild elk. The committee advises the Wildlife Policy Team on a variety of topics such as herd monitoring and growth strategies, research priorities, herd health issues and other reintroduction strategies. The committee will provide input on other elk herd management and policy decisions as requested.

Department staff members are tending to numerous projects to ensure the success and sustainability of our Wisconsin elk herds. Some recent and ongoing projects include: 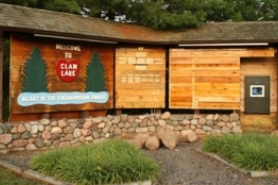 An interactive touch screen kiosk has been retrofitted into an existing signboard located at the junction of state highways 77 and GG in Clam Lake. The kiosk is designed to provide visitors to the area with expansive information about the resident elk herd and their habitat.

The program provides information about the history of elk in Wisconsin and even has a video clip of the original elk reintroduction. Most importantly, the program contains other tools and information to help visitors experience elk including wildlife spotting guides, maps and directions to nearby viewing areas.

Please note that the interactive kiosk may not be available during winter months.