Investigating the relationships between deer, predators and disease

Fall 2016 marked the beginning of the largest and most comprehensive deer research project ever undertaken in Wisconsin: The Southwest Wisconsin CWD, Deer and Predator Study. This initiative stems from Governor Scott Walker’s commitment to reevaluating chronic wasting disease in Wisconsin. The goal of this project is to comprehensively examine factors that could impact deer survival and deer population growth in southern Wisconsin. Those include Chronic Wasting Disease, predation, habitat suitability and hunter harvest. Simultaneous studies will take place in areas with differing rates of CWD infection, which will help the agency better understand how CWD may or may not be interacting with other factors that ultimately impact the deer herd. Uniquely, this study will directly estimate the abundance and distribution of deer predators (bobcats and coyotes) within the study areas, and will examine their impact on deer survival and behavior.

Want to get notified when new newsletters come out? Sign up for the following topics on GovDelivery.

The overall objective of this research is to gain a comprehensive understanding of deer population dynamics in the CWD-endemic region of southwestern Wisconsin. This study incorporates lessons learned from the recently-completed deer mortality study.

The specific objectives of this study within the CWD-endemic area are to: 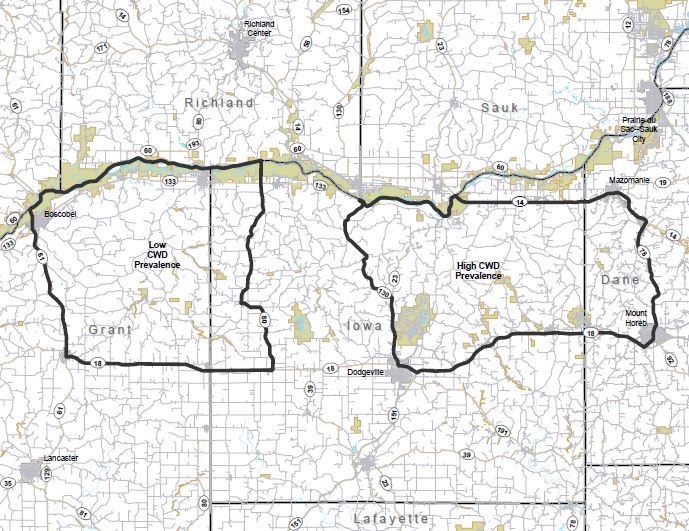 How we capture deer for monitoring

To catch deer for this project, researchers use the following methods: 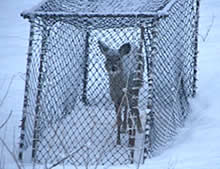 Netted cage traps are a metal framed trap wrapped in netting with a single door that the deer walks through to get to the bait in the back of the trap. When the deer gets to the bait it bumps the trigger wire strung about 6" off the ground inside the trap and the netted door closes behind the deer. 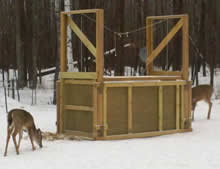 Box traps are wooden traps with two doors (bait side is blocked by hog wire) that the deer can only enter from one side. When the deer walks to the bait in the back of the trap, it bumps the trigger wire strung about 6” off the ground inside the trap and the two doors drop to trap the deer. 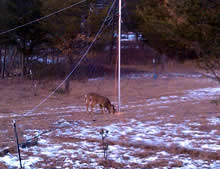 The drop nets we use are large nets suspended several feet off the ground that have a central trigger point that holds up the net. When deer come to the bait located in the center of the suspended net, the net operator triggers the net and it drops on top of the deer below it.

Darting involves using a dart projector that shoots a transmitter dart at a relatively low velocity to administer anesthesia to the deer. The dart stays attached to the deer to transmit the deer's location to the capture team using a VHF frequency so the deer can be GPS collared. Using this technique, deer are usually captured within 15 yards or less of the person firing the dart.

How we capture and monitor bobcats and coyotes

Collaboration with the Public

Researchers will use live traps, such as cage traps, as necessary to capture bobcats and coyotes. Scent lures and visual attractants are placed at the back of the cage, and when the animal enters, it steps on a treadle that closes the door behind it.

Once we capture the animal, we will use one or two tracking devices to follow and monitor the animal.

The five monitoring devices we use are:

We will use vaginal implant transmitters (VIT) to help us locate fawns born to does we have collared. The transmitter is implanted in the doe during the winter months and in the spring (May and June) when the doe gives birth, the transmitter will send a signal letting us know the doe has possibly given birth. Researchers can then locate the transmitter and find the fawn to collar. This allows us to track both the doe and fawn to examine potential effects of predation and disease on doe-fawn pairs.

Does we capture will be collared by researchers using standard GPS collars that don't expand. Researchers will allow for growth of the doe by adding an inch or two of space when placing the collars on the does. The GPS collars will send locations twice a day depending on environmental conditions (weather, tree canopy density and topography) and let researchers know if the collared deer has possibly died. (Researchers will receive a text message when the collar doesn't move for more than 4-6 hours.)

Fawns we capture will be collared using expandable drop away VHF collars that have pleats sewn into the collar that will pop and expand as the fawn grows. The elastic in the collar is designed to have the collar fall off within approximately 18 months of capture. Researchers will use telemetry equipment to check on the fawns once per day to determine if the collared fawn has possibly died (the signal will change its pulse rate when the collar hasn't moved for more than 6-8 hours)

Adult bucks will be collared using expandable GPS collars that can stretch during the rut and also have pleats that pop to allow the collar to expand as the collared bucks grow. The GPS collars will send locations at least twice a day depending on environmental conditions (weather, tree canopy density and if the deer is in a valley or on a hill) and let researchers know if the collared deer has possibly died (Researchers will receive a text when the collar doesn't move for more that 4-6 hours)

Collaring and monitoring bobcats and coyotes

Bobcats and coyotes will be collared with GPS collars that record and transmit the location of the animal multiple times per day. The collars weigh five percent of the animal's weight or less, and researchers give an extra inch or so of space when fitting the collar on the animal to allow for growth. The collars will send six to eight locations a day, and alerts are sent when the collar is stationary for longer than six hours to let researchers know the collared animal has possibly died.

There are numerous ways volunteers are directly and indirectly involved in this project: