About the SW CWD Study

The Southwest Wisconsin CWD, Deer and Predator (SW CWD) Study is the largest deer and chronic wasting disease (CWD) study the DNR has ever undertaken. The purpose of this study is to understand the factors that impact deer and deer populations, and combine them into a single model. By including all the major forces that impact deer survival, researchers can get a more definitive view of how all these factors, but namely CWD, impacts Wisconsin's deer populations.

Studies in the western USA have found that CWD negatively impacts elk and mule deer survival and population size, but no field research has documented the impact of CWD on white-tailed deer survival or population growth in Wisconsin. Furthermore, there is not any ongoing work in the Midwest that specifically addresses the direct impact of CWD on deer survival. However, CWD continues to be a high priority among Wisconsin deer hunters, county deer advisory councils (CDACs) and wildlife managers. There is particular interest among these groups to understand the impact of CWD and how it interacts with other important factors of deer population size and health, such as predation and recruitment. 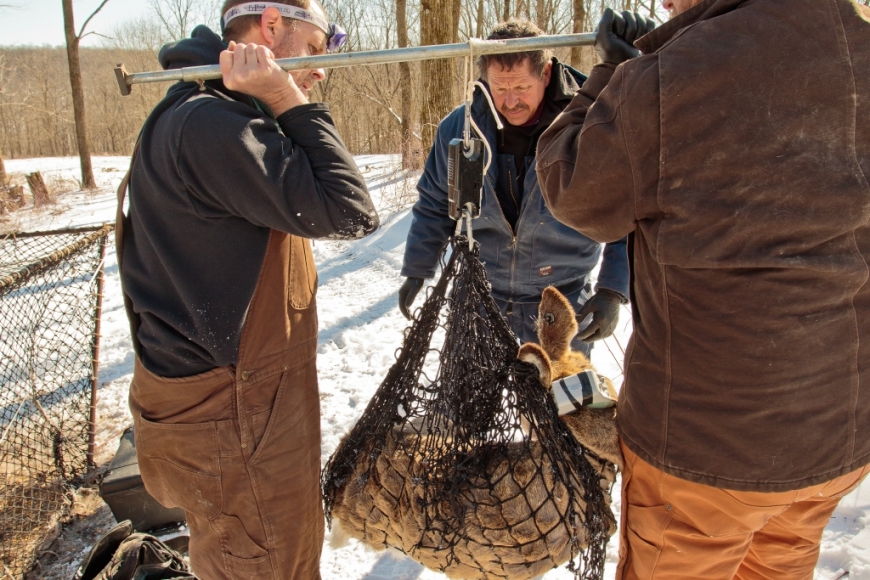 The first few years of the project (2017-2020) comprised the first phase of the project, where staff were capturing and collaring animals. This phase set up the project's data collection infrastructure. Over 1,400 animals were collared and released to live out their lives. The second and current phase of the project is focused on data analysis. Data is still pouring in from the radio collars of the individuals that are still alive, but parts of the model can be analyzed and incrementally assembled. All of these smaller analyses will fit together to form the main model of the project, the Integrated Population Model (IPM). Starting mid-2021, the research team will begin releasing their findings through scholarly publications and the project newsletter.

The overall objective of this research is to gain a comprehensive understanding of deer population dynamics in the CWD-endemic region of southwestern Wisconsin. This study incorporates lessons learned from the recently-completed deer mortality study.

The specific objectives of this study within the CWD-endemic area are to:

Ultimately, the project’s main objective is to combine what we learned from these specific objectives to produce a robust, Integrated Population Model (IPM) that combines data on survival, reproduction, recruitment, age-at-harvest and trail camera data. The IPM needs to be capable of estimating current deer population size, reconstructing historic dynamics of deer populations in the CWD-endemic area and simulating future deer populations under alternative harvest scenarios and under projected changes in CWD prevalence. Great care is going into the assembly and testing of the model. Additional analyses are planned that are not part of the IPM but instead are relevant to hunters, managers and conservationists. Check out the project timeline for an exhaustive list of products and when to expect them.

The research team released an updated timeline for the project with details about what products can be expected and roughly when they are expected to be complete. The timeline was also discussed in more detail in the project newsletter. The timeline will be updated as needed, so check back every couple months.

The fieldwork takes place in southwest Wisconsin, encompassing the area with some of the highest observed CWD prevalence in the state and the place where CWD was initially discovered in WI. 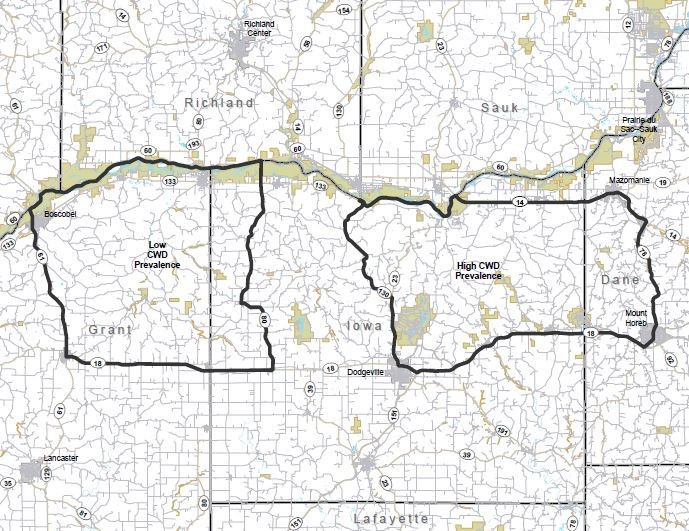