The Wisconsin DNR maintains the locations of all stands confirmed with HRD. If you suspect HRD in your stand, please contact forest health staff for confirmation and consultation.

Heterobasidion root disease (HRD), formerly known as annosum root rot, is considered one of the most destructive diseases of conifers in the northern parts of the world. HRD was first confirmed in Wisconsin in 1993. This disease can be caused by several species of fungi, but Heterobasidion irregulare (H. irregulare) is currently the only species found in Wisconsin. Prevention of HRD is key, as it is difficult to treat and control. Many tree species can be hosts, but it is most common in Wisconsin in red and white pine plantations.

Learn the biology and impact of Heterobasidion root disease (HRD), how to identify it, how to prevent its introduction and much more in the following video.

Since 1993, HRD has been confirmed in 30 Wisconsin counties (see map).

Many woody species have been reported as HRD hosts in the world. In Wisconsin, HRD is known to infect and kill red, white, and jack pines, white and Norway spruces, balsam fir and red cedar. Infection has been discovered on some hardwood species, but impacts appear to be minimal.

HRD infected trees have reduced height, shoot and diameter growth and thin foliage. Symptoms progress over several years and result in mortality. Symptoms typically appear 3-8 years after a thinning. The number of infection centers in a stand can vary widely. Infection centers create gaps in the forest canopy.

Site factors are characteristics of the specific area that influence how likely it is for a disease to occur there. Site factors include the type of soil, temperature, slope of the land and more.

In the southeastern United States, the disease is more common on former agriculture land with a soil pH of less than 6. Sandy or sandy loam soils at least 12 inches deep, with good internal drainage and a low seasonal water table are also considered good sites for disease development.

Infection by the HRD fungus (Heterobasidion irregulare; formerly H. annosum) most often occurs when spores, produced by the fruit body, land and germinate on the surface of a freshly cut stump. This infection process proves a strong relationship between HRD and thinned stands.  Spores are most often produced when the temperature is between 41⁰ - 90⁰ F. Though most spores are deposited within 300 feet, spores can be carried in the wind over many miles.

The HRD fungus colonizes the stump, moves into the root tissue and progresses from tree to tree via root contact at the rate of approximately 3.2- 6.5 ft/yr. Infection through root and lower stem wounds can also occur. The fungus degrades both the lignin and the cellulose and causes a stringy yellow decay in the roots and lower stem. 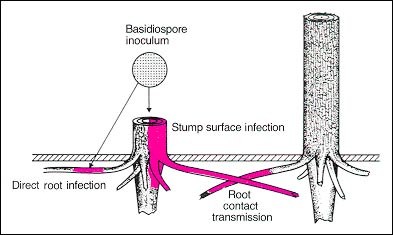 Fruit bodies, or conks, of HRD can be found at the base of fading and dead trees, as well as on stumps. These fruit bodies may be buried in the soil and duff layer. Fruit bodies are most commonly observed in the fall but can be found any time of the year. Young fruit bodies look like popcorn and under favorable environmental conditions, become bracket-shaped or shelf-like. Fruit bodies vary in color but are usually light to dark brown above and white to tan below.

Both HRD and red pine pocket mortality can occur in the same stand and even within the same pocket.

Once this disease is in a stand, it is very difficult to control. Prevention is the best approach.

If you are planning a thinning, consider treating freshly cut stumps of susceptible tree species with fungicides. Stumps should be treated as soon as possible after cutting and no later than one day after cutting.

Many factors, such as tree species, distance from HRD-infected stands, and time of year influence the risk of infection and impact by HRD. A risk-based fungicide treatment guide [PDF] is available for landowners and property managers in Wisconsin to determine whether fungicide treatment is warranted in a stand.

Currently there are two pesticides to prevent HRD registered with the Dept. of Agriculture, Trade and Consumer Protection in Wisconsin. Cellu-Treat® (disodium octaborate tetrahydrate) is a Borate-based chemical and Rotstop®C is a biological fungicide that contains spores of the naturally occurring wood decay fungus, Phlebiopsis gigantea. Both products can be mixed in water and applied using a backpack sprayer or an attachment to a harvester.

Learn where to purchase fungicides in our HRD fact sheet [PDF].

Management information is available in the HRD treatment guidelines [PDF]. For recommendations when HRD is in a stand, view Appendix A.