Dams do not last forever. Dam records indicated that approximately 900 dams that were built on rivers in the state have been removed. Economic, social, legal and environmental factors all play a significant role in the decision whether to maintain or remove dams.

Several major issues can lead to dams needing to be removed in Wisconsin.

Dams can provide many benefits to their owners and the general public including hydroelectric generation, recreational opportunities, fishing opportunities and water supply for industrial and agricultural purposes. However dams can also have a negative impact on the waterways they impound. In general, carp prefer the warm waters of an impoundment, yet when a dam is removed the cool water species such as trout and bass, generally preferred by anglers, can move back into the river and repopulate.

The most significant benefits of dam removal can include:

Records indicate that over 650 dams that were constructed in the 1800s to early 1900s were removed after they had outlived their useful purpose. In more recent years, Wisconsin has seen a large number of its historic dams aging and falling into disrepair. Other dams have been adversely impacted by flooding events. The owners of these dams are offered the option of repairing the dam to meet current standards or abandoning the permits for the dam and removing it from the waterway. If the dam owner is considering removal, or if it is not economically feasible for the dam owner to repair the dam (dam removal generally costs one-third of estimated reconstruction costs), a public information meeting is usually held in which the Wisconsin DNR explains the situation and gains public input prior to issuing the permit or approval for dam removal.

As dam removals have been accomplished over the last 50 years significant improvements have been noted in water quality, habitat and biodiversity at many of these sites. The department’s activities in these situations have included participating in public information meetings to explain the benefits of dam removal to the surrounding ecosystem and assisting in exploring funding opportunities to remove the dam. In the future these types of efforts will probably continue on a selective basis, driven by watershed plans that identify dams which are most detrimental to the ecosystem. These efforts cannot be accomplished without a willing owner or if there is a responsible party that is willing and able to take over ownership of the dam and properly repair, operate and maintain the structure.

Over 150 dams have been removed from Wisconsin streams since 1960. Removed dams have ranged in size from small dams on trout streams, such as the Cartwright Dam on Shell Creek, medium size dams such as the Ontario Dam on the Kickapoo River and fairly large dams on warmwater streams such as the North Avenue Dam on the Milwaukee River. 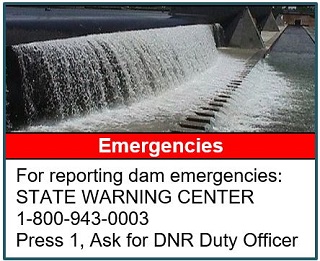