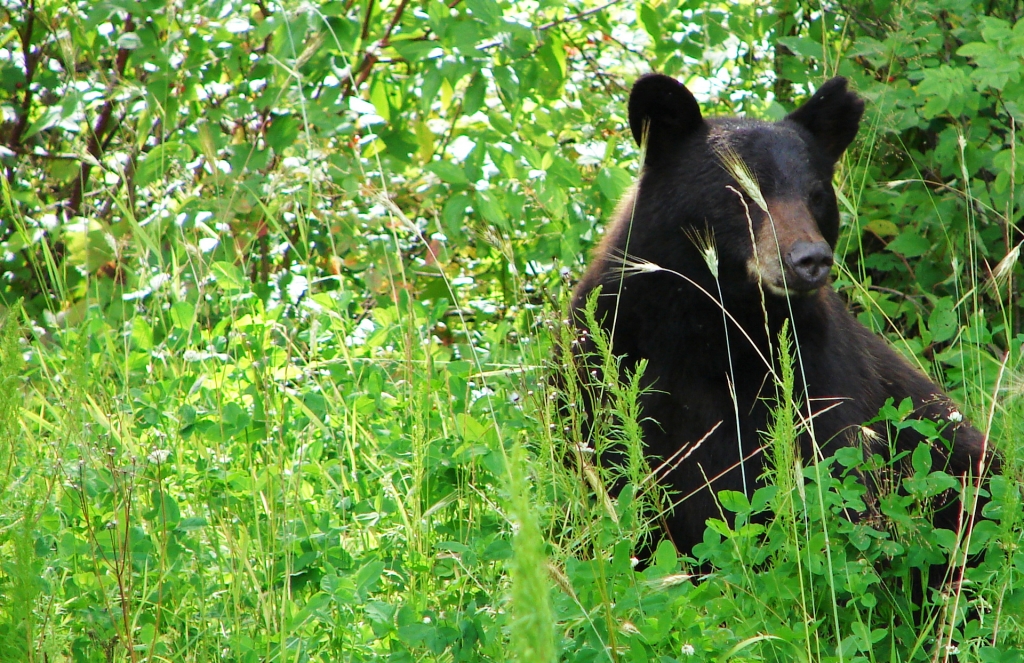 What To Do For Nuisance Or Injured Black Bears

Have issues with a black bear on your property or in your neighborhood? Call our partners at USDA Wildlife Services. They check voicemails daily and help Wisconsinites resolve bear issues across the state.

Wisconsin's bear population is managed primarily through hunting by offering hunters a quality experience while being managed under a strict quota/permit issuance system designed to ensure the long-term future of the population. More than 129,000 hunters applied for 11,530 permits in 2021, making the wait to receive a harvest permit approximately 1 to 12 years, depending on the bear management zone. However, when one finally receives a permit, the opportunity to harvest a bear is better than 40% for most zones and some of the biggest bears in the country are taken in Wisconsin. Several bears registered by hunters each year top 600 or 700 pounds!

The Wisconsin Black Bear Management Plan 2019 - 2029 [PDF] was developed by the DNR Bear Advisory Committee and approved by the Natural Resources Board in May 2019.

for a bear permit or purchase a preference point on Go Wild.

Wisconsin is home to a thriving black bear population estimated at more than 24,000 bears. The black bear's primary range is located in the far northern third of the state. Due to a growing population, bears are becoming much more common in the lower two-thirds of the state than ever before.

In 2019 wildlife biologists in Wisconsin began conducting a new research technique for estimating the bear population, which helps develop guidelines that will ensure a prosperous future for the species. This research was highly dependent on the hard work of not just department biologists, but also federal and tribal partners, who during spring and early summer, placed over 800 hair snares across the Wisconsin bear range. Each hair snare consisted of a liquid bait surrounded by a single strand of barbed wire. Biologists visited each site weekly to collect samples of bear hair from the barbed wire, and samples were then sent to a laboratory so that the DNA could be isolated and individual bears could be identified.

During the 2020 bear season, hunters were asked to submit two premolar teeth, rather than the single tooth required in previous years. DNA will be extracted from the second tooth to identify bears that had previously been "marked" at a hair snare. This "marked/recapture" study will help determine an estimate of just how many were living in the wilds of our state.

Although bears are an important part of the ecosystem, conflicts with humans are inevitable and additional measures to abate damages are sometimes necessary. The DNR collaborates with USDA-APHIS-Wildlife Services to investigate reported conflicts with bears and implement adaptive abatement measures.

Most bear issues are generally nuisance related and can occur at any time of the year when bears are active. However, agricultural damage can also be a problem when bears are preparing for winter denning and crops are at their most palatable stages.

There are numerous steps that anyone can make to prevent or stop nuisance bear issues.

The Wisconsin black bear general public survey was conducted in 2017 among Wisconsin residents regarding the general public's awareness of and attitudes toward black bears. A report has been produced, the General Public Survey Final Report, to summarize the results received.

The Wisconsin black bear applicant survey was conducted in 2017 among bear harvest permit applicants and it examines applicants' current satisfaction with and preferences for black bear hunting opportunities in the state. A report has been produced, the Black Bear Applicant Survey Final Report, to summarize the results received.