Past and potential ferrous (iron) mining projects in Wisconsin

Click on the tabs below for short descriptions of iron deposits in Wisconsin that are currently being explored for mining or were the sites of historical mines. 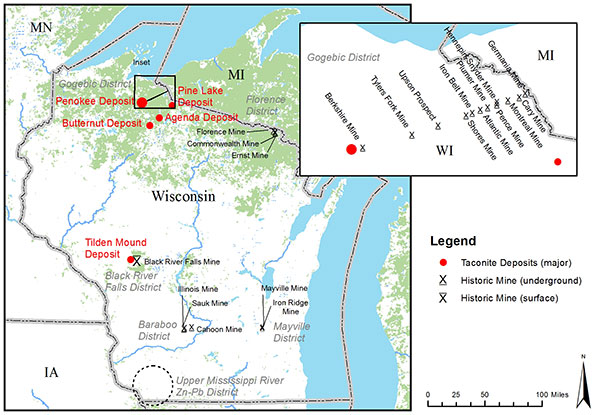 The Baraboo District was an active iron mining center in the early 1900s. There were three operational iron mines located in this area by around 1910, shipping naturally concentrated hematitic ore from underground mines. Operation in the Baraboo District ceased by around 1930 and the area no longer contains any known marketable deposits of iron ore.

The Jackson County Iron Company operated a surface taconite mine from 1968 to 1982. The site was about 1,300 acres, including the open-pit mine, associated processing facilities and disposal areas for encompassed mine tailings and waste rock.

Following the passage of state mining laws, the DNR issued a mining permit in 1981. Shortly after receiving their permit, the mine closed and began reclamation activities.

The company requested a Certificate of Completion (COC) in 1990. The DNR issued a partial COC covering most of the site. The company continued reclamation work for a decade. Persistent stability and revegetation concerns prevented the DNR from finding that the entire plant site had been fully reclaimed for many years, but the DNR issued the final COC in March 2011.

The Florence County District is another historic iron mining district in Wisconsin. By 1930, mining in the area had mostly ceased, with over 7 million tons of naturally concentrated hematitic ore having been shipped from the underground mines in the area. Aside from a couple of prospecting operations since, there has been no active or proposed mining activity in the Florence District in recent years, and none is anticipated in the future.

The Penokee/Gogebic deposit is generally defined as the 21-mile western end of the 60-mile-long Gogebic Iron Range, which stretches east to west from Lake Gogebic, Michigan, to Mineral Lake, Wisconsin. The deposit is steeply dipping (between 40 and 90 degrees north, averaging 65 degrees) and contains 20-30% iron in the form of magnetite.

Because the iron ore in this deposit is of lower grade than the natural hematitic ores previously mined in northern Wisconsin, the ore must be concentrated and processed into taconite pellets prior to shipping to a smelter.

The Gogebic Range was first mined in the late 1880s and supported at least a dozen underground mines in the Hurley area. Those early mining activities concentrated on extracting naturally high-grade hematitic ore until those bodies were largely exhausted by the 1960s. As there is still a large quantity of taconitic-grade iron ore available in the western Gogebic deposit, it is the primary site of contemporary iron mining speculation in Wisconsin.

Most of the surface and mineral rights for the land containing the deposit are currently owned by the LaPointe Iron Company, which has optioned potential development of the deposit to Gogebic Taconite, LLC.

The Mayville District was home to the first iron mining operations in Wisconsin. From 1849 through the late 1920s, open pit and underground mines in the area delivered high-quality direct ship iron ore to markets. There are no marketable resources left in the Mayville District.