Native Americans have lived in the area we now call Wisconsin for more than 12,000 years. Throughout this time, Native Americans engaged in a universal practice of humans – the respectful burial of their dead.

During the Woodland period (about 500 B.C. to A.D. 1100), earthwork or “mound” construction (generally associated with burial of the dead) developed.

Wisconsin is the center of effigy mound culture.
Map and picture of Effigy Mounds National Monument (at left) courtesy of the National Park Service.

Wisconsin has a large number of such mounds, although many have been destroyed or otherwise affected by later development and natural processes. In Late Woodland times, Native Americans began to build animal-shaped or “effigy” mounds–birds, bears and panthers are common forms. Because of the especially dense concentration of effigy mounds in the state, Wisconsin is considered to be the center of what is referred to as “effigy mound culture.”

In addition to building mounds during the Woodland period, Native Americans developed other technological innovations including plant domestication, pottery and, late in the period, the bow and arrow. 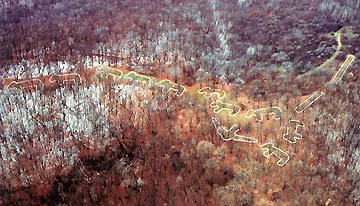 Many burial mounds, as well as other burial sites (both Native American and non-Native American), are in state parks, forests and other properties. Visitors should avoid walking over or picnicking on mounds and other designated burial sites. State law protects all such burial areas, including those on both public and private lands, against unauthorized disturbance.

Other mounds, such as platform mounds, are also protected as burial mounds even though they served different primary functions. Examples are those related to the Mississippian (not Woodland) culture of Aztalan. There are very few such sites in Wisconsin, but Aztalan is important as the northern expression of a Mississippian period "empire," directly related to the great site of Cahokia, Illinois [exit DNR] (near St. Louis), a World Heritage Site [exit DNR].