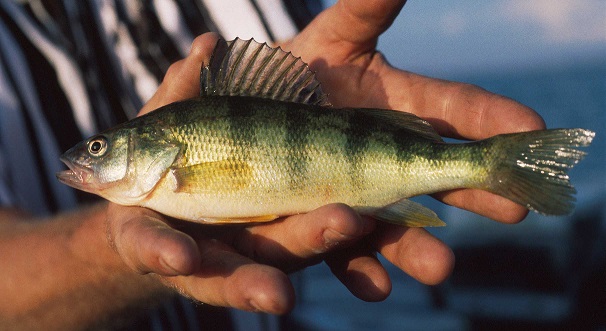 A large decline in the number of yellow perch surviving their first year of life has caused a reduction in the number of perch in Lake Michigan. Annual surveys of young-of-the-year (YOY) perch using micromesh gill nets and beach seines in the fall are usually good indicators of the number of fish hatched in a given year that we can expect to see as adults in future years. The number of YOY perch captured lake-wide has dropped dramatically since 1988.

The WDNR, along with other agencies and scientists, has used a variety of assessments to analyze the status of the current yellow perch population.  These assessments include 1) egg deposition, 2) spawning, 3) young-of-the-year (YOY) and 4) winter graded-mesh. In addition, several other studies have been conducted, including an alewife stomach content study, a lake-wide mark and recapture study and a reproductive status study.  These assessments are detailed below.

Yellow perch egg masses were identified by SCUBA divers at sites that 1) attract spawners, 2) were likely to trap drifting egg masses or 3) were traditional spawning grounds. All egg masses along a 300-meter transect were counted.

The purpose of doing these dives was to identify sites where egg masses were found and to develop an index of relative annual egg densities. During the initial years of the survey, we found very few egg masses. In 1997, divers searched for eggs for 31 hours and 40 minutes and found a total of 9 egg masses on the transects or nets or 0.50 egg masses per 1000 square meters. In 1998, divers searched for 12 hours and 48 minutes and found 0 egg masses or 0.0 egg masses per 1000 square meters. However, after the females from the 1998 year-class matured, we found good numbers of egg masses distributed on the Green Can Reef from 2001-2007.

Divers have observed few egg skeins since the late 2000s.  In 2010 weather and temperature patterns produced a very atypical spring and few ripe and spawning males were found during the perch spawning survey, which may have led to the small number of egg skeins found that year.  In 2012 egg skeins appeared to be well developed by early June, and therefore, we only conducted one day of diving.  Due to logistical and weather-related issues, we were unable to conduct the dive survey in 2015,2016, and 2019.  In 2017 and 2018, we completed one day of diving each year, and the results corroborated what we have been catching in both our graded mesh and spawning nets.  We saw four egg skeins in four dives in 2017 and 1 skein in 4 dives in 2018.

The main objectives of the yellow perch spawning assessment are to collect information on spawning fish, including length, weight, sex, condition, collect gametes for scientific studies, determine spawning sites and aid in any other lake-wide studies such as tagging and toxicological analysis.

Since 1997 WDNR has used graded mesh gill nets to quantify the relative abundance of mature female perch in known spawning areas. Nets are set overnight in various depths around the Green Can Reef off Milwaukee. Over the last decade, the number of yellow perch captured during our spawning assessment has continued to decline. In the early 2000s, we sampled approximately 1,000-2,000 perch annually, but that number has dropped to a low of 5 perch in 2017 and 8 perch in 2018 despite gill net effort spread over several weeks. The spawning survey was not conducted in 2020 but in 2021, a total of 21 yellow perch were captured. This continuing trend in our surveys indicates a low abundance of adult yellow perch in Lake Michigan off Milwaukee.

After a thorough review comparing raw data with electronic and table summary data, minor changes have been made to this table and its summaries.

Young-of-the-year (YOY) yellow perch abundances have proven to be a relatively effective predictor of future year-class strength. Index stations were added to the Michigan shoreline, where none existed before to improve the utility of YOY abundances as a predictor. They were compared with the relative efficiencies of beach seines and bottom trawls, the two most commonly used types of gear, so that all agencies can contribute to lake-wide abundance data. Until recently, YOY yellow perch have consistently appeared inshore seines in fall when littoral trawling has failed to find them. A review of work in inland lakes suggests that post-larval perch move nearshore during the day, which emphasizes the need to trawl different depths nearshore to track movements of fish.

In addition to the typical seine hauls, since 2002, Wisconsin DNR has used monofilament gill nets to increase sampling in nearshore waters. The protocol for this assessment has evolved over time, with changes in both the gill net mesh size as well as sampling locations.  The first gill nets consisted of 6.25 mm, 8 mm, 10 mm and 12 mm bar length mesh, each 10 feet long for a total of 40 feet per net.  In 2002 at least two sites were selected from each major port – Kenosha, Racine, Milwaukee, Port Washington and Sheboygan, and nets were fished overnight in 8-20 feet of water.  In 2003, Wind Point in Racine County and Doctors Park in Milwaukee County were chosen as index sites to sample annually, and the graded mesh nets were fished overnight in 5-10 feet of water.

In 2010 we moved one of our index sites from the Wind Point lighthouse to Shoop Park.  The park is on the south side of Wind Point and offers better sampling conditions because it is somewhat better protected from the wind.  In 2013 we added one-gill net set in South Shore Park in Milwaukee County, but no perch were caught so we did not return there again.  In 2016 we set at two additional sampling locations in Milwaukee County, off of St. Francis (south of the Milwaukee Harbor) and off of Bradford Beach (north of the Milwaukee Harbor).  YOY perch were caught at each location, but fewer off of St. Francis than Bradford Beach.  We continue to set off of Bradford Beach annually, in addition to Doctors Park and Shoop Park. In 2016,  it appears that was the most recent year of recruitment to YOY stage for yellow perch near Milwaukee. For years before 2016 and each year after there were minimal catches of YOY perch in this survey.

The major objectives of the winter graded-mesh assessments are to assess the year-class strength, sex ratio, age, growth and mortality of the yellow perch population in Lake Michigan.  We conduct five graded-mesh gill net sets offshore in Milwaukee County and use these data to estimate the year-class strength of the yellow perch population in Wisconsin waters of Lake Michigan. 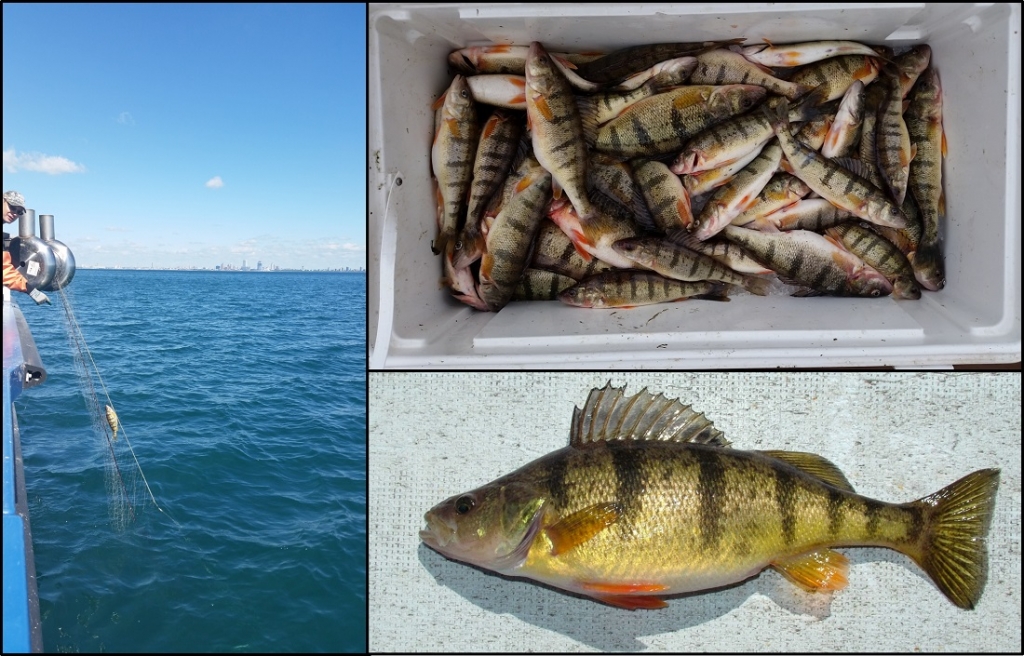 The recruitment of younger yellow perch has been very poor since 1990. This is reflected in the graded mesh assessment by poor representation of smaller (younger) yellow perch in the smaller mesh panels of the net.

The sex ratio of yellow perch caught in 2000-2002 was over 60% female, which was much different than the 1990s when the exploitation rate from commercial and sport anglers was much higher.  In the mid-2000s, the sex ratio was closer to 50:50, but through 2017 the catch has been heavily dominated by females. Since 2017, there have not been enough yellow perch captured in the survey to produce a meaningful sex ratio estimate.

Numbers of yellow perch caught during the winter graded mesh gill net assessment have declined to record lows in recent years.  The low abundance of adult yellow perch off Milwaukee is corroborated by low numbers of perch captured during our spawning assessment, in addition to low sport fishing harvest.

Adult alewife were sampled using a graded mesh gill net (1 to 2 1/2 inch stretch mesh). Nets were fished at sunset for 30 minutes. Alewife were measured and their stomachs removed and immediately preserved in 95% ethanol. In addition, a plankton net collected available food sources for the alewives. In 1997, a total of 340 alewife stomach samples were obtained from adult alewife in Lake Michigan during 6 nights of sampling. No larval fish were found in any of the alewife stomachs. Copepoda dominated the diet of alewives, comprising by number 95% of the diet. A plankton net collected available food items, and again, Copepoda were the dominant prey available. In 1998, one night of fishing was conducted. Due to the low to zero numbers of larval yellow perch in the plankton nets, this was our only set in 1998.

Data from surveys conducted lake wide by agencies in each state have indicated that the production of young-of-the-year (YOY) yellow perch in Lake Michigan has been minimal since 1989. This recruitment failure has resulted in a 90% to 95% reduction in assessment catches in Wisconsin and Indiana waters, and an 86% decline in Illinois. In addition, the average age of yellow perch captured in assessment catches has steadily increased. Without vital information about lake-wide movement, spawning site fidelity and the abundance of the spawning population, management strategies implemented to protect existing yellow perch stocks and enhance population recovery may be ineffective or could adversely affect the restoration and sustainability of the yellow perch fishery.

To effectively manage any sport or commercial fishery, estimates of population size and mortality rates are needed. Although a number of yellow perch tagging projects have been conducted in Lake Michigan and its embayments in the past, these efforts were conducted independently of one another, and only one was known to have included an objective to estimate perch abundance. By conducting a collaborative lake-wide tagging study that incorporates standardized mark and recapture methods along with enhanced recovery efforts, we will be able to generate estimates of local perch population abundance that will be comparable among jurisdictions. 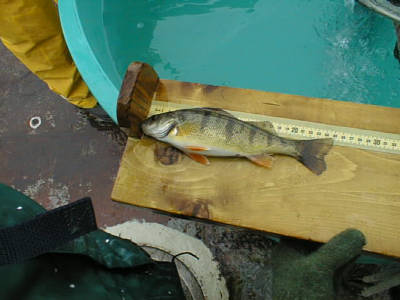 Results from this study can be read from:

After spawning, the sex organs of mature female fish recover and fish begin to invest energy into developing oocytes (eggs) and milt (sperm) for the next spawning season. Ovaries and testes develop over the summer and winter until these sex organs are again ready for spawning. The sex organs of a fish can be examined to indicate how ready the fish is to spawning, also referred to as their reproductive status. The health of the ovaries and testes are important to the success of spawning and survival of hatchlings and young-of-year (YOY) fish. Other parameters, such as hormone and protein levels in the blood, can also provide information on the reproductive status and health of the fish. 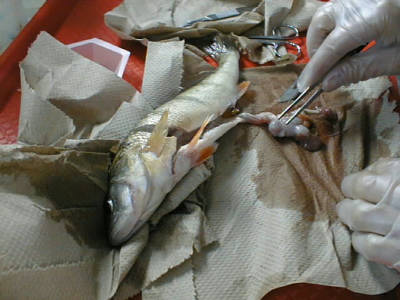 The objective of this study was to examine the reproductive health of yellow perch from Lake Michigan and the exposure of these fish to pollutants. Yellow perch from Lake Michigan and a reference site, Lake Mendota Wisconsin, were collected in winter 1996, at spawning in 1997 and in fall 1997. Endpoints included stage and histopathology of ovaries and testes, plasma hormones and vitellogenin, liver mixed-function oxygenase activity (EROD), indicators of pollutant exposure, and other parameters. Analysis of variance was conducted to test for the significance of site, sex, year class (age), and gross gonad stage.

Reproductive parameters differed between sites in some seasons, but other main effects and interactions were also significant. In general, Lake Michigan females had vitellogenin levels comparable to males. A greater percentage of Lake Michigan fish were at earlier stages of gametogenesis at each season. Also, a higher percentage of males from Lake Michigan exhibited testicular neoplasms.