As the lake's top predator, it's common for chinook to travel hundreds of miles to feed as they mature; At any given time during the summer, a Wisconsin angler may catch Chinook stocked in Wisconsin, Michigan, Illinois, or Indiana. At the same time, state anglers are benefiting from the natural reproduction of wild fish mostly coming from Michigan streams and tributaries to Lake Huron. However, no matter where you catch the fish Wisconsin stocked fish are showing up well in the harvest meaning that our fish are surviving well and being used by our angling public. Contributions of Wisconsin stocked Chinook salmon caught by Wisconsin lake anglers starts to increase during late August to early September, as mature Chinook salmon return for spawning in rivers where they were stocked.

Chinook salmon tagging for the multistate project began in 2011 and Chinook were tagged lake-wide for 6 years through 2016. Results of the analysis show the fish stocked by Wisconsin DNR appear to survive at better than average rates and account for a comparatively large percentage of the stocked chinook salmon harvested throughout Lake Michigan.

Other important insights from the work include the fact that natural reproduction accounts for some 60 percent of the chinook population from many year classes.   USFWS has reported that “estimated production of wild Chinook salmon from the 2017 year class was greater than the weak 2013 and 2015 year classes and was just below the level observed from most year classes from the mid- to late- 2000s” and “68% of Chinook salmon (all ages) recovered in Lake Michigan and 68% recovered in Lake Huron were without a fin clip and presumed to be wild, consistent with values from the past several years.”

Under the auspices of the Great Lakes Fishery Commission the overall fisheries management goal established for Lake Michigan in the Fish-community Objectives (FCOs) is to restore and maintain the biological integrity of the fish community so that production of desirable fish is sustainable and ecologically efficient.  The salmonine objective specifies the establishment of a diverse salmonine community capable of sustaining an annual harvest of 5.9 to 15 million lbs., of which 20-25% is lake trout Salvelinus namaycush.

Inherent in this objective is the desire to maintain a salmonine community that has abundant levels of Chinook salmon Oncorhynchus tshawytscha (i.e., target annual yield of 6.8 million lbs.) sufficient to suppress alewife Alosa pseudoharengus populations but not beyond levels where predator consumption would threaten food web integrity. Maintaining a sustainable balance between predator/prey is critical to protect the fishery, especially during recent years when alewife biomass has been historically low. The Salmonine and Planktivore Objectives are based on the understanding that large populations of exotic forage fishes, such as alewife and rainbow smelt Osmerus mordax, negatively impact the recruitment of native fishes, and that controlling exotic prey fishes presents an opportunity to create new, diverse fishing opportunities. Therefore, progress toward these objectives is evaluated by determining the relative balance between predator and prey (e.g., Chinook salmon and alewife interactions) rather than suppression of alewife through extreme top-down predation.

Chinook salmon stocking levels were highly correlated with harvest in the first two decades of stocking (i.e. the more we stocked the more Chinook salmon were caught by anglers). However, that changed during the early 2000s. It is apparent that trends in harvest are no longer related to stocking alone and that other factors are influencing the survival and growth of stocked fish. In addition, there are now naturally reproduced Chinook salmon that add to the harvest. The bottom line is that Chinook salmon management is now more complex. 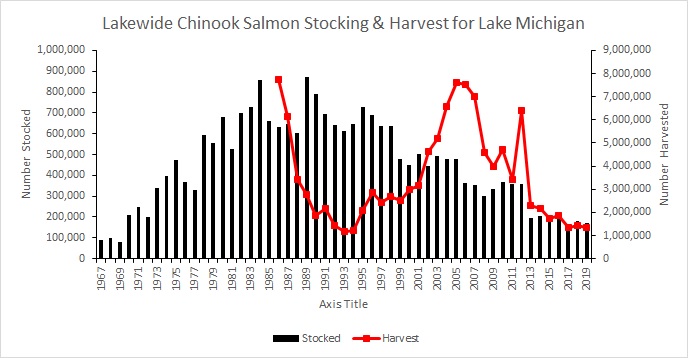 The main factor during the mid-1980s was that Chinook salmon experienced a noticeable disease epizootic (Bacterial Kidney Disease) and a significant decline in abundance in 1987-88.  This disease was brought on in part by a declining forage base causing a decline in the health of Chinook salmon. It was not until 1999 that a coordinated Chinook salmon stocking reduction was implemented in hopes of restoring prey fish populations to increase Chinook salmon survival. In addition, increased vigilance was taken against BKD and other diseases including substantial research, disease monitoring, and modifications to hatchery practices. With these measures, prey fish and Chinook populations rebounded and culminated into record-high Chinook salmon abundance and harvest of the mid-2000s.

Recruitment of naturally-produced Chinook salmon smolts has increased since their introduction in 1967. Natural reproduction has been estimated periodically throughout the period 1985-2008. Estimates in the early 1990s from oxytetracycline (OTC) studies suggested that natural recruitment accounted for 29-35% of lakewide adult stocks when stocking levels were near their highest.

From 2006 to 2010 fish managers around the lake marked all chinook stocked from hatcheries using oxytetracycline (OTC) so that hatchery fish can be distinguished from naturally reproduced fish. The OTC is mixed with food, fed to chinook fingerlings while in the hatchery. OTC is an FDA approved antibiotic used in treating fish that has the side effect of laying down a mark on bony structures, (like vertebrae) that fluoresces under ultraviolet light. By collecting a vertebra from angler caught salmon, fish biologists can determine if the chinook was stocked or naturally reproduced.

Estimates for 2001-2003 from OTC-marked fish collected in 2004 and, more recently, estimates from the lakewide OTC evaluation starting with the 2006 year-class, indicate that natural recruitment has increased.  The combined year-classes of 2006 - 2009 Chinook salmon was estimated to be over 50 percent from natural reproduction. This high percentage means that the reproduction of salmon plays an important part in the strength of the predator base in Lake Michigan.  Combining this factor with low prey fish abundance, low average weights of Chinook salmon and other factors, Fisheries Managers agreed that we had too many predators in the lake and reduced total Chinook salmon stocking in 2013 to align the Chinook salmon population more closely with prey abundance. 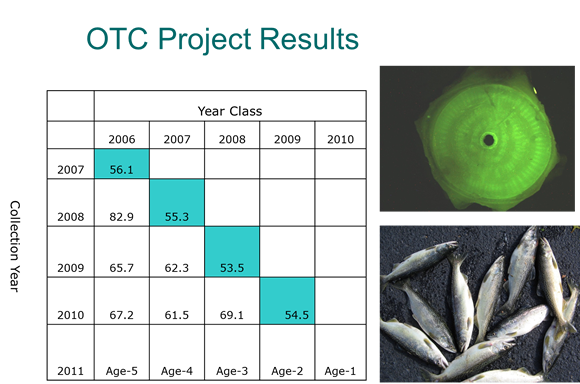 Recent generations of chinook salmon bound for Lake Michigan were marked with coded wire tags (2011-2016), a technology that has been around for decades but is now more fully automated. The tags are quite small, only about 1/25 of an inch long (1mm), but contain a wealth of information that has helped greatly to understand the biology and movement of Chinook salmon in Lake Michigan.

The process of tagging each and every chinook is an immense undertaking. It is made possible with four massive tagging trailers owned and operated by the U.S. Fish and Wildlife Service. Each year, fish and wildlife service staff tag millions of fish with these computer-operated, state-of-the-art trailers. Each trailer is capable of tagging as many as 8,000 fish per hour. In addition to implanting the wire tag, the trailer also clips only the adipose fin, the small, fleshy fin just in front of the tail fin. It serves as an external indicator the fish is likely tagged.

Automated tagging has many advantages. In addition to tagging fish more quickly, the automated process has a higher success rate when it comes to the tag going in and staying in the snouts of juvenile fish. Finally, the fish and wildlife service estimates an 11 percent reduction in total costs when using the automated system instead of tagging by hand.

Coded wire tags are made of patented alloy steel that is injected into the snout of a fish. Despite their size, these tags provide the potential to collect a lot of information about the fish when it is captured. Each tag is engraved with a number (the "code") that corresponds to a batch of fish. When the fish is caught, the tag is removed from the snout of the fish and examined. The number is recorded and, when combined with other tag returns, provides researchers with information about the age of the fish, where it was reared, and where it was released.

Regardless of where a fish travels, if it is caught, state or federal biologists will be able to analyze the data from the tag and record it so all agencies can learn more about how chinooks move, survive, grow and reproduce within the lake. Most of the information gathered comes from tagged fish collected through concentrated efforts of state and federal biologists working with anglers at boat landings and fishing tournaments where heads can be collected.

Agencies began the collection of coded wire tagged one-year-old chinook salmon in 2012 primarily from angler caught fish along Wisconsin's shoreline from Kenosha to Marinette. Results confirm what biologists have seen over the years both by observation and other studies – that chinook salmon stocked in Lake Michigan move throughout the lake and that chinook salmon caught in Wisconsin during the summer originated from stocking locations in Michigan, Illinois, Indiana, Wisconsin and even Lake Huron.

The success of the tagging program doesn't lie solely in the number of fish tagged, but rather in the information gathered from them. The data collected during the next decade will prove invaluable in charting more effective management strategies throughout the Great Lakes system. By learning more about chinooks and how they live and reproduce, scientists can adjust the numbers and species that are stocked in hopes of maintaining a diverse and healthy fishery.