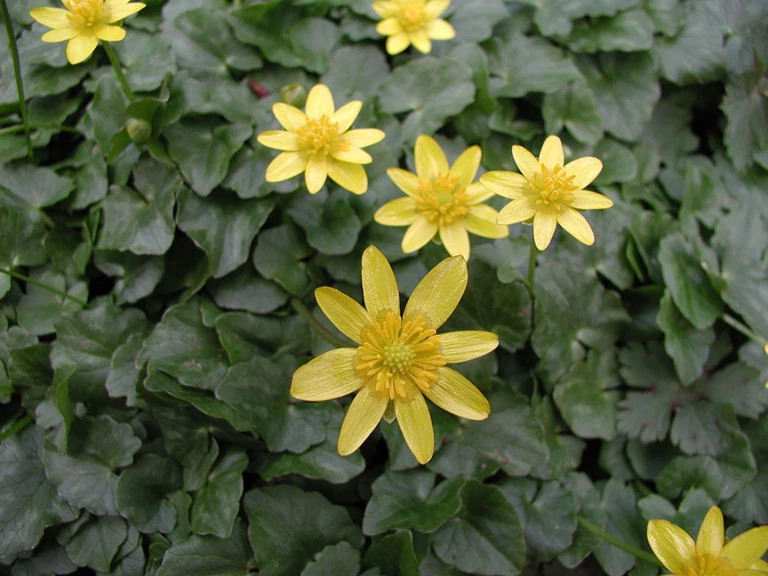 MADISON, Wis. – The Wisconsin Department of Natural Resources (DNR) is calling on gardeners, paddlers and hikers to keep an eye out for and report lesser celandine, an aggressive invasive plant whose showy yellow flowers are visible now.

Lesser celandine (Ranunculus ficaria or Ficaria verna) invades forests, wetlands and shoreland areas, as well as upland areas and disturbed areas such as lawns. It is poisonous to livestock and humans, and infestations of this plant kill off spring wildflowers in woodlands.

Also known as fig buttercup, lesser celadine is a prohibited species under the state’s invasive species rule. Prohibited species are those that are not known to be in the state or only in small selected locations, so containment is feasible. It is illegal to sell, transfer or transport prohibited species and they must be controlled when found on public or private land.

“Lesser celandine has been found only in a few areas in Wisconsin, and early detection is the key to stopping invasive species,” said Jason Granberg, DNR Invasive Species Specialist.

Most lesser celandine found in Wisconsin were in the Milwaukee metropolitan area and Lake Geneva, with a few plants reported in Madison and Rock County as well.

Lesser celandine prefers moist forest soils and is often found along forested riverbanks. The plant spreads primarily by vegetative bulbils, which are small bulbs, formed where leaves join the stem. They break off to float downstream or moved by rodents and form new plants.

The plant is a low-growing perennial in the buttercup family with kidney- to heart-shaped leaves and showy, daisy-like yellow flowers very early in spring. Lesser celandine resembles native marsh marigold, but the larger marsh marigold has five to nine petals while lesser celandine has eight petals.