Cedar waxwing on the fly 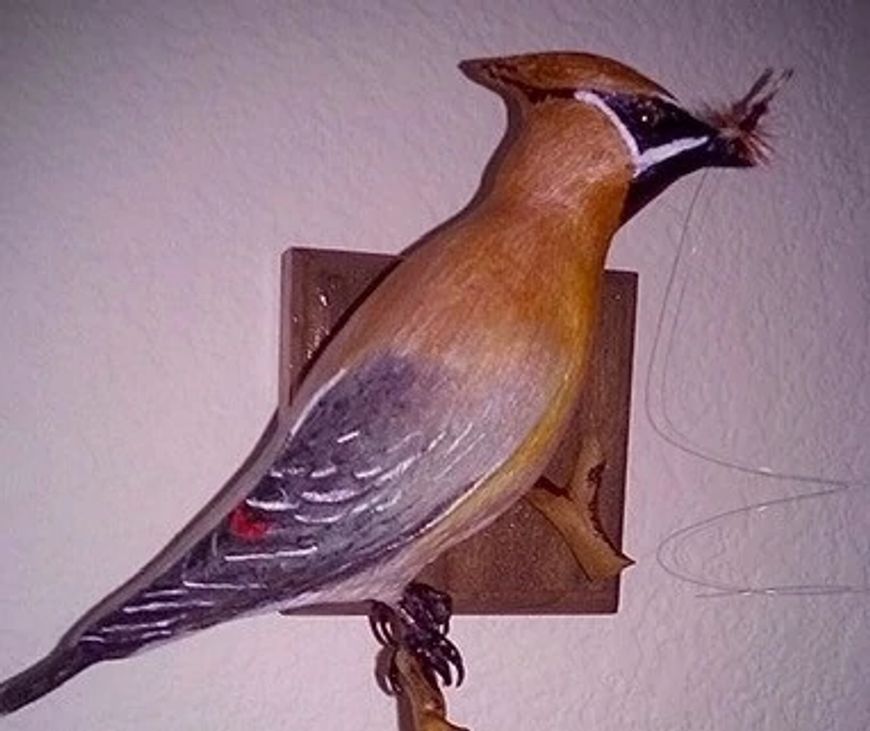 JERRY PERKINSJerry Perkins' wood carving recalls a crafty cedar waxwing that made off with his trout fishing fly.

In the Fall edition, I noticed the page with the photo of the cedar waxwings right across from the story about the friendly grouse. It reminded me of my encounters with cedar waxwings while trout fishing.

In this part of  Wisconsin, around Eau Claire, when I go trout fishing I also look to see if cedar waxwings are actively picking flies over the streams. If they are, I will try to find out what they are eating and “match that hatch.”

The following story has happened numerous times, but the first time caused me quite the surprise.

I was standing in the middle of the stream holding my fly rod up under my arm while trying to tie a new fly onto the tiny leader.  All of a sudden, I felt my fishing rod move and realized it couldn’t be a fish because I had the leader in my hand.

I looked up, and there was a cedar waxwing trying to land on the tip of my fly rod — I assumed to gain the most advantageous position on the stream.

It tried balancing on one leg then the other on my rod. After a few seconds, it gave up and landed on a branch that was near.

Encounters of that sort with cedar waxwings have been quite common in my fishing experience in the smaller streams here.

The birds seem to be smart enough to want to position themselves in the most opportune place, which is usually on some branches along the stream side. However, if there is a stick in the middle of the stream, they will try to sit on that and wait for the flies to hatch — then they don’t have to fly as far to try to catch the fly. 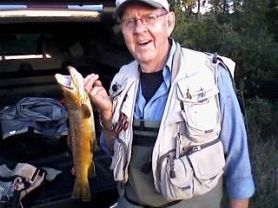 Jerry Perkins — my elder brother with whom I have fished on a regular basis — made a carving to represent this unique fishing bird encounter. We both have had this experience with cedar waxwings.

If you know about trout fishing, you know the leader is very fine and can be easily broken off.  This particular carving represents a moment when a cedar waxwing grabbed the fly as Jerry was casting.

At just the right angle and with the right amount of pressure, the bird broke off the leader and flew away with the fly in its beak.

Jerry has been carving birds for many years. He has carved pileated woodpeckers, ducks — you name it, he has carved it. His house is filled with carved birds. 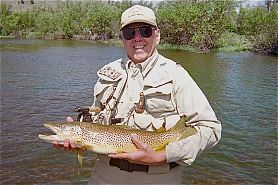 COURTESY OF DAN PERKINSFishing has been a lifelong passion for Dan Perkins.

My father taught fly fishing to me, Jerry and our other siblings as we were born and raised in Spooner. Jerry worked for the DNR in fish management for nearly 40 years, including as a fisheries technician in Barron. He was a great advocate of the northern pike, or as he used to say, “the people’s fish.”

For a number of years, he spent time at the Wisconsin State Fair, putting on demonstrations of filleting northern pike. He used them for a fish boil and provided taste samples to those in his audience who wanted to try it.

On the DNR website, if you search for “fillet northern pike,” it takes you to a PDF page of detailed line drawings that show how to fillet this fish. At the bottom just under the fish drawings, you will see it was developed and drawn by Jerry Perkins.

Jerry has a birthday coming up on April 12 and will be 83. I have fished trout most of my life here in Wisconsin. I’m 80 now and still able to enjoy it.

Dan Perkins, Ph.D., taught communications at Iowa State University and UW-Eau Claire for four decades and has been fishing for twice that long.