On fishing and outdoor experiences

IN THIS ISSUE: Expanded fishing coverage 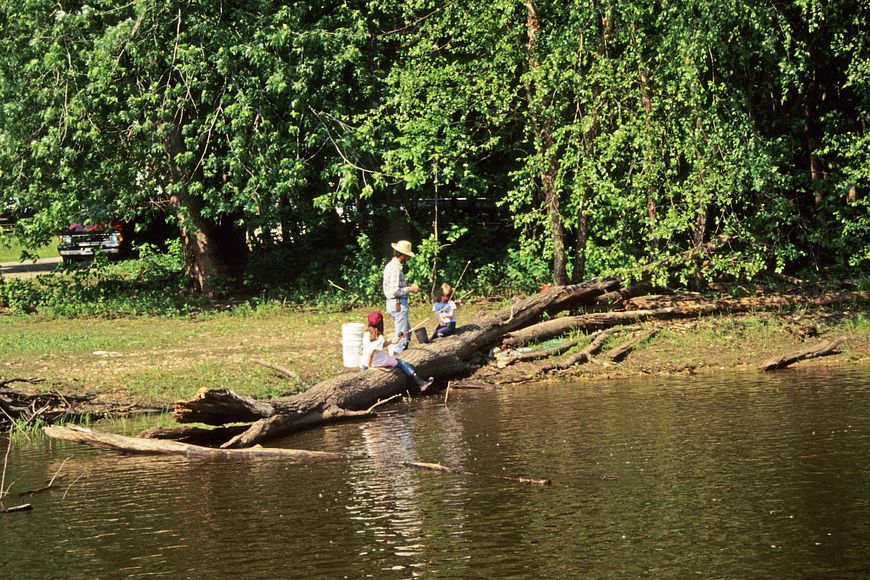 DNR FILESWyalusing State Park has been a glorious fishing spot for generations.

‘Behind the park’ for magical fishing of a boy’s dreams

When I was finally old enough to dress myself, my older brother, Mike, and I got to spend a short week each summer with our grandparents, Lucile and Lyle Bellrichard.

Early in the morning, Grandpa would wake Mike and me by saying, “It’s time to go behind the park.”  That meant fishing in the river backwater near
Wisconsin’s Wyalusing State Park.

The park is located at the joining of the Mississippi and Wisconsin rivers, which created one of the richest and wildest fishing opportunities a boy could dream of.  The backwaters were mysterious and magical in my young mind.

Often, we would arrive just as the fog was lifting off the water. Only Grandpa knew what was hidden by this fog and, as such, Mike and I stayed close to him until it lifted.

Grandpa always started the day by taking the trail left of the boat landing. This backwater and the fish within were protected by a dizzying array of obstacles for a young man to overcome — boot-sucking mud, snakes, mosquitoes and burning nettles, to name a few.

Suffice to say you had to watch where you stepped. Grandpa always wore hip waders, whereas Mike and I wore rubber boots much more prone to unintentional removal. More than once did I spend a morning with mud between my toes inside a hot rubber boot.

The most obvious obstacles were the downed trees, typically cottonwood. These half-submerged giants left little open water for casting and playing hooked fish.
To overcome this, Grandpa fished with a cane pole equipped with a relatively short and stout leader. He would methodically probe each opening in the tree branches as he worked his way outward and onto the log.

When the water was muddy, Grandpa added something near the worm-covered hook to get the fishes’ attention, typically a dime-sized spinner blade or a homemade minnow.  The minnow was made from an elongated football-shaped piece of aluminum cut out of a beer can, typically Old Milwaukee.

In retrospect, this sky-facing minnow did not look very realistic. But it was fish approved, and that’s what mattered.

The sought-after fish were bluegills and crappies. I think crappies were his favorite, but the bluegills were more prevalent. I remember Grandpa saying he was mostly made of bluegills and potatoes, because that’s what they had to eat when he grew up during the Great Depression.

Grandpa was not a catch-and-release guy, but he was size selective and always gently unhooked and returned smaller fish. Waste not, want not.

Steve Bellrichard grew up in southwest Wisconsin and now lives in Danville, Iowa. 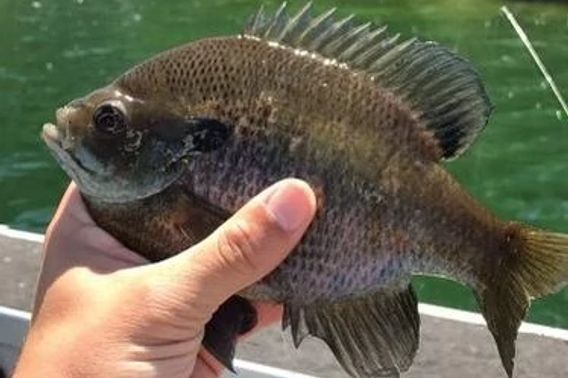 Memories linger, even if fishing doesn’t

My grandparents lived on a farm when I was a kid — small by most standards, about 100 acres, but a vast and wondrous domain to my 10-year-old self.
The farm was walking distance from my own rural home, and I headed there whenever schoolwork wasn’t in the way (sometimes when it was). I relished the chance to explore everywhere, hiking the rolling farm fields and nearby woods, spotting wildlife, wetting my feet in the cold waters of the narrow creek and fishing in one of two small ponds.

Several old fishing poles, nothing more than a stick of bamboo with a line, bobber and hook attached, stood at the ready for us grandkids in the kitchen corner. Turn over a couple shovels full of rich soil at the edge of Grandma Julia’s garden — mind the squash — and we had enough worms to last the afternoon, carried along with us in an old cottage cheese container.

We caught nothing more than a few small bluegills and catfish, but what treasures they were!

Such are my memories of fishing, something I haven’t done in years. I envy those who do fish now and know I should add it back to my list of outdoor activities.

Putting together this coverage on fishing has made me realize how easy that would be — and how rewarding. I hope those who don’t fish will feel that way, too, and give it a try. Or try it again if it’s been awhile.

And for those who already consider themselves anglers of any sort, waiting patiently for the start of another season: Good luck and good fishing! 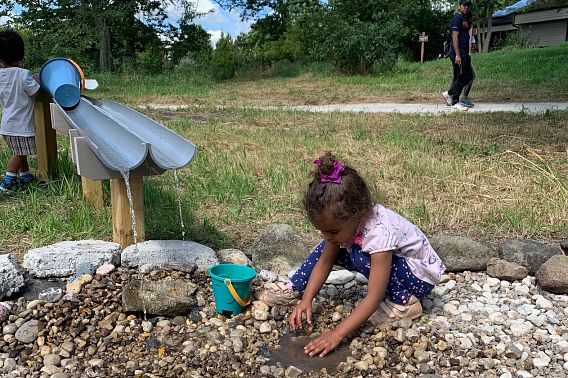 DNR FILESThe DNR stands committed to welcoming everyone to the great outdoors.

Working to welcome everyone to Wisconsin’s great outdoors

Between my out-of-state college experience and military travels abroad, I’ve spent a lot of time explaining to people unfamiliar with Wisconsin that there’s more to the state than just beer, cheese and the Green Bay Packers.

I’d say my most significant contributions as an unofficial state spokesperson have come from convincing folks there are indeed other Black people, like myself, living in the state.
The fact is, I’ve spent most of my life taking pride in being from Milwaukee. But in recent years, I’ve realized how little I know about the amazing natural resources that make this such a great place.

When I began working for the Department of Natural Resources, I was excited for the opportunity to discover parts of the state unfamiliar to me. My newfound knowledge of how people explore the outdoors in Wisconsin has grown tremendously, and I can’t help but feel like I’ve stepped into a secret club that has eluded people of color.

I first became aware of the outdoor divide when I transferred from a Milwaukee high school to one in Brookfield, going from predominantly Black schools my whole life to the complete opposite. Not only did none of the kids in this new school look like me, but their extracurricular activities were far different than anything I knew.

Between talks about camping or four-wheeling and camouflage-patterned clothing with matching accessories, I was in unknown territory.

Although transferring high schools gave me every opportunity to explore the great outdoors, I didn’t. And here’s why: It was out of my comfort zone, and for me, it wasn’t cool. And at the tender age of 14, those two things outweighed everything else.

Having grown up in predominantly Black communities, activities like fishing, hunting and hiking to me were deemed interests reserved only for white people. I never knew anyone who looked like me who went hunting or took a trip to a state park or showed pictures from a summer camping vacation. I also don’t ever remember being asked to go on any outdoor adventures.

Why are outdoor traditions such as hunting, fishing and hiking so foreign in Wisconsin’s Black communities or other communities of color? Why weren’t my parents, like those of the kids I observed in my new school, passing down a love for outdoor recreation?

Or, an even bigger question: Why do people of color not feel welcome in the outdoors?

When Black people moved to Milwaukee during the Great Migration, segregation and discrimination ran rampant. Fast forward to 2021, and segregation in Milwaukee remains among the nation’s highest.

The pandemic has encouraged people to turn to the outdoors as a respite and a place to seek space. Yet headlines tell stories of people of color being confronted or even assaulted when pursuing outdoor activities — which, in my opinion, reinforces collective fear and perpetuates the stereotypes of my youth.

Despite it all, I’ve seen an increase in representation by people of color outdoors  — in the media and in my own experiences — as well as an uptick in groups tackling issues of racism and promoting diversity in the outdoors, including right here at the DNR.

I’m incredibly proud to be part of the initiatives in motion from the DNR to foster inclusion and diversity in the outdoors by creating exposure in all communities. The opportunities and benefits of outdoor recreation are right in our back yards — and open to all.

Joshua Morris is a public information officer in the DNR’s Office of Communications. 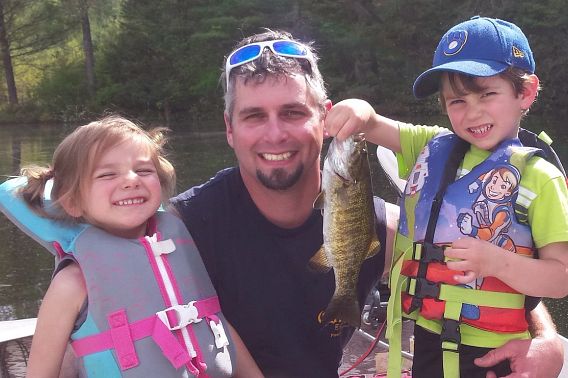 COURTESY OF LAWRENCE ESLINGERDNR fisheries biologist Lawrence Eslinger enjoys fishing with his family in all seasons.

Why I fish: No limits to learning and fun

I am intrigued by the great outdoors — its beauty and the mysteries within.

Fishing is just one aspect of the outdoors I thoroughly enjoy, so much that I pursued a career in working to make fishing and fish populations better.

I was introduced to fishing at a young age, fishing frequently during the summers of my youth. My grandfather was an avid fisherman who would fish as much as he could.

We would venture out on the water in his small rowboat, equipped with an old rumbling outboard, and fish his favorite spots. Though his directions were stern at times, those fishing experiences with him taught me well.

After fishing, he would fillet the fish and I would remove the skin from the fillets. Although I’d try, I couldn’t keep up with him, even though I had the easier job. In the end, we usually had a meal of fish to enjoy later, and I took pride in the fact we were eating something I had contributed toward.  Those experiences were always fun and rewarding.

As I got older, my cousin and I would ride our bicycles down to the local lake and fish for bass from shore. Catching a few, dealing with snags and having fun with family and friends is what it’s all about!

As I matured as a fisherman, I really started to enjoy the pursuit of more elusive species like walleye and musky. Studying lake maps, fishing new spots and trying new techniques were all a part of the enjoyment.

Sometimes, the pieces came together and fish were caught. However, success was often limited, forcing me to refine my strategies. Always learning and experiencing something different are big parts of what keeps fishing enjoyable for me.

Now that I have a family of my own, the most meaningful parts of fishing extend from the smiles, laughs and life lessons my children experience as a part of the adventure. Many of those fishing outings I’ll never forget, and likely some they won’t either.

My son — who is 9 now and was 5 at the time — reminds me of the occasion I got poured on after we made it back to the boat landing just in time for an incoming rainstorm. I got him into the truck before the rain, but I got soaked while trailering the boat and securing the gear.

He watched it all with a smile, and although the fish hadn’t bitten as well as hoped that day, the real joy was in the adventure together.

Another fishing experience that left me with a lasting smile was during a family ice fishing outing. My daughter — 7 now and 5 when it happened — was jigging as patiently as a 5-year-old could. Suddenly, she started to scream with excitement.

As I looked over, a nearly 10-inch perch came flying from the hole after she had successfully reeled it up and hoisted it out by herself.  We were a little wet from fishing in the slush that afternoon, but what fun we had!

It can provide limitless adventure, learning and fun — at least that’s been my experience!

Lawrence Eslinger is a DNR fisheries biologist and dedicated angler.