BACK IN THE DAY

Her life is a rich tapestry of nature 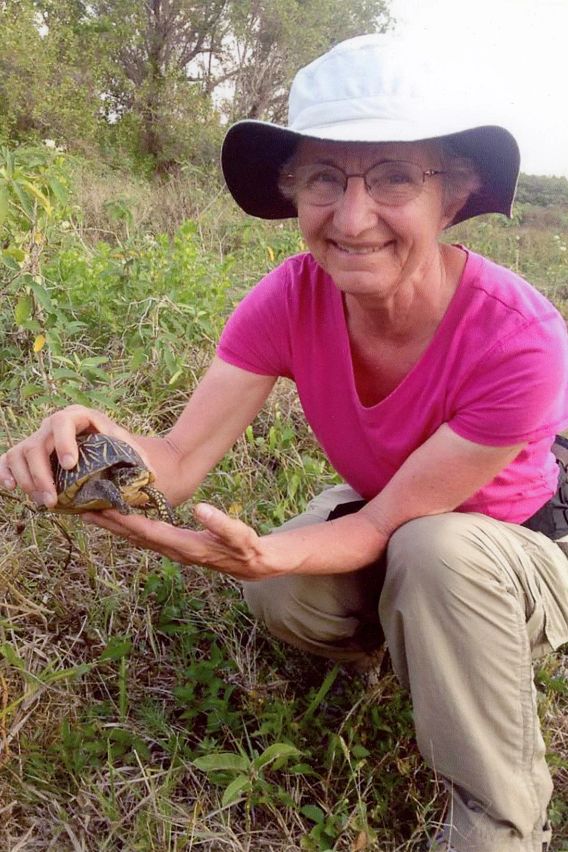 COURTESY OF ANITA CARPENTERLove of the outdoors and a sense of adventure have yielded many rewarding experiences for Anita Carpenter, shown with a Florida box turtle during a trip to the Everglades.

When Anita Carpenter was a regular contributor to this magazine, people used to tell her that her stories were the first thing they looked for when each new issue arrived in their mailboxes.

She recalls today how humbled and proud that made her feel. And there is a lot to make her proud — all told, there are some 75 of her “nature notes” in the magazine archives, from early 1989 through 2012.

A pharmacist by vocation, Carpenter spent her spare time walking the fencerows near her Oshkosh home, focusing on the intricacies of nature that inspired her two avocations — writing and free-form quilting. Her nature-themed quilts were featured in a story by David L. Sperling, “Piecing together nature,” in December 2008.

Carpenter retired in 2012 and now spends some of her time, as she said, “doing what I was meant to do,” volunteering with the UW-Oshkosh grounds crew as their “prairie keeper.”

“Our goal is to make the campus more environmentally friendly and sustainable,” she said. “I love what I do — erecting bird and bat houses, maintaining a monarch way station, enlarging natural areas on campus by reducing mowing. We promote native plants and trees and attack invasive species whenever and wherever
we find them.”

Carpenter continues to monitor birds on her daily 5-mile walks along the Fox River that winds through campus. She hikes the route — her “river oasis” — each morning no matter the weather.

“I call some days ‘weather days’ and the wilder the better,” she said. “Blizzards are the best!”

Perhaps it’s that sense of adventure that drives her otherwise domestic passion for quilting. Free-form quilting is a bit different from other kinds of quilting and involves stitching shapes onto the quilt back, rather than sewing precise geometric shapes together.

“My quilts are all original, scientifically correct nature quilts,” she explained. “They are very intricately detailed, based on what I’ve observed over the years. My last completed quilt was named ‘Nature’s Glory.’”

That quilt has 10 panels depicting species from across the country in habitats she has visited as part of the UW-Oshkosh biology field trip program.

Among the panels are an American goldfinch atop a flowering compass plant, baby sea turtles making their way to the ocean, a coral reef and a Northwoods winter scene with a soaring raven and winterberry along a creek. Another panel represents species she saw on an Everglades field trip.

Carpenter’s current quilting challenge was born of necessity, and she is having a lot of fun with it. Last April, at the start of the coronavirus pandemic, she found herself homebound and unable to visit a fabric store to begin a new quilt.

“People who don’t sew just can’t imagine what that’s like for a quilter,” she said. “I knew, with the world turned upside down, just what I would call my new quilt — ‘Pandemic Pandemonium: Chaos in Nature’! I scrounged through all my fabric and made do with what I had on hand.

“Among the creatures on the quilt, you’ll find scientifically correct fish — swimming upside down — or a saguaro cactus in a Northwoods scene. And if you look closely, you’ll see a pink snowshoe hare ‘camouflaged’ in the snow.”

Just like her other nature-based hobbies, her quilting can become all-consuming.

We invite readers to take a lesson from Carpenter’s playbook this spring. Whatever the weather, there’s no better time to throw off winter’s doldrums and get lost in nature. If you can’t find a fencerow to walk, there are plenty of public places out there just waiting for you to visit.

Reprinted here is one of her first columns from the April 1989 issue of Wisconsin Natural Resources magazine.

Secrets of the fencerow

Narrow strips of trees, shrubs, fieldstones and tangled vegetation border many Wisconsin fields. These fencerows are home and refuge to numerous animals and plants. 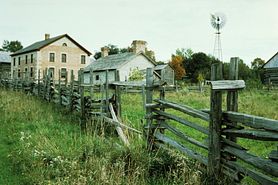 DNR FILESA springtime walk along a fencerow can reveal violets poking through the leaf cover or white-crowned sparrows on their way to northern breeding grounds.

In the springtime softness of a warm April day, slip on rubber boots and walk along one of these fencerows. Discover its residents and visitors before new leaves obscure the secrets.

You may find a bulky stick nest hidden within the thorn-covered branches of a hawthorn where, last year, brown thrashers raised four young. Perhaps you will flush a ring-necked pheasant, be scolded by an impish chipmunk or serenaded by an eastern bluebird.

You may see a late-departing northern shrike on its treetop perch surveying barren fields for its next meal. You may not see the cottontail rabbits that call the fencerow home, but gnawed stems of wild roses and ubiquitous droppings are telltale signs they were here.

With a burst of purple, violets poke through the brown leaf cover. Bittersweet entwines young saplings and fieldstone. In the coming months, it will produce orange fruits relished by residents and visitors to the fencerow.

The musky scent of red fox floats on gentle breezes. Is there a vixen nearby nursing newborn pups?

Perhaps you will chance upon several small birds that are searching for seeds by vigorously hopping and scratching the ground with both feet. A proud, upright posture and puffy, broad black-and-white stripes on their heads quickly identify them as white-crowned sparrows, Zonotrichia leucophrys. They’re often seen in small flocks.

The 6- to 7-inch sparrow has a steel-gray unstreaked breast and face, white throat and belly, and the typical sparrow-brown back and wings, highlighted by two white wing-bars. The sexes look alike.

White-crowned sparrows visit fencerows during migration. We are most likely to see them from late April into May. They do not nest in Wisconsin but are north-bound for the brushy, stunted-tree habitat of the subarctic.

The female builds a small, cup-shaped nest on the ground or in a small shrub. She’ll likely raise only one clutch of three to five young during the short northern summer.

The sparrows reappear in Wisconsin during October, en route to their winter destination in warm southern states.

You won’t find the secretive white-crowned sparrows along every fencerow, but don’t be disappointed. Take another walk in the glorious springtime warmth. Witness the rebirth of spring as you discover the secrets of the fencerow.