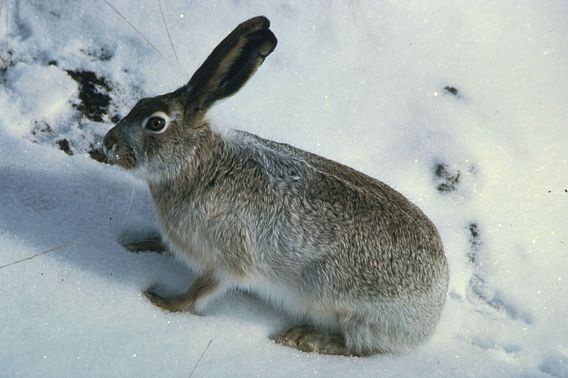 ©DNR FILESWhen hunting rabbit, if you see one of these — a white-tailed jackrabbit — don't shoot! They're rare and protected. Instead, call DNR and go buy a lottery ticket — in that order.

My brother-in-law, Joe, who grew up on a modest farm in Mukwonago, can hunt and trap anything in the state — and probably has at some point.

“I could feed them that way if I had to,” he has said to me enough times that it stuck, referring to his family and his ability to find food within our state’s natural resources.

A seasoned forager, too, he once bestowed me with more wild watercress than the whole bottom shelf of our refrigerator could handle. Chefs all around me gained the benefit of that gift.

It was through Joe that I first came to taste and enjoy wild rabbit, and it is my firm belief that more of  Wisconsin’s hunters should take advantage of the spectacular rabbit hunt available to them over the winter.

I grew up with a family that embraced the whole endeavor. Hunting wed them closer to the land, the seasons, the wildlife and the weather. Hunting was as much ritual as recreation, camaraderie as contemplation.

I always recall a grim drop-off in their demeanor as the deer hunt faded to winter’s grip. Gun gone to muzzleloader then to antlerless. With each advancing date, they would acquire a faraway look in their eyes until there was nothing to do but wait until spring arrived — and with it, turkey hunting.

It took a few years for me to realize that the more well-adjusted hunters in my circle had found something to bridge winter with spring and still keep them in the hunt and on the land: rabbit hunting.

Technically, the state has only one type of rabbit and two manner of hare. The eastern cottontail rabbit (Sylvilagus floridanus) is the one most folks are familiar with, as it is exceptionally abundant. If the cottontail were a condiment, it would be ketchup.

The snowshoe hare (Lepus americanus) packs a bit more meat, fat and flavor and is a touch bigger. It seems to have an unspoken agreement with the cottontail regarding overlapping territory, mostly sticking to the northern part of the state. They favor Canada and the American mountain ranges otherwise.

Last and least is the white-tailed jackrabbit (Lepus townsendii), released in Wisconsin in the early 1900s to give a boost to the hunt. Several other types of hares not found here actually fall under the name jackrabbit, reportedly bestowed by American humorist Mark Twain. Having seen their enormous ears, he created the portmanteau out of “jackass” (the donkey) and “rabbit.”

The white-tailed jackrabbit started disappearing from Wisconsin around the 1950s, and no state hunters have reported seeing one in a good while. But that doesn’t mean they’re not still out there; it wouldn’t be the first time nature has surprised us.

If you do see one, don’t shoot! Hunting this protected species is prohibited. Call the DNR and go buy a lottery ticket — in that order.

In Wisconsin, you can hunt cottontail rabbits from September or October (depending on whether you are in the northern or southern zone) through the end of February, with a daily three-rabbit bag limit. The snowshoe hare is fair game year-round, with an unlimited bag limit. With either species, you’ve got potential for a pretty good hunt.

A good sized snowshoe will feed one person with some leftovers. My brother-in-law is of the opinion that any time after November is better.

“They’ve got some good fat on them because of the cold, as good as a rabbit will get at least, and so they taste better,” Joe has advised me. Thanks to the uptick in cooking shows over the last 20 years, even a kid will tell you fat equals flavor.

If your love of hunting involves a stand, a rifle and a wait, rabbit hunting is not for you. Thick brush, deadfalls and closely packed tangled groundcover are their safest spots, and that’s where you have to flush them out.

The cover keeps them hidden from predators. Nearly everything that flies with talons in Wisconsin’s skies is hunting them, too. That said, they are fun to flush, and it makes for a great day out in Wisconsin’s thinner woods and rushes.

Skinning a rabbit is one of the most fluid and gratifying affairs at the conclusion of any hunt out there. Three cuts is all it takes: at breast, head and hips. Break off the legs at the knee joints, remove the guts from the heart to the entrails, and you’ve got an animal you can easily cut up into back legs and haunches, forelegs and shoulders, and saddle, for whatever style you wish to cook them.

“The Joy of Cooking,” that endless resource of American cookery by Irma S. Rombauer (charmingly first published in 1936 as “The Joy of Cooking:  A Compilation of Reliable Recipes with a Casual Culinary Chat”) has a fantastic illustration of how to skin and clean a rabbit under its section on game.

A caution though: Check the liver every time. Tularemia, otherwise known as rabbit fever, is present if the liver is spotted with white or entirely white. It is nothing to mess with and easily transferable to humans. For this reason, a lot of hunters skinning rabbits now heed the advice and wear latex gloves.

A general rule in the kitchen is to cook rabbit like you would chicken with one difference:  Always leave the bones in, unless you are making a stew.  The meat will reward you with more flavor, and it holds together better.

Joe prefers rabbit in a stew, the most famous being hasenpfeffer, which came into vogue with Wisconsin’s influx of Germans in the mid-1800s.  Another option is lightly breaded and fried.

The former is how I first had rabbit, courtesy of Joe’s cast iron. Succulent and toothsome, the rabbit ate well all the way through. Not a dry or knotted bite in the whole meal.

As the days grow shorter and colder with winter officially just ’round the bend, a good bunch of our hunters may find their cabin fever cure out on our state’s exceptional land with a rabbit hunt. Many will stretch their heels through thicket and wood the better part of the winter.

I hope more hunters will add to that number. Getting out for rabbit is a great partner hunt and helps fill in the weeks until the warmth returns again.

Morning Chores [EXIT DNR] has a tremendous selection of recipes to prepare rabbit once you’ve hunted them. For my part, I enjoy a simple browning in a screaming hot pan, which is then put in an oven to cook. Serve accented by a few vegetables and a side dish. A wild rabbit will have a clean “of the land” flavor, and I am an advocate of accentuating what nature has given us.

Salt and pepper to taste