Organizer recalls being center stage for the making of a movement

Activism for protecting America’s environment has deep roots in our history. Starting in the 1890s, for example, establishment of our now-sweeping system of national forests began to offset destruction of forests and watersheds caused by widespread industrial logging. Today, America’s national forests now cover more than 188 million acres, including over 1.5 million acres in northern Wisconsin’s Chequamegon-Nicolet National Forest.

Similarly, protection for our system of national parks, including Wisconsin’s Apostle Islands National Lakeshore, and national wildlife refuges such as the one in Horicon have a long history. Like forest protection, this, too, was the result of persistent work by conservation organizations including the Sierra Club, founded in 1892 with the leadership of Wisconsin-reared John Muir, and the Wilderness Society, dating to 1935.

Despite this good work, restoring the quality of America’s polluted air and water, cleaning up toxic wastes, preserving free-flowing wild and scenic rivers and other goals have been a work in progress.

Americans were shocked in 1962 by the book “Silent Spring,” Rachel Carson’s alarming vision of skies without birds due to widespread use of DDT and other persistent pesticides. The massive 1969 oil spill in California’s Santa Barbara Channel was another wakeup call, and Ohio’s Cuyahoga River catching fire — literally — grabbed headlines that same year.

Spurred by the concern and sometimes anger of their constituents about the deteriorating environment, elected officials increasingly focused on these needs.

Nelson at the forefront

Nelson was born in 1916 in Clear Lake, Wisconsin, and came to public office as a devoted environmentalist. His attitude was captured in his assertion that “the economy is a wholly owned subsidiary of the environment, not the other way around,” from his 2002 book “Beyond Earth Day: Fulfilling the Promise” (UW Press). 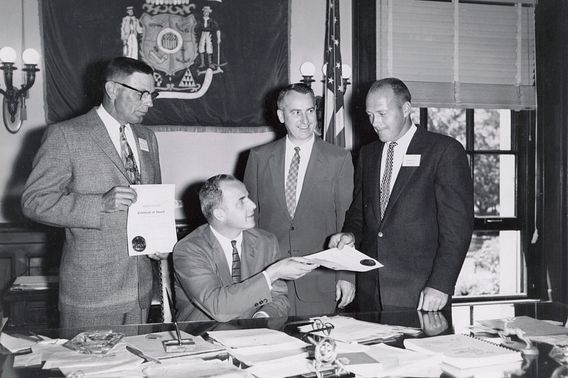 Nelson earned a national reputation as the conservation governor, espousing popular reforms to clean up waterways, protect natural resources, create green jobs and bolster the state’s recreation infrastructure. Once elected to the U.S. Senate, he spent years trying to rally his fellow senators around his environmental agenda.

Sen. Nelson also was an early opponent of the war in Vietnam. He saw and participated in the outpouring of anti-war protests in the streets and on campuses across Wisconsin and the nation.

A seed was planted: Why not harness this same kind of grassroots protest for environmental protection? Even as the Vietnam War protests continued, Nelson hatched the idea to adapt an anti-war tool — the “teach-in” — to the environmental cause.

The first Vietnam War teach-in had been held at the University of Michigan in March 1965. Led by anthropology professor Marshall Sahlins and some 50 other faculty members, it took the form of a teaching strike.

“They say we are neglecting our responsibilities as teachers. Let’s show them how responsible we feel,” Sahlins explained at the time, as reported in the New York Times Magazine. “Instead of teaching out, we’ll teach in — all night.”

The event engaged some 3,500 faculty and students in debates, lectures, musical events and films.

Four years later, with that model in mind and Nelson’s own calls for an environmental teach-in playing in the media, a group of University of Michigan students, faculty and community members gathered to plan a campus event on the environment.

The idea took off, blossoming into a four-day affair at the Michigan campus and spilling over into the city of Ann Arbor.  As one of the co-chairs of the event, I didn’t sleep those four days … but, oh, what a high!

The kick-off rally, with Sen. Nelson as one of the speakers, overflowed the vast basketball arena. It opened with the Chicago cast of the hit musical “Hair” singing their anthem, “Aquarius.” Entertainers Gordon Lightfoot and Arthur Godfrey also participated that night.

Over the four days, every university department sponsored events — such as the first national gathering of environmental law experts at the Law School. There were events in the community and Ann Arbor public schools.

At the outset, as we were first planning the Michigan teach-in, my work for wilderness preservation took me to Capitol Hill to lobby Congress (which eventually became my career). While there, I walked into Sen. Nelson’s office — the first student to show up and announce we were mobilizing for just the kind of environmental teach-in Nelson was beginning to promote.

To my surprise, I found myself serving on the board of Environmental Teach-in Inc., the nonprofit Nelson founded to coordinate the national teach-in effort.

Coordinate? Ha! Our small student staff had to run to keep up with the mushrooming teach-in movement that swept across America — and beyond.

“Earth Day worked because of the spontaneous response at the grassroots level,” Nelson later noted. “We had neither the time nor resources to organize 20 million demonstrators and the thousands of schools and local communities that participated. That was the remarkable thing about Earth Day. It organized itself.”

The national effort focused on what became the first Earth Day — April 22, 1970. At the University of Michigan, that date did not work for us, as our university was on a trimester academic calendar, meaning we were heading for finals by late April. Thus, we planned our teach-in for March.

It became the focus of intense national media attention, and we took our role as an “Earth Day model” very seriously. We held events to share our teach-in ideas and plans with students from other campuses far and wide.

What did the first Earth Day mean? It meant that environmental protection, far more broadly defined than just forest and park protection, had arrived for good.

In Ann Arbor, for example, growing out of the teach-in, community activists formed the Ecology Center to promote safe and healthy environments and created a recycling program that has since grown into a wholly owned green business. In the 1990s, the Ecology Center created one of the largest land preservation programs in the country with thousands of acres protected in southeast Michigan.

On the federal level, the sense of vast public support for the environment led to the passage of the National Environmental Policy Act, the establishment of the Environmental Protection Agency, enactment of the Clean Air Act and the Clean Water Act, and a slew of court decisions that assured these laws would be vigorously enforced.

Environmental activism was here to stay.