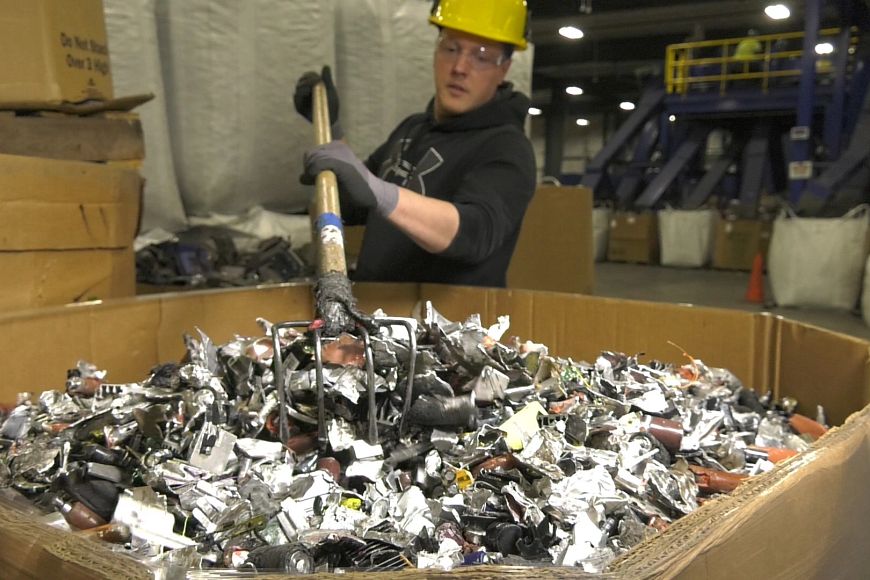 ©DNR FILESAt Dynamic Lifecycle Innovations in Onalaska, aluminum is prepared for shipment after being separated from electronics using a high-tech shredder.

Recycling electronics also has kept hazardous materials, such as lead, mercury, cadmium and brominated flame retardants out of landfills and the environment.

Worry about where these hazardous materials could end up if not managed properly was one of the main motivations behind electronics recycling laws passed in Wisconsin
and several other states just over a decade ago.

PATH TO THE PROGRAM

In the early 2000s, the United States was heading toward a switch from analog to digital signals for over-the-air TV broadcasts. While this change meant improved picture quality and more local broadcast channels, it also meant a lot of picture-tube TVs would become obsolete without special equipment to capture the new signals.

As flat-panel, high-definition TVs became more affordable, many experts anticipated the digital transition (eventually completed in June 2009) would result in the disposal of millions of old TVs. There was a problem, though: The cathode ray tubes in those TVs contained several pounds of lead embedded in the glass — enough to make most of them hazardous waste.

In anticipation of this transition, and in response to the growing use and disposal of electronics overall, government regulators, electronics industry representatives, recyclers and other stakeholders began discussing national legislation to improve and provide funding for electronics recycling.

In Wisconsin, state Sen. Mark Miller worked with stakeholders and legislative colleagues for several years before successfully passing a bill in 2009. The law used a product stewardship approach — in which manufacturers, retailers, consumers, collectors, recyclers and governments share responsibility for ensuring safe end-of-life management — to set up the electronics collection and recycling program now known as E-Cycle Wisconsin, which began on Jan. 1, 2010.

Under the law, manufacturers of TVs, computers, monitors and desktop printers must register with the Department of Natural Resources the brands they sell to Wisconsin households and schools. Those manufacturers also must recycle a target weight of electronics each year based on their sales.

Manufacturers contract with state-registered collectors and recyclers to meet their targets. The law also banned landfill and incinerator disposal of many electronics beginning on Sept. 1, 2010.

E-Cycle Wisconsin grew rapidly in its first few years. Electronics collectors registered 309 permanent collection sites and one-day collection events in January 2010, a measure of the infrastructure that existed when the law passed.

By 2013, the number of sites and events had increased 120%, to 681. Wisconsin’s program was a national leader in collection sites and pounds collected per capita.

Several high-tech recyclers in the state expanded to meet the increased volume of electronics coming from Wisconsin and nearby states with similar laws. These were outcomes the proponents of the electronics recycling law had hoped for when advocating for the legislation.

In the program’s early years, many collectors offered free recycling to consumers for most items. Markets for recyclable materials harvested from electronics were strong, and sales of these materials together with manufacturer funding covered the majority of collection, transportation and recycling costs.

By 2015, the economics of the program had shifted. While manufacturer funding remained relatively steady, recyclers’ costs increased. Many passed these costs along to collection sites — which, in turn, began charging consumers more.

A major driver was changing markets for leaded glass from cathode ray tubes. For several years, the main outlets for this material had been lead smelters and “glass-to-glass” recycling that produced new cathode ray tubes, largely for overseas markets. With that technology on its way out, the world’s remaining glass-to-glass furnaces began charging to accept glass, then shut their doors.

New outlets emerged — primarily for use of the glass in European and South American ceramics production — but recyclers had to pay more to send glass there. With TVs and monitors consistently making up two-thirds of weight collected under E-Cycle Wisconsin, this had a major impact on overall costs. 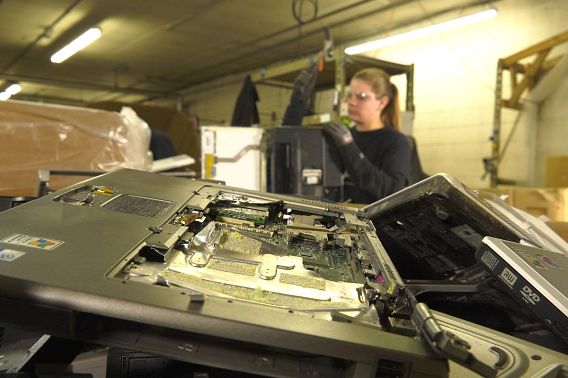 When first-generation flat-panel TVs and monitors began entering the recycling stream, the news wasn’t much better.

Devices produced during the first decade or so of the new technology were lit by thin, mercury-containing fluorescent tubes. The devices were time-consuming to dismantle by hand and carried a risk of mercury exposure if recycling workers broke the fragile tubes. Plus, the displays didn’t have enough valuable commodities inside to cover the high labor costs.

These higher costs, along with lower values for commodities recovered from electronics, meant payments from manufacturers often didn’t cover the full costs of collecting, transporting and recycling electronics under E-Cycle Wisconsin.

The higher costs led some collection sites to stop taking electronics or to switch from permanent sites to a couple of one-day events per year. From 2013 to 2019, the number of sites and events registered with E-Cycle Wisconsin dropped 25%.

In that same period, the percentage of collectors charging consumers fees for at least some items rose from 63% to 91%, and the percentage accepting some electronics for free dropped from 70% to 51%.

Despite these challenges, Wisconsin’s electronics recycling infrastructure remains much stronger today than in 2010. The program has had at least one registered collection site in every county, and the number of collection sites has remained steady at just over 500 for the last few years, about 200 more than at the start of the program.

As Wisconsin’s recyclers have grown, an increasing share of electronics collected under the program has been processed in-state, supporting jobs at several large facilities.

The changing nature of electronics has brought many benefits to consumers. Manufacturers have greatly reduced the use of hazardous materials in electronics and have reduced overall material use through innovations that have made products like TVs and cellphones lighter.

Tradeoffs have come with these changes, though, such as components glued into devices like tablets and cellphones, making them harder to repair or dismantle. Small, powerful lithium batteries have made portable electronics ubiquitous, but these batteries can easily catch fire if damaged during the recycling process or if thrown into the trash and crushed in trucks, transfer stations or landfills.

Ensuring battery-containing devices are safely managed adds costs and risk to the waste industry as a whole.

In addition, recyclers have had to be innovative to handle the increasing amount of personal data stored on smartphones, tablets, computers and even TVs — not to mention “smart home” devices, fitness trackers and similar items that didn’t exist in 2009. High-tech recyclers have strict procedures to ensure data-containing devices are managed securely, with hard drives and other data storage wiped or destroyed.

The DNR has conducted a series of statewide household surveys to understand Wisconsin residents’ behavior and questions when it comes to electronics recycling. The surveys have shown that most households are storing electronics they no longer use.

In the most recent survey, in fall 2018, 74% of responding households had at least one TV, computer, tablet or cellphone they no longer used. In total, there were an estimated 9.3 million unused devices in Wisconsin households — still plenty of electronics to recycle.

Among survey respondents, the most common reasons for not recycling electronics were not knowing where or how to do so, cost, lack of convenient locations and concerns about data security.

The DNR’s E-Cycle Wisconsin team is working with stakeholders to address these barriers, including annual outreach campaigns to increase e-cycling awareness and maintaining an online list of collection sites and events.  An online mapping feature has been added, along with information about manufacturer mail-back and trade-in programs, often free to consumers.

The DNR also works with stakeholders to identify program challenges and recommend solutions in an annual report to the Legislature and governor.

In its first 10 years, Wisconsin’s electronics recycling law created a strong framework of shared responsibility that, with help from all stakeholders, will ensure E-Cycle Wisconsin can meet the challenges for decades to come.

Sarah Murray has been the DNR’s E-Cycle Wisconsin program coordinator since 2010.

Here are things to think about when you need to recycle electronics.

Have a plan for your data.

Does your device still have value?

You may need to pay a fee.

What are your recycling options?