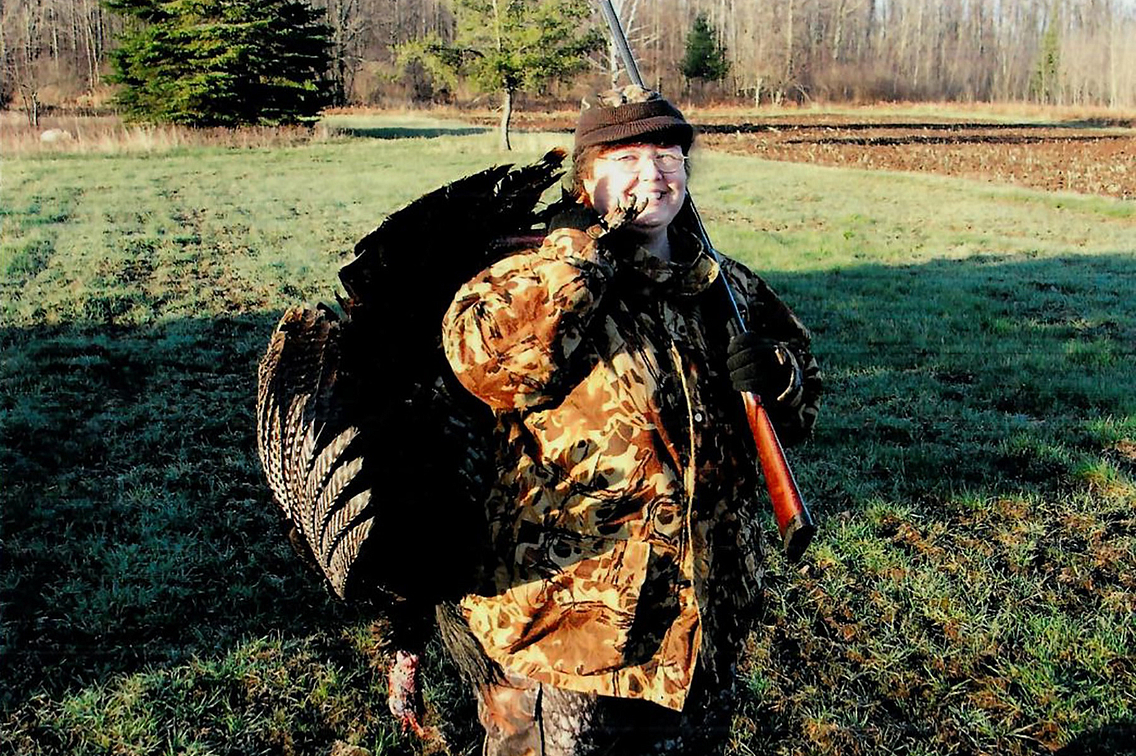 Lori Feind's patience gave way to pandemonium when she and her husband celebrated bagging a 20-pound gobbler.
© KEVIN FEIND

The spring turkey season, which took place in April and May, marked my 31st year of turkey hunting in Wisconsin. Over that time, I've made many very fond memories, but few can compare to the morning I called in a Nebagamon Creek gobbler for my wife, Lori.

To fully understand the significance of this hunt, which happened in 2008, we first need to learn a little about the hunter. Lori is my wife of 26 years and has always been very supportive of my turkey hunting adventures. But in most cases, mobility issues have meant she can't be a hunter herself.

Lori has had multiple surgeries on her legs and knees, so most turkey hunting is simply not possible for her. She can't walk through the woods or go up and down hills. Sitting against the base of a tree also is not possible or would be very painful for her.

Therefore, to get her out turkey hunting, I had to find a place where I could put her in a chair in a blind. The location had to be level and easily accessible yet provide some likelihood of calling in a turkey.

One day, I was talking to a landowner over breakfast at a small cafe in Lake Nebagamon in Douglas County. He had property near the Brule River State Forest where he said he commonly saw turkeys. There was vehicle access to within 100 yards of a food plot, and he gave me permission to scout the area.

Upon arriving at the property, I bumped a jake, a hen and a long-bearded gobbler from the food plot. I noticed a spruce tree in the middle of the field that provided significant shade and made a good spot to set up a blind with two chairs, less obvious to incoming gobblers. Decoys could be placed in a very natural-looking area of the field.

The next day, we were excited for the morning hunt. The forecast called for calm winds, a low of 44 degrees and clear skies. Some might know that as a "bluebird morning." The landowner provided me with a key for the gated driveway on the property, assuring we'd have no conflicts from others.

We arrived well before light, parked the van out of sight of the blind and got Lori seated. I placed two hens and a jake decoy in an area Lori could cover comfortably. As it started to get light, we listened for the first morning gobble.

Time passed, and there was no gobble ... anywhere. More time passed, and still no gobble. I whispered to Lori that I was going to start with some light tree yelps to see if I'd get a response. I started with my trusty Quaker Boy Rite Touch slate and waited. Nothing. I tried again. Still nothing.

It was time to change calling techniques to see if it would trigger a response. Experience has taught me that if a hunter can mimic a high degree of excitement from a couple of hens at once, it can trigger a reluctant gobbler to cut loose.

With that in mind, I positioned my mouth diaphragm and loudly mixed cutting and yelping with both the diaphragm and the slate at the same time. Much to my surprise, a thunderous gobble erupted from about a quarter mile north of us. I smiled and whispered to Lori, "Bingo!"

He had heard me and I had his attention. With additional calling, I could tell he was walking back and forth, east and west, several times, but wasn't getting any closer. I realized he was on the other side of a stream and didn't want to cross it.

Normally, if hunting by myself, I'd move on him and get across the stream, but Lori didn't have the ability to be mobile. I called a few more times and each time, the bird gobbled back.

I decided to go silent on the bird. Sometimes this tactic causes the bird to come closer, although sometimes it results in the bird losing interest. It was a gamble I had to take. I forced myself not to call for 20 minutes, checking my watch to make sure I waited that long.

After the 20 minutes, I resumed with some medium volume yelps on my mouth diaphragm. Much to my pleasure, the bird not only gobbled back, but was much closer! Either it had flown across the stream or another gobbler had heard our conversation and was on his way. At this point, it didn't matter — the bird gobbled and he was coming.

Patience, then a precise shot

I was positioned off Lori's right shoulder and was peeking through a small window to the north. I could see about 60 yards to where a lane led out of the food plot. A gobble erupted again and this time it sounded so close I was surprised I couldn't see him through my peephole.

Lori got her shotgun ready. Suddenly, I heard the gobbler spit and drum and I peeked out the window to see where he was. I could see him in full strut about 40 yards away. I whispered to Lori and she shouldered the shotgun, keeping the muzzle from breaking the outline of the blind's window.

The bird was magnificent. He strutted closer, never dropping his tail fan, walking 8 feet, stopping, then walking 8 more. It was obvious when Lori could finally see the strutting bird, for her eyes got the size of saucers and she started to breathe rapidly. The bird circled around the jake decoy at 19 yards. Lori raised her gun and lined up the sights.

I whispered, "You can shoot him any time, he's in range." She clicked off the safety and sat there aiming but didn't pull the trigger. This was the moment of truth. Time stood still. Was she going to shoot? Would she flinch? Would she keep the sights lined up?

The bird was now facing off with the jake decoy at 17 yards and slightly quartering away from us. Still she didn't fire. Finally, the bird dropped his tail to half strut and stretched his neck to attack the decoy.

At that moment, the gun roared. I could see the shot column hit the neck of the gobbler about an inch above the greater caruncles. An absolute perfect shot! I was thrilled and overcome with excitement.

After clearing the shotgun and placing it in a safe place, we went crazy. There were hugs and kisses, complete pandemonium in our blind. I was overflowing with pride and joy.

When I asked Lori why she took so long to shoot, she calmly said, "I didn't want to damage the beautiful tail fan and I knew you'd want to mount it for me."

After several minutes, I exited the blind to retrieve the bird. It was a very respectable 3-year-old gobbler, with a 10½-inch beard and weighing about 20 pounds.

Since then, Lori's legs have only gotten worse so that likely will be her only gobbler. But it was an incredible hunt, made possible by a kind Lake Nebagamon landowner.

As expected, the tail fan and beard grace our living room wall.