CAPTURED THROUGH AN UP-CLOSE CAMERA LENS, DRAGONFLIES AND DAMSELFLIES DAZZLE WITH THEIR BEAUTY 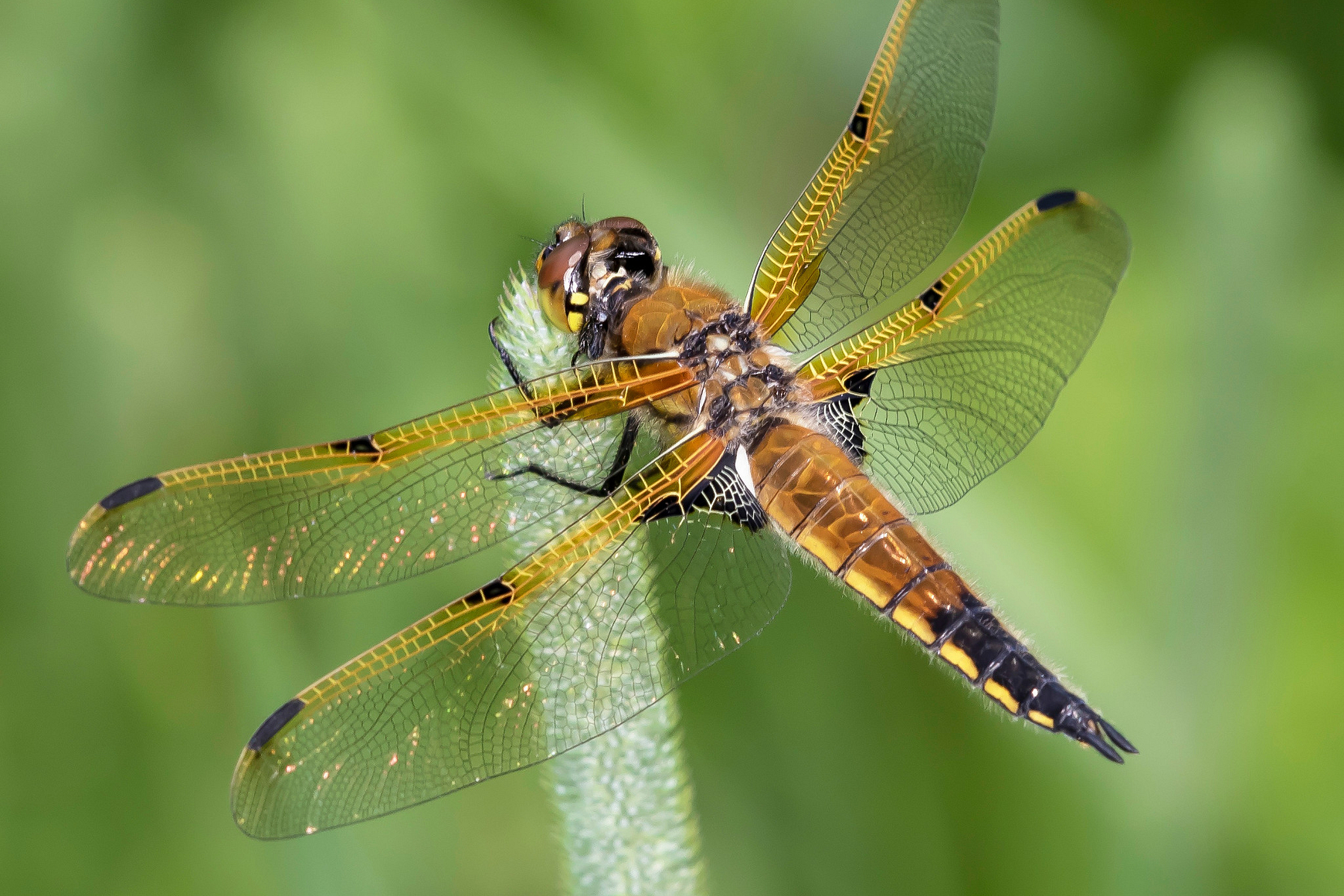 The four-spotted skimmer is one of more than 165 dragonfly and damselfly species in Wisconsin.
© KURT HUEBNER

I became interested in nature close-up and in macro photography many years ago. With the arrival of digital cameras, my interest really took off. Images suddenly were cheap to make and they offered immediate gratification — or frustration.

My first subjects were largely unusual insects and wildflowers and sometimes a few birds. Then, about four years ago, I was taking photographs in my front yard when I noticed a very small and colorful damselfly in the low grass. It was cooperative and allowed me to take several images.

I didn't have a close-up lens on my camera so I didn't expect to see too much when I downloaded one of the images on my computer. I was right; the image was pretty bad, not sharply focused and very small. I enlarged the image on my screen anyway and was immediately amazed by the delicate structure and colors.

I needed to know more about the damselfly, so I searched the web looking for a match. I found it, identifying the damselfly as an Eastern forktail, one of the most common damselflies in Wisconsin.

That was my initial contact with damselflies and the catalyst to beginning haphazard wandering near ponds, lakes and ditches looking for other species. I began to pay closer attention to what I was seeing.

Despite my initial random efforts, I started to find additional species. By the end of the following season, I had found 30 or so different species of dragonflies and damselflies — odonates.

Building a knowledge base 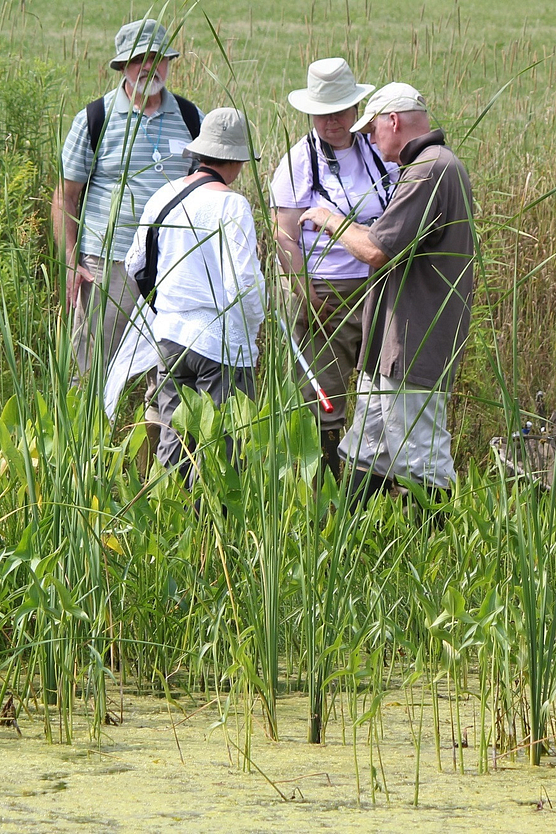 Citizen scientists can learn to identify odonates by joining groups such as the Wisconsin Odonata Survey and the Wisconsin Dragonfly Society.
© DNR FILES

Of course, I had no idea what the odonate species names were, so I began looking for references and found three books that covered Wisconsin odonates: "Dragonflies of the North Woods," by Kurt Mead; "Dragonflies of Wisconsin," by Karl Legler et al.; and "Damselflies of the North Woods," by Bob DuBois, a research scientist and odonate expert for the Department of Natural Resources.

Importantly, as a member of the WDS, I became aware of the Wisconsin Odonata Survey, which has been administered by DuBois to monitor odonates throughout Wisconsin. By recording my finds and sharing images with the WOS, I could continue my lifelong interest in science and become a contributing citizen scientist. Without the WOS and its massive database, my level of knowledge never would have progressed as it did.

I am still a neophyte and doubt I will ever become an expert, but over the past four years I've rapidly gained a base knowledge of Wisconsin odonates. I am now able to search for and find many common and uncommon species without much effort.

Through the help of the WDS and its members, I have come to know about odonates' habitats, species range, habits and when during the season certain species will appear. On any warm and sunny day with low wind, you will find me walking alongside and wading in rivers, streams, lakes and ponds — even drainage ditches and dried-up puddles — looking for common and less familiar species.

While I am far from an expert, I do spend more than half of the days from mid-April to mid-October in the field searching for and photographing odonates. My pursuit of dragonflies and damselflies will definitely continue — my 6-year-old granddaughter has called it my "obsession." 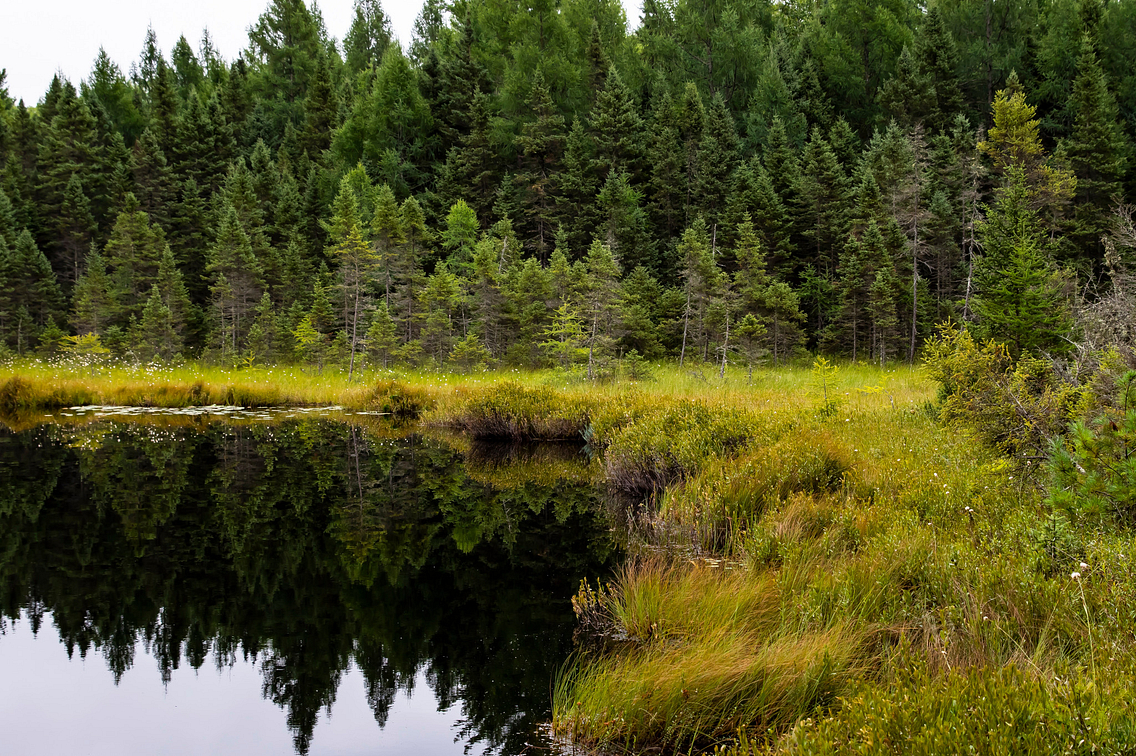 Odonates are most likely found in wetland habitats.
© KURT HUEBNER

Dragonflies and damselflies, in general, can be easily found in many water habitats and in fields near or even distant from a water source. They may be perched on vegetation, on the ground or patrolling their territory. (While both are in the order Odonata, dragonflies and damselflies have differences — most notably including eyes, body shape, wing shape and wing position.)

Odonates do need water to breed and develop. In fact, most of their lifetime, months to years, is spent hidden as voracious nymphs in their water habitats where they hunt insects, small fish, tadpoles and even other nymphs.

Once the nymphs are mature, they crawl onto shore vegetation early in the morning to avoid predation and, with much effort, emerge from their hard exoskeletons. About an hour later, when the body and wings are inflated and hardened, they fly off and become the dragonflies and damselflies we see flying around our neighborhoods, fields and waters.

They are not fully mature when they leave the nymph state and typically will fly inland to feed on insects, some small, others as large as butterflies. Sometimes, they even prey on other dragonflies and damselflies.

This days-long feeding frenzy allows odonates to reach sexual maturity. Once they have matured, they return to their water habitat where the males may define a territory and seek or wait for a mate.

This complex process involves the passing of reproductive material to the female that will allow for fertilization of the many eggs she carries. The female then deposits the eggs into the proper water environment where the eggs can develop into nymphs. And the cycle continues.

Ready for their close-up

Photographing odonates can be a challenge. Some are an inch long while others are a little more than three inches, with every size in between. Many are just not willing to sit still for a photograph. Many have a limited area where they are found within the state, and they don't all show up at the same time during summer.

Given all those things and other considerations, photographing odonates is nonetheless a great deal of fun. It is largely a solo project — too many cooks spoil the pot. Any wet spot or fields near water are perfect sites to get started. If they are immature, odonates can be found in more distant fields as well. 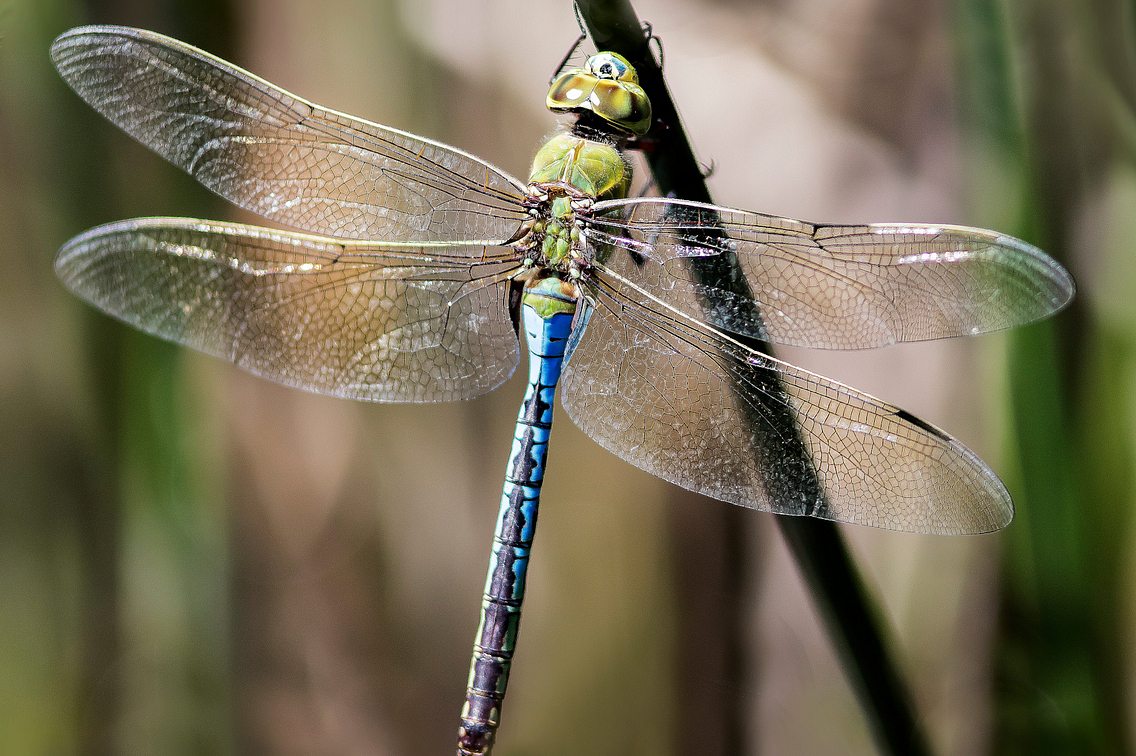 As its name implies, the common green darner dragonfly is widespread in the state.
© KURT HUEBNER

If you become more than casually interested, reference books will help you find locations, habitats and species range. Also visit the DNR's Wisconsin Odonata Survey pages and the Wisconsin Dragonfly Society on Facebook.

To date, I have been able to find and photograph 121 of Wisconsin's roughly 165 species of dragonflies and damselflies. Macro photography can be expensive but, really, any camera with close-focus capability will do. You can start with a good point-and-shoot camera, just try not to use the on-camera flash. I have even seen some good cell-phone images.

My technique is fairly simple: Get low and go slow. Walking up to a potential subject will usually flush the edgy odonate. I always get as low as I can and try for a side view. If the odonate allows, I shoot as many different angles as I can.

Do plan to miss a lot of shots. Most of my images are more diagonal, meaning I was looking somewhat down on my subject from a not-too-intrusive distance. I have found if I get too close and try to fill the viewfinder, I may cut off part of the subject. Stay back a little and center the image in the viewfinder. Recomposition and cropping can then be done with any image-processing software.

I usually start shooting as soon as I see the odonate and keep shooting as I carefully move closer. As you might guess, how close you can get is determined by the subject. Take multiple shots if possible. Images are cheap and, in the end, any image is better than no image. Overall, knowledge, patience and practice are the keys to successful odonate photography.

Kurt Huebner lives in the town of Vernon, near Mukwonago. He is a retired U.S. Air Force senior master sergeant, natural science college educator and clinical laboratory scientist who now spends much of his time as a nature photographer and citizen scientist.

There are more than 165 species of dragonflies and damselflies known to occur in the state and the Wisconsin Odonata Survey works to keep track of them all. With the help of volunteers, the WOS documents populations of odonates to increase knowledge of where species are found and what habitat is required. Dragonfly and damselfly species are pinpointed by identifying adults, nymphs and exuviae — the cast skins left behind when nymphs transform into adults.

The WOS, coordinated by Department of Natural Resources research scientist Bob DuBois, is one of several statewide surveys in the DNR's Aquatic and Terrestrial Resources Inventory program. It also is part of the Wisconsin Citizen-based Monitoring Network, which facilitates monitoring projects. 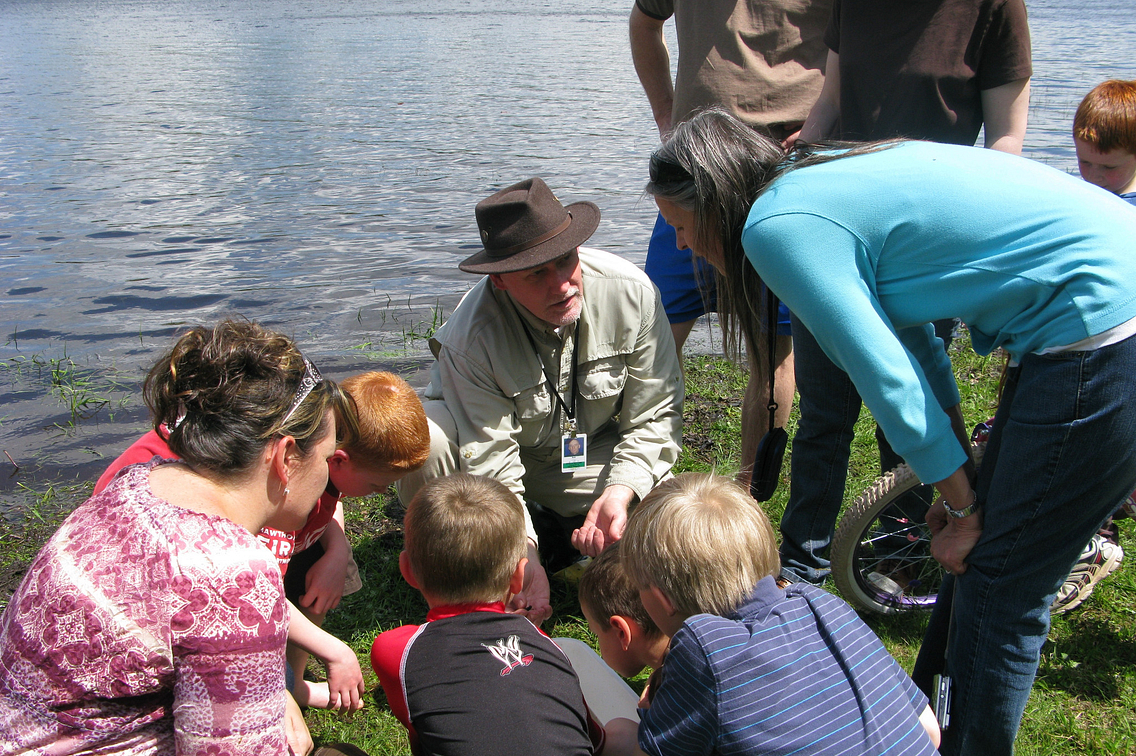 Volunteers are always needed to help with the WOS. Helpful "tools of the trade" can include close-focusing binoculars and an aerial net. Hip boots, waders or knee-high boots will help keep you dry around the wet habitats where odonates occur. To document finds, a digital camera with macro capabilities is best.

A good field guide to identify species is important. The "Color Guide to Dragonflies of Wisconsin" by Karl Legler, Dorothy Legler and Dave Westover is expanded to include all species in the state. Other field guides are listed on the WOS website under "Resources."

Additional information found on the website includes tips for recognizing species; process and rules for collecting specimens when needed (some species can be identified only under magnification); best times to survey (June and July are prime months); habitats to target; and tips for accessing public and private lands.

ABOUT THE CAMERA SETTINGS

Photographer Kurt Huebner has won several awards for his odonate images and has had photos published in the news journal of the Dragonfly Society of the Americas, among other places. He spends much of each summer photographing odonates throughout Wisconsin. The dragonfly and damselfly macro images seen on these pages are all of common or fairly common species and all were taken at in-state locations.

For those interested in the more technical aspects of Huebner's photography, he provides these details:

"My DSLR (digital single-lens reflex) camera system is a Canon 7D Mark II with a Canon 180mm f3.5 macro lens and I use a Canon Macro Twin Lite MT-26EX RT flash. I shoot raw files in manual mode, though I do use autofocus because of aging eyes. I tend to center my odonate subjects so the camera is set for spot metering and a central focus point.

"Initially, the f-stop is set to f8 and adjusted as needed based on light and depth-of-field needs. The ISO is set to 400. I always use the external flash and because of that my shutter speed is set to 1/250 of a second."