A first-rate record of participation 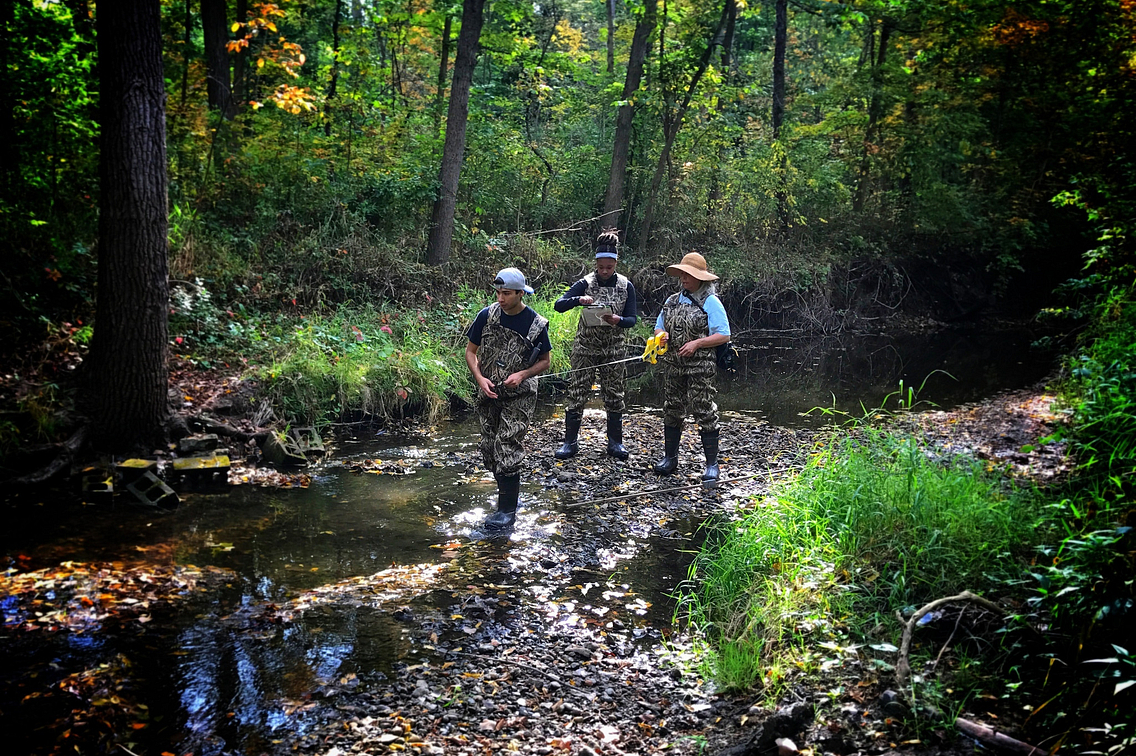 In 1900, what eventually would become the National Audubon Society proposed a new twist on a classic holiday tradition. Rather than competing to harvest as many birds as possible on Christmas Day, a popular 1800s pastime, people instead were encouraged to count the birds they saw. With that notion, the Christmas Bird Count, one of the longest-running citizen science projects in the country, was created!

Here in Wisconsin, one intrepid soul in North Freedom participated in that very first count, reporting 12 bird species including northern bobwhite, hairy woodpecker and brown creeper. The 1900 count is one of the earliest examples of Wisconsin's long and proud involvement in citizen-based monitoring.

This type of monitoring is a subset of citizen science, which is when members of the public volunteer to participate in scientific research and monitoring. Citizen-based monitoring deals specifically with the long-term monitoring of plants, animals and ecosystems.

From the humble beginnings of a single Christmas Bird Count participant in 1900, Wisconsin citizen-based monitoring has expanded beyond what anyone could have imagined back then. Over a century of dedication from volunteers, professional scientists, agency staff and others eventually led to the 2004 creation of the Wisconsin Citizen-based Monitoring Network to support such efforts. The WCBM Network makes Wisconsin relatively unique in offering such a widespread, solid infrastructure to support volunteer monitoring of our natural resources.

After the initial Christmas Bird Count in 1900, the count was somewhat slow to catch on and suffered from particularly low participation during both World War I and II. However, by 1950 volunteers were participating at 17 different Wisconsin locations. That number ballooned to 96 in 2010 and a staggering 111 in 2017, with multiple volunteers at most locations.

By the mid-20th century, when the Christmas Bird Count was beginning to take off, monarch fever arrived in Wisconsin. Volunteers tagged butterflies and mailed reports of the annual monarch migration to Fred Urquhart, a leading monarch scientist, who partnered with volunteers to discover where monarchs went when they flew south each winter. Some of those reports were included in Urquhart's 1960 book, "The Monarch Butterfly" (University of Toronto Press).

In 1958, L.L. Griewisch of Green Bay reported "a very poor year," and Mrs. K.W. Ruge of Jefferson wrote, "I perceived but an approximate dozen Monarchs all summer. I didn't see the first one till about August." In other years, though, monarchs were present in spectacular numbers. Ralph Washichek of Wauwatosa reported seeing 2,000 monarchs flying south over Milwaukee's airport, Mitchell Field, one September.

In the 1950s, it was clear monarchs made a long journey each year. A 1955 monarch tagged in Milwaukee was found just three days later in Texas, more than 800 miles away! We now know monarchs travel all the way to Mexico each fall, but that wasn't confirmed until 1976.

As the 20th century progressed, more and more citizen-based monitoring projects emerged. Wisconsinites participated in the inaugural North American Breeding Bird Survey in 1966, and the Annual Midwest Crane Count was created and launched in Wisconsin in 1976.

After that, Wisconsin-specific projects began to emerge, with LoonWatch (1978), the Wisconsin Frog and Toad Survey (1981), and the Citizen Lake Monitoring Network (1986) among some of the most prominent and successful. The final decade of the century saw volunteers joining the Volunteer Carnivore Tracking Program (1995), the first Wisconsin Breeding Bird Atlas (1995), Water Action Volunteers stream monitoring (1996), and the Monarch Larva Monitoring Project (1996).

Many of the citizen-based monitoring projects in the state were created by the Department of Natural Resources or by joint DNR/UW-Extension efforts. A few, such as LoonWatch and the Monarch Larva Monitoring Project, were coordinated by universities, and a handful, like the Christmas Bird Count, by nonprofit organizations.

Finding a home for monitoring projects

Riveredge Nature Center in Ozaukee County was one of the first nature centers to participate in volunteer monitoring when it joined the Christmas Bird Count in 1969. In the 1990s, the Urban Ecology Center in Milwaukee emerged as a citizen-based monitoring powerhouse, and in 1999 North Lakeland Discovery Center in Vilas County followed suit, coordinating volunteer efforts of birds, rare mammals, lake levels and more. Outagamie County's Mosquito Hill Nature Center also became involved by coordinating volunteer monitoring of monarch butterflies, birds and, of course, mosquitoes! 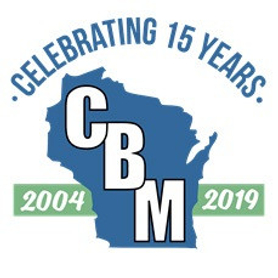 In 2003, Beaver Creek Reserve in Eau Claire County doubled down on its investment in citizen-based monitoring programming and broke ground on its Citizen Science Center, an entire facility devoted to involving the local community in authentic scientific research and monitoring.

The explosive growth in citizen-based monitoring and its clear utility for research, conservation management, regulation and education led DNR staff to explore ways to link together the many organizations and individuals involved in citizen-based monitoring. Partnering with organizations such as UW-Extension, Wisconsin Wetlands Association, Beaver Creek Reserve and more, they organized and held the first Wisconsin Citizen-based Monitoring Conference in 2004, which was attended by over 120 people.

One of the major takeaways from the conference was the need for a statewide infrastructure to facilitate networking opportunities, the sharing of resources, funding and communication within Wisconsin's growing citizen-based monitoring community. Attendees decided the next step should be to form a statewide group — and the WCBM Network was born!

Opportunities on the rise

One of the most popular resources continues to be WCBM Network conferences, the eighth of which was held in 2018. The conferences offer an opportunity for anyone involved in citizen-based monitoring to share their work, learn from others, network and attend training.

These opportunities encourage increased partnership and participation within the WCBM Network. One participant who attended training for the Monarch Larva Monitoring Project wrote, "I attended the butterfly workshop, enjoyed and understood the presentation, walked out with the equipment I needed, and I'm ready to do my citizen science!"

In the 15 years since it formed, the WCBM Network has steadily expanded its offerings of resources and programming. At the same time, many exciting new projects have emerged. Since 2004, DNR has increased its collection of statewide monitoring projects, partnering with volunteers to monitor native mussels, bats, turtles, rare plants and more.

"I am amazed at the growth in interest in citizen-based monitoring since this program was initiated 15 years ago," says Nancy Turyk, who was involved in the initial formation of the WCBM Network and is a member of its advisory council. "Not only are more people involved in collecting data, they are collecting data on a broader range of species and habitats."

Advances in technology have allowed new types of DNR projects to emerge. In 2016, Snapshot Wisconsin launched, creating a statewide network of trail cameras with wildlife images that can be viewed and identified online by people across the world. Jennifer Stenglein, a DNR research scientist, says the project already has collected a staggering 25 million photos, which are being put to good use.

In 2018, DNR began a different type of photography project when it created the Bumble Bee Brigade, in which volunteers use digital photography to monitor the state's native bumble bees. All photos and observation data are submitted online, where they can be easily accessed by project coordinators and will eventually be available to the public.

UW-Extension also has increased its involvement in citizen-based monitoring. 2013 saw the creation of the Wisconsin Master Naturalist Program, which trains and supports volunteers who engage in environmental education, stewardship and citizen science. A year later, the Wisconsin First Detector Network was formed, empowering volunteers to monitor and manage invasive species.

Over the years, the contributions of volunteers to citizen-based monitoring efforts have been significant. Monitoring data are routinely used in scientific research and publication, such as when Monarch Larva Monitoring Project observations were used to estimate the number of milkweed plants needed to produce a single migratory monarch butterfly (29) or when observations from the website eBird were used to investigate aggressive behaviors between crows and ravens.

Citizen-based monitoring data also contribute to decisions to award federal protection to species under the Endangered Species Act. This was the case with the rusty patched bumble bee, some of the last remaining populations of which can be found right here in Wisconsin. 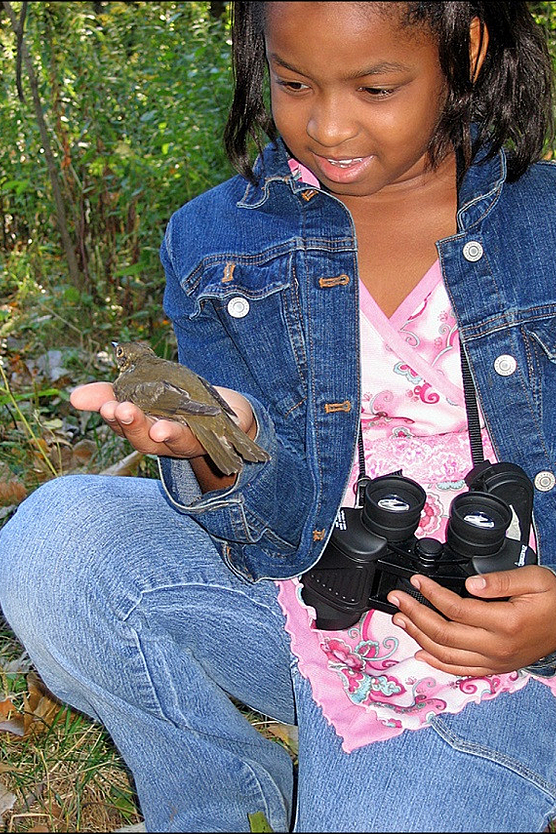 It's not uncommon to find young people volunteering alongside their parents and grandparents. © URBAN ECOLOGY CENTER

Participating in citizen-based monitoring can have a profound effect on the volunteers as well. In addition to being immersed in nature and learning new science and natural history skills, many find it a great way to socialize.

Barbara Duerksen, a long-time birder who received an award for Outstanding Achievement in Citizen-based Monitoring from the WCBM Network, enjoys spending time with other birders. "I enjoy talking with people about birds," she said. "It's fun to hear the volunteers' reports after they come in from the early morning sandhill crane count — they are so excited about what they saw in the marsh."

Volunteers often meet new people or connect with friends and family members while monitoring. It's not uncommon to find young people volunteering alongside their parents and grandparents or to meet spouses who volunteer together.

Some volunteers have even been known to woo potential partners on a romantic nighttime survey. One dedicated Wisconsin Frog and Toad Survey volunteer invited someone out to monitor frog calls as a first date — and ended up marrying her!

We can't guarantee that all volunteers will find romance during citizen-based monitoring, but it is a wonderful way to connect with nature, fellow volunteers and your community.

Help celebrate the Wisconsin Citizen-based Monitoring Network's 15th anniversary by making 2019 the most successful year to date! Pledge to volunteer your time with citizen-based monitoring and contribute to the understanding and protection of our plants, animals and ecosystems. In this 15th anniversary year, volunteers also can share monitoring memories on social media with the hashtag #WCBMat15. Learn more and find ways to help at Wisconsin Citizen-based Monitoring Network.