Story by Beth Norquist and photos by Karen Blodgett 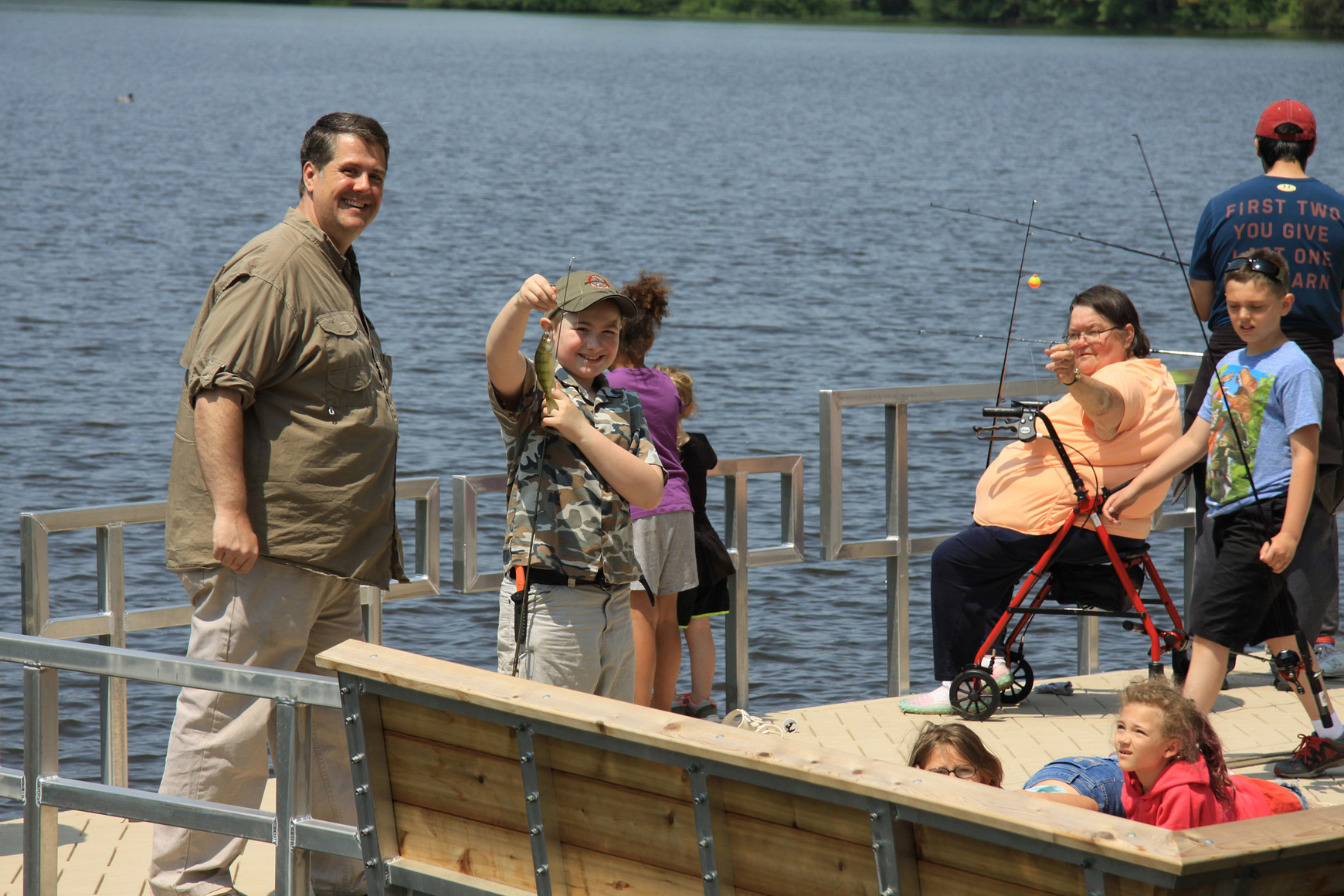 A new fishing pier in Chippewa Falls opened in June and provides accessible fishing opportunity to nearly 50 anglers at a time.

The three had met to evaluate a "Learn to Fish" event the groups put on in Chippewa Falls. Although the event was very good, the fishing was not.

This started a discussion on shore fishing opportunities around Chippewa Falls. Where could people have a positive experience, especially if they had mobility issues?

Deeney said he is asked this question more than any other out in the field. And in that instance, he didn't have an answer.

Deeney eventually transferred out of the area, now working out of DNR's Eau Claire Service Center, and Beach also took a new job elsewhere. That left Bakken to work on the issue of accessible fishing in Chippewa Falls.

Around the same time, a local nonprofit called Special Friends Inc. expressed a desire to create a fishing spot for members. SFI president Donna Loew said the group has about 200 members with differing abilities, cognitively and physically, including a few dozen who love to fish together.

Lack of a spot to accommodate them meant these anglers often had to drive long distances to find a good fishing location and were limited in how often they could hold outings. Loew said members needed: adequate parking with easy passage to the fishing area, a large enough area to accommodate larger groups, and the chance to catch a fish — at least once in a while.

Loew approached Dick Hebert, director of Parks, Recreation and Forestry for Chippewa Falls, and he put her in touch with Bakken. By that time, Bakken also had heard from Katy Plendl, activities director at the Wisconsin Veterans Home at Chippewa Falls, who expressed the same interest in an accessible fishing area.

In the spring of 2014, a steering committee named Fish Chippewa! was formed with a motto of "Access for All!" The committee includes a local DNR warden — after Deeney, it was Bryan Harrenstein and currently is Kevin Christorf.

The committee soon homed in on a 15-acre parcel of land with 400 feet of frontage on Glen Loch Flowage on the north side of Chippewa Falls. The property was donated to the city in 1990 by Jean Erickson, designated for "park purposes." It was named Erickson Park but remained undeveloped — until now!

After many discussions, partner meetings and assistance from the DNR to help with grant funding, the project grew from a simple shore fishing facility to a full-blown park. It features an accessible boat launch, canoe and kayak launch, picnic areas, pavilions, play areas and trails to a bridge connecting to popular Irvine Park.

And there's fishing — plenty of it — from an accessible pier at the park, now open for visitors. The pier has ramps connecting to where it juts out in the flowage giving people of all abilities access to fishing. Just what area anglers needed.

Beth Norquist is a grant specialist and Karen Blodgett is a program and policy analyst, both in the DNR's Eau Claire Service Center. The two helped work on the Chippewa Falls accessible fishing project. Ron Bakken of Fish Chippewa! contributed to this story.

The Fish Chippewa! accessible fishing project cost an estimated $2.3 million, funded through generous community support and matching grant funding. After $1.2 million was raised via a capital campaign, the city applied for and received grants totaling $1,119,429.

For more on the Fish Chippewa! project, go to Erickson Park Capital Campaign.