Taking on a tiny invasive 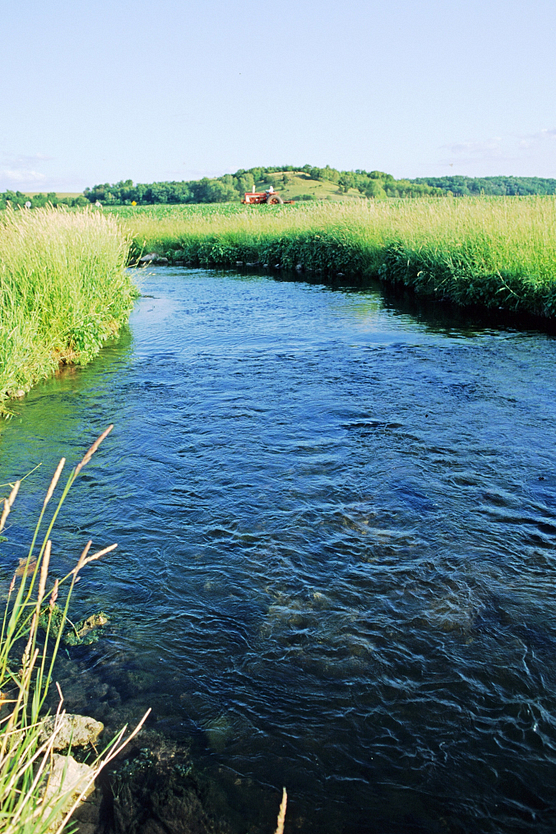 Black Earth Creek in western Dane County was identified as having the invasive New Zealand mudsnail as early as 2012, while nearby Brewery Creek joined the list just last year. © DNR FILES

Editor's note: When it comes to aquatic invasive species, fighting even the smallest invaders can require a big effort. But when many hands pitch in to help, the results are an important step in the right direction.

Those are among the lessons recently learned by young volunteer Monroe Durand of Middleton. Monroe, 14, was part of a group of volunteers who first discovered the invasive New Zealand mudsnail in Dane County's Brewery Creek in 2018. He also was at the forefront when many of those same volunteers wanted to help do something about it.

Monroe took a lead role in organizing an event to build Wader Wash Stations to be placed at spots along Brewery Creek and nearby Black Earth Creek, another known location for New Zealand mudsnails. These stations are designed to be used by those exiting the waterways to remove mudsnails so they can't be transferred to other waters.

Monroe's enthusiasm for the project garnered praise from others involved in the effort, including Natalie Dutack from the River Alliance of Wisconsin (wisconsinrivers.org). Dutack is the aquatic invasive species and watershed groups manager for River Alliance, an advocacy group for state waterways.

"His enthusiasm for preventing the spread of invasive species was clear," Dutack said of Monroe, who enlisted the help of his Boy Scout troop and others for the AIS battle.

"He surveyed the condition and presence of previously built stations, discovering that many were damaged or missing. He also helped promote the (building) event and taught our volunteers about mudsnails. His help was invaluable."

But what about Monroe? Let's hear in his own words how he helped — and will continue to — in the fight against this tiny but potentially destructive invasive species. 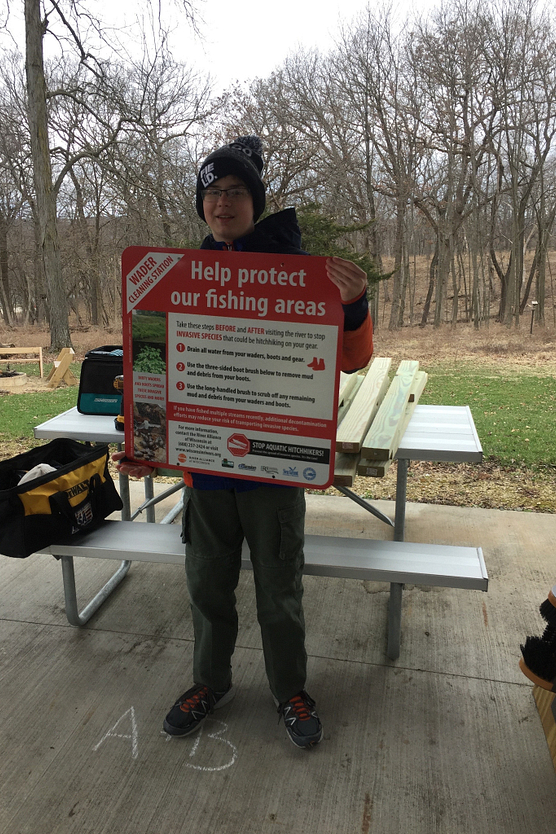 New Zealand mudsnails were discovered in Brewery Creek on Snapshot Day in August 2018. Snapshot Day is a large event of citizen scientists that takes place across the state. Volunteers are taught how to search for invasive species in lakes and rivers, and then report any potential invaders.

I was part of the group of volunteers who discovered mudsnails in Brewery Creek. We had surveyed a couple of other sites around Cross Plains and had not found any invaders.

We arrived at our final location and dipped the net into the water and lifted about 100 to 200 mudsnails out of the water. We put a couple of the mudsnails into a zip-top bag and it was sent off by the DNR for DNA testing, which verified they were indeed the invasive New Zealand mudsnails.

Without the efforts of citizen scientists, we may not have discovered the New Zealand mudsnails in Brewery Creek until it was too late to try to keep them from spreading. Citizen science is an important tool we have in the fight against aquatic invasive species.

"Citizen scientists are our early detectors in the fight against aquatic invasive species," said Natalie Dutack of the River Alliance of Wisconsin. "Whether they paddle, fish or enjoy a hike along the shore, many people have been gathering data for years, just by doing what they love.

"Now, on Snapshot Day, we provide a venue, training and a bit of fun so we can help empower the community to become stewards of the waters they love. They, in turn, provide invaluable information to the DNR, landowners, local governments and other entities working to protect the watershed."

After Snapshot Day, a broad coalition began the planning of a Wader Wash Station work day, including the River Alliance, Southwest Badger Resource Conservation and Development, the DNR and many other groups.

I found that almost every station was damaged or washed away and that there were many other locations in need of boot-scrubbing stations. Bobbi Peckarsky, a UW-Madison biology professor emeritus and member of the Black Earth Creek Watershed Association, recommended where to put additional stations.

After the survey, we needed to plan how we would build Wader Wash Stations. Fortunately, Natalie had found original plans and Chuck Patrick, a River Alliance volunteer, updated the plans. It is always useful to have an engineer in a group!

Natalie's dad, Charles Dutack, and Natalie obtained and prepared the wood to make station kits for later assembly. My role then was to get people to attend the building event, which was scheduled for mid-April. 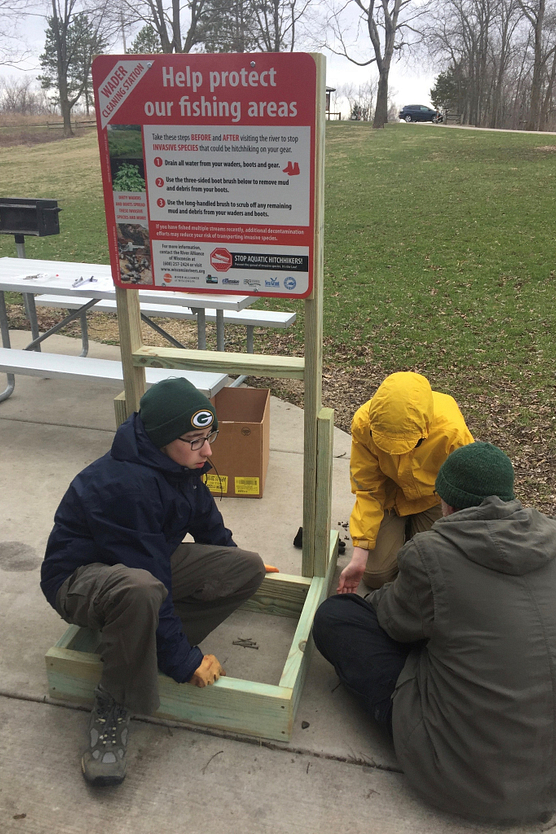 About 20 volunteers including local Boy Scouts worked to build "Wader Wash Stations" that were installed along Brewery Creek and Black Earth Creek to help prevent the spread of New Zealand musdsnails. © BARTLETT DURAND

Happily, about 20 volunteers showed up and we were able to assemble nine new boot-scrubbing stations in about an hour. We then drove the assembled stations to their locations along Black Earth Creek and Brewery Creek, where the DNR would later anchor them into the ground. The Wader Wash Stations were strategically placed at locations where people are known to exit the creek.

Now, Cross Plains Boy Scout Troop 87 will be "adopting" the five boot-scrubbing stations located in Cross Plains. The troop will routinely monitor and repair the stations as needed.

If you're fishing or wading into creeks in this area, you can find a Wader Wash Station by looking for the large red and white sign. You can use the stations by simply stepping into the "scrusher" and moving your boot back and forth. This will remove plants and mud from the cracks and crannies of your boots where mudsnails tend to hide.

Monroe Durand is a freshman at Middleton High School. He enjoys writing and playing viola and is passionate about protecting the environment.

ABOUT THE NEW ZEALAND MUDSNAIL

The New Zealand mudsnail is a tiny aquatic invasive species approximately one-eighth of an inch long. It is a primary consumer that grazes on algae and can reproduce asexually (as a clone), meaning only one mudsnail is needed to start a new population.

New Zealand mudsnails were first discovered in the United States in 1987 in the Snake River of Idaho and have since spread throughout the western U.S. and into the Great Lakes. In Wisconsin, this AIS was first found in Douglas County in 2005, with most verified populations now in western Dane County — especially in and around Black Earth Creek.

Although the full impact of the New Zealand mudsnail is not yet known, it is likely to compete directly with native grazers and could reduce this food source. Research also has shown that New Zealand mudsnails may not be a good food source themselves because some fish may avoid them while others may not be able to digest them, offering little to no energy compared to other common food items.

New Zealand mudsnails' small size means they can easily hitchhike on waterways via waders, fishing gear, watercraft and more. Wisconsin populations in Lake Superior's Duluth-Superior Harbor and Lake Michigan's Waukegan Harbor have not been observed as expanding, but the extent of the invasion in southwest Wisconsin is yet unknown. The DNR continues to monitor the distribution of this AIS and support actions to help prevent its spread.