My morning with the 'one-shot kid' 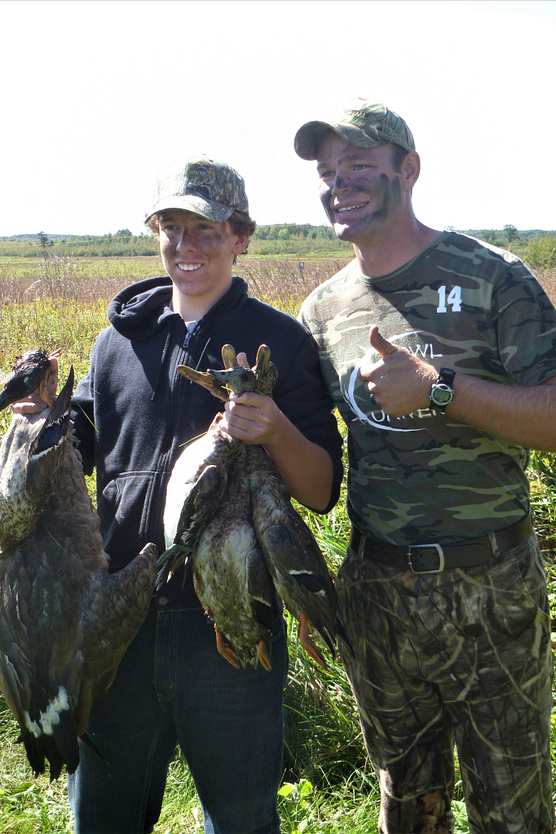 Story author Luke Fara, right, and his mentee, Jon, show off the day's harvest after a Learn to Hunt event at Mead Wildlife Area. © PATRICE EYERS

Waterfowl hunting is a passion that runs deep within my veins. I love hearing the soft laughing call of blue-winged teal on cool, crisp mornings or loud excited honks of geese taking off as they head to a nearby cornfield.

Watching and hearing the marsh come to life as the sun rises and crests across the horizon is a moment I cherish. Each morning may seem similar, but all are different — a difference in time, in temperature or weather. But most important are the people with whom you share the experience.

Sharing these moments with family and friends is priceless. However, youth involvement in the outdoors has diminished, particularly for waterfowl hunting, and it is important to pass on these experiences and associated feelings.

Promoting such opportunities has been a primary focus of the Department of Natural Resources, and a program called Learn to Hunt was developed to encourage hunter participation. Learn to Hunt opportunities are available for a variety of hunting experiences including deer, turkey, pheasant and waterfowl. It is the last type I was asked to mentor.

In 2010, the Mead Wildlife Area held its first Learn to Hunt waterfowl program and I was graciously asked to participate. I accepted the offer to be a mentor and hoped to provide a quality experience for my mentee.

Jon was the young man I was assigned to mentor, but commitments prevented me from meeting him during the initial field day. Luckily, other mentors assisted him at that required event, which occurred a week before the hunt.

The week of the hunt was filled with phone calls and we finally met the evening before the hunt to scout a location at Mead, northwest of Stevens Point. While scouting, we discussed our interests and experiences and talked about waterfowl hunting.

The scouting trip was enjoyable and I was able to pass on knowledge of what I look for when scouting and how it plays a role in planning for the hunt. Our anticipation grew as we watched hundreds of ducks fly into the spot we planned to hunt the next morning.

Ready for a beautiful show

That night, I was restless as I focused on making sure I had everything needed to create a memorable morning and a satisfying experience for Jon. I was anxious until Jon and his father met me at the parking lot in the wildlife area at zero-dark-thirty.

We heard the soft whistles of wood ducks and quacks of lonely hen mallards out in the marsh as the three of us walked down the dike toward the area we planned to hunt. The calling ducks calmed my nerves, as I knew the birds and the marsh were going to give us a beautiful show at daybreak. 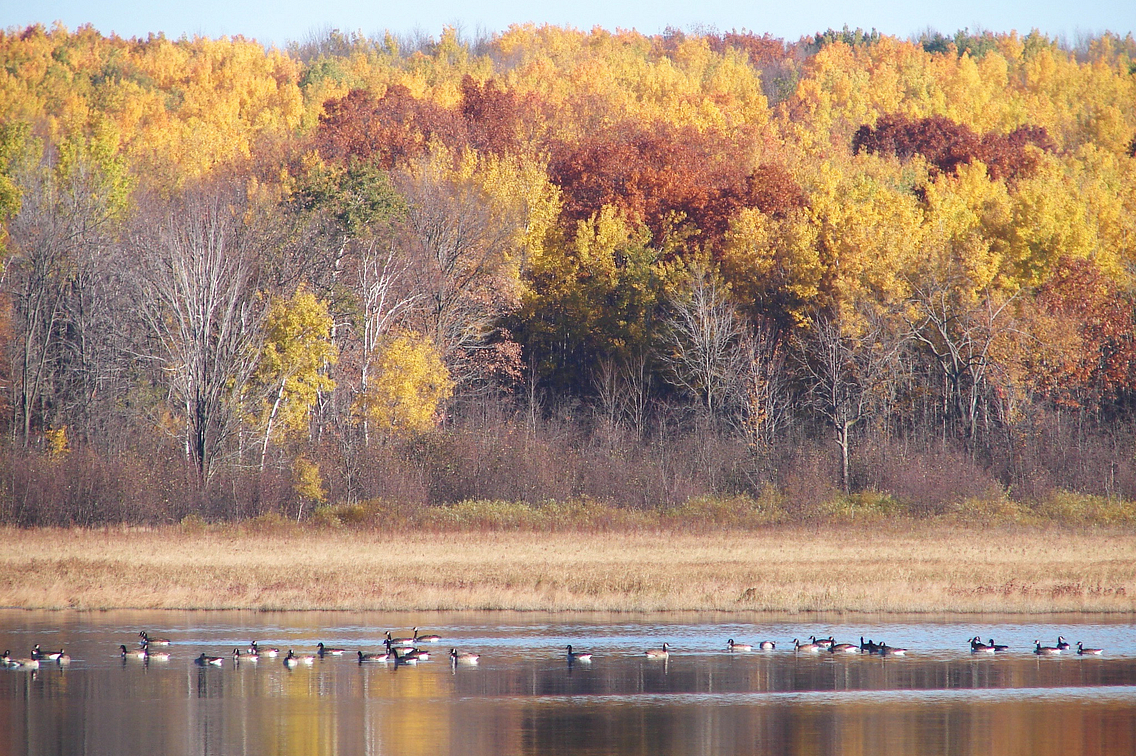 We set decoys from a canoe and many questions were asked, "Why set the mallards here and the geese over there?" I replied, "To simulate the family groups of the mallards in the hemi-marsh and the geese in the open water, just like the birds we saw last night."

The noise in the marsh grew as geese began to awaken and prepare for their morning flight to a nearby field. As dawn approached and shooting time drew near, small bird-like shadows turned into silhouettes and finally to unmistakable images of spry teal passing over the vegetation.

Finally, after seconds that felt like hours, shooting time arrived and Jon loaded his shotgun. Jon missed his first shot at a passing wood duck, but his hopes were high as it was early. A small group of blue-winged teal buzzed past so fast Jon didn't have time to think.

"Where did they come from?" he wondered. To which I replied, "I'm not sure. I didn't see them any sooner than you."

The flyby is something all waterfowl hunters experience. "It's all right — there will be others," I assured him.

Special memory on the marsh

At that moment, I caught a glimpse of three teal headed in our direction and told Jon to get ready. He had plenty of time and fired as they were settling into the decoys. Jon missed and the teal flew off, likely to be just a little more cautious at their next destination.

After the teal, a mallard winged into the decoys and Jon missed a third time. I could sense some tension and his dad asked, "Any shooting tips?"

The reality was, just like me when I was young, he was stopping his swing. I hadn't known an easy way to answer this question until a year or two earlier, when I heard a good way to explain it: "Act like you're painting the duck with spray paint and follow through just like you would if you were spray painting."

The sun was rising higher in the sky and mallards were flying steadily. Five mallards saw the decoys and started calling. I called back and the mallards locked their wings to begin descent.

As the ducks came closer, Jon began his left-to-right swing and fired at a drake. The bird felt the shock of the load and folded, hitting the water with a splash.

Jon was speechless, as was his father. Both were wide-eyed with amazement.

For Jon, I think shooting his first duck brought a feeling of gratifying achievement. For his dad, it was all about the pride he took in experiencing that moment with his son.

I retrieved the bird and the drake mallard I handed Jon was beautiful, even though it didn't yet sport its full colors. We were both elated.

The moment was captured in a great photo his father took, representing an even greater memory of handing down the traditions of waterfowl hunting.

One shot at a time 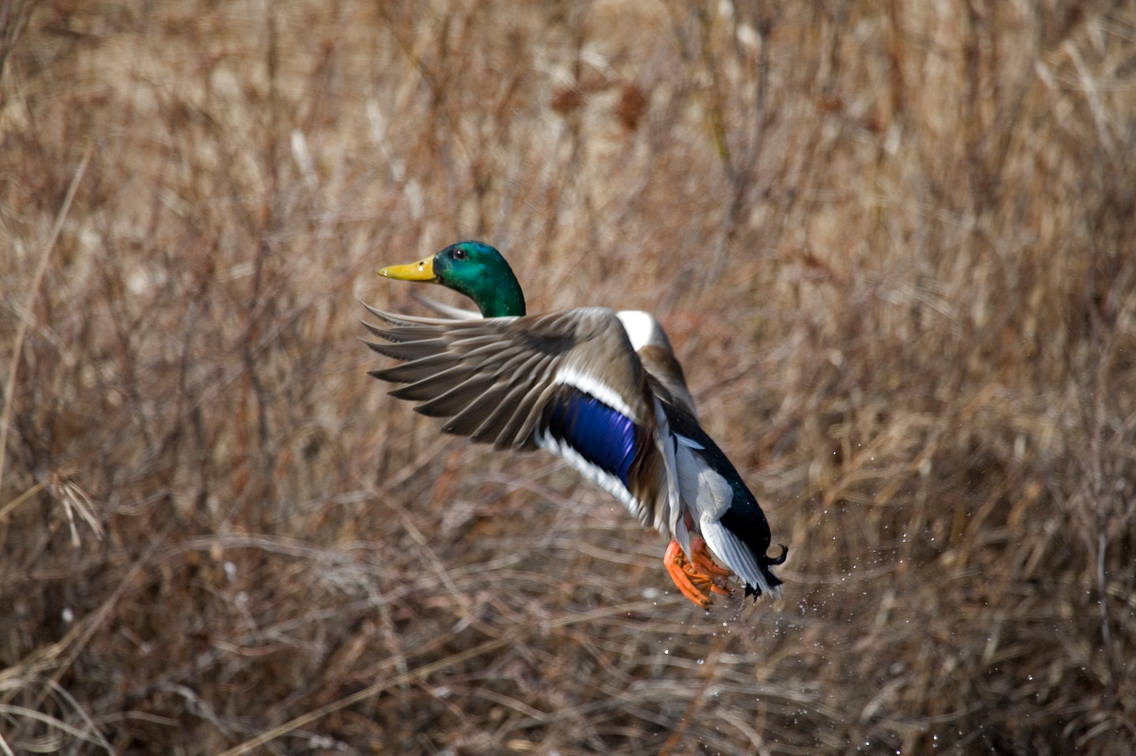 Wildlife is abundant at Mead, which is especially known for its avian species, and mallards are a popular take for waterfowl hunters. © SHANE RUCKER

Just then, a hen mallard came floating into the decoys and Jon connected on his second bird of the day. Upon retrieval, he was thrilled to see the bird was banded, as harvesting a banded bird is prestigious among many waterfowl hunters.

Jon could only harvest one hen mallard, so we had to be absolutely sure any additional mallards he targeted were drakes. Mallards were abundant that morning and we watched flocks come into and leave the decoy area unscathed.

With so many mallards, Jon was able to pick out and harvest two more drakes to finish his four-mallard limit. I'm not sure if my shooting advice helped, but it was easy to tell Jon's confidence was growing.

Around 10 a.m., Jon's father left the marsh to prepare lunch for the post-hunt festivities at the Mead visitor center. Since Jon had his mallard limit, he and I were able to discuss life and enjoy the mallards that visited our decoys.

Eventually, a drake American wigeon tried to sneak past us, but by then Jon was shooting too well and got his fifth duck of the morning. As the duck activity decreased, I asked Jon, "Do you want to stay 15 minutes to try and get another duck or goose, or would you like to get lunch?"

Jon paused for a moment and responded, "I'd like to stay out here a little longer." I would have said the same and was happy he chose to spend more time afield.

As our time dwindled, I heard the lower, long honk of a single goose. I started calling and saw the goose sailing toward us over the trees.

When the goose got closer, I lowered my head to conceal my face. A second later, I noticed Jon mounting his gun as the goose banked and committed to the decoys. Jon took his time and folded the bird with one shot.

I couldn't help but notice that Jon was shaking as I handed him the goose. It was great to see him so excited.

Jon, as it turned out, was comfortable shooting one shot at a time, going six for 11 that morning. As we walked out of the marsh, I couldn't help but think we had just created a memory that would last a lifetime. I know I will never forget my hunt with the "one-shot kid."

The day was a huge success, thanks to the time and effort the DNR and volunteer staff put into the Learn to Hunt program. That includes arranging the pre-hunt field day and locating quality mentors who truly enjoy not only waterfowl hunting, but the outdoors in general.

Seeing the young Learn to Hunt participants so enthusiastic after the event has given me hope the waterfowl hunting tradition will live on.

For information on Learn to Hunt opportunities coordinated by the DNR, check dnr.wi.gov, keywords "Learn to Hunt." The 2019 migratory bird hunting season is underway in Wisconsin. For complete season dates and regulations, including recent rule changes, as well as general waterfowl hunting and management information, check Waterfowl hunting. 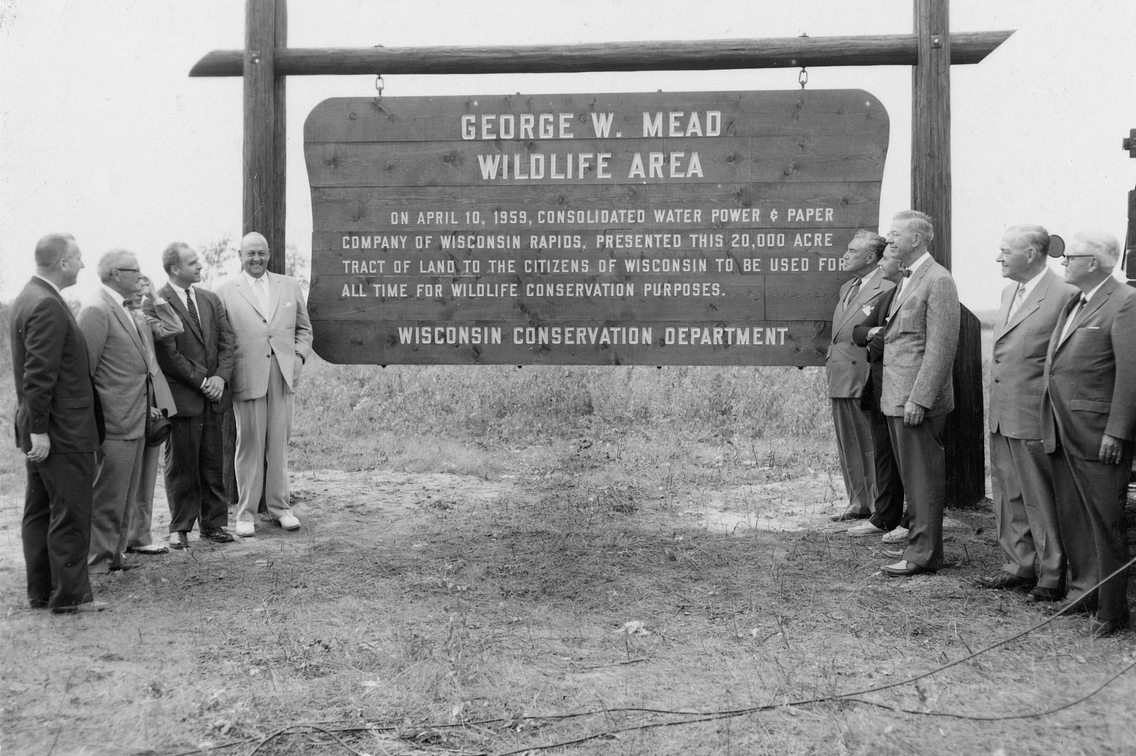 Gaylord Nelson, then governor of Wisconsin (fourth from left) attends an event at the George W. Mead Wildlife Area in August 1959 along with administrators from the Wisconsin Conservation Department. © STABER W. REESE

The George W. Mead Wildlife Area is just north of Highway 10 between Marshfield and Stevens Point. The land has a unique history of use by Native Americans, French fur traders, loggers and muck farmers.

On April 10, 1959, that history was preserved when Stanton W. Mead, then president of Consolidated Paper Co., donated 20,000 acres to the state of Wisconsin to enhance wildlife habitat and provide public recreational opportunities. The wildlife area was named for his father.

Over the last 60 years, the Mead Wildlife Area has grown to more than 33,000 acres of diverse habitat supporting a plethora of wildlife including wolves, coyotes, foxes, otters, deer, black bears and bobcats. It is particularly attractive to avian species and the National Audubon Society lists it as an Important Bird Area. More than 286 bird species have been recorded on the property, second only to Horicon Marsh among state wildlife areas.

Property management focuses on protecting species abundance and diversity by preserving and enhancing the requisite habitats. In addition, managers have placed an emphasis on public education and involvement. In 2005, the Stanton W. Mead Education and Visitor Center was built to support a variety of programming.

Individuals wishing to volunteer at Mead are encouraged to do so and can join the Friends of the Mead/McMillan Wildlife Areas. McMillan Marsh Wildlife Area is nearby to the west of Mead.

Or get involved through the DNR's Adopt a Fish and Wildlife Area program. The Mead has been adopted through the program by the Wisconsin Waterfowl Association. Involvement of both the Friends Group and the WWA provides voluntary and monetary support to Mead activities.