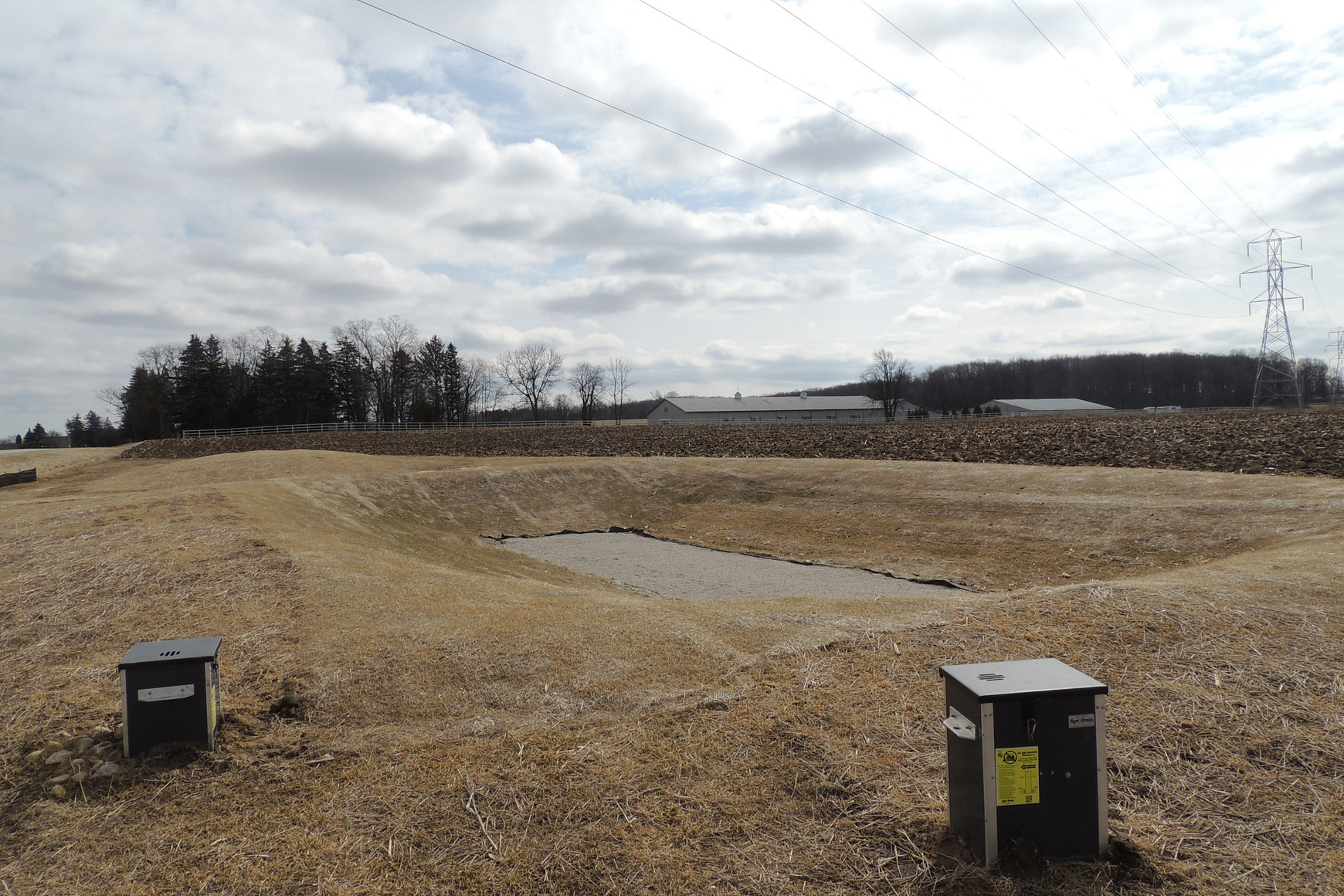 A new project in the Elkhart Lake watershed includes a filtration bed designed to remove phosphorus in water draining from surrounding agricultural fields before it enters the lake. © ELLIOT MEYER

Nestled in northwestern Sheboygan County, Elkhart Lake is the largest waterbody in a geographic region of Wisconsin known as the Kettle Moraine.

Carved from receding glaciers, the landscape is characterized by rolling hills and small pockets of sharp depressions, or kettles, now filled with water. The beautiful landscape around Elkhart Lake has attracted visitors to the area for more than a century.

Today, the lake's shores feature mostly private single-lot residential units, with the Osthoff Resort sitting prominently on the east bank. Although the surrounding lands are primarily agricultural, the lake experiences intense recreational use, especially from fishing and boating.

For more than a decade, the lake's water quality has been threatened by heavy phosphorus loadings. This has contributed to toxic algae blooms flaring up in parts of the lake in the summers.

Phosphorus is an essential nutrient for plants found in fertilizers, manure and septic waste. Excess phosphorus from farm fields and homes finds its way into the lake through surface and groundwater, which is then absorbed by aquatic plants. This can trigger unnatural algae blooms, which deplete the lake's oxygen and pose a serious threat to the lake's ecosystem.

According to DNR water quality monitoring, Elkhart Lake teeters within a moderately at-risk level. Between seasonal algae blooms and an increasing chance of low dissolved oxygen in deep water during the summers, protecting the lake from excess phosphorus has become a main priority for the Elkhart Lake community.

Opportunity for something new 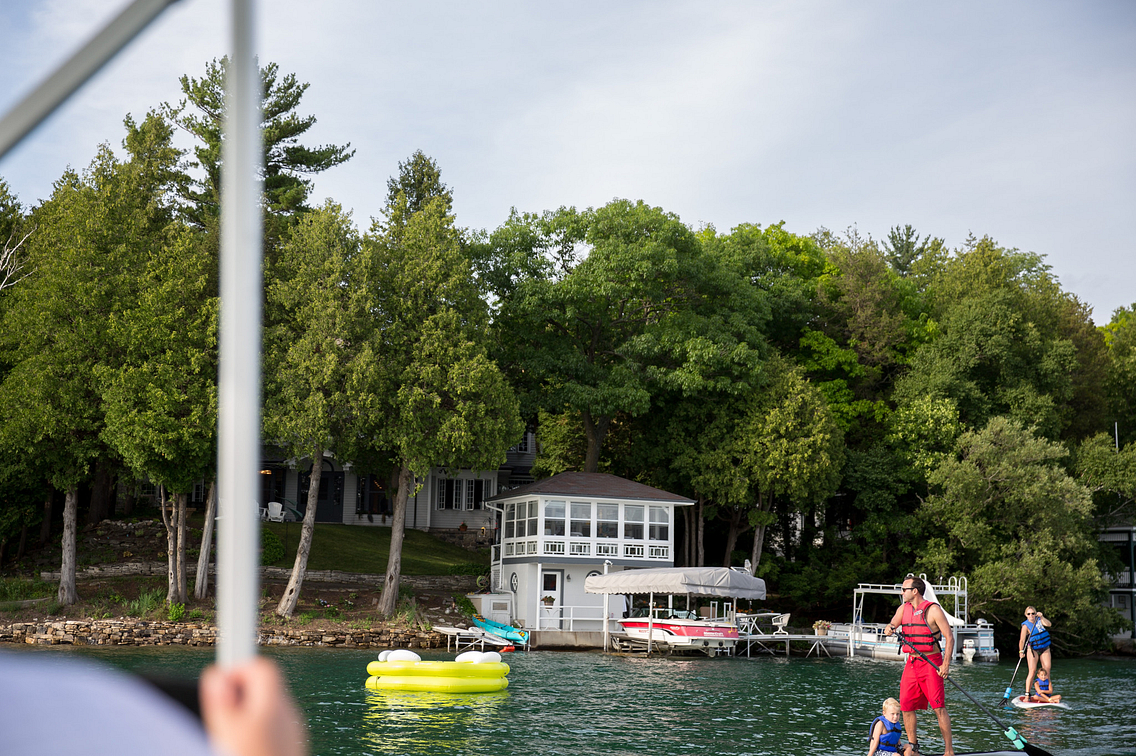 Elkhart Lake in Sheboygan County is a popular spot for recreational activities. © TRAVELWISCONSIN.COM

The Elkhart Lake Improvement Association, a citizen coalition that has helped maintain the lake since 1964, began looking for innovative solutions. ELIA partnered with the Sheboygan County Planning and Conservation Department, the DNR and local landowners to figure out where much of the phosphorus was originating.

"We know our actions now are essential to the long-term well-being of the lake."

As is common in this region of Wisconsin, many farm fields around Elkhart Lake have a dendritic network of subsurface drainage tiles beneath them. These underground branches connect the wetter areas of a field to a tile main that drains the excess water to a stable outlet nearby, usually a stream or pond.

The tiles help dry the fields faster, but they also directly channel subsurface water carrying concentrations of nutrients, including phosphorus, to nearby creeks that eventually flow into Elkhart Lake.

Sheboygan County PCD and ELIA saw this tile location as an opportunity to try something that had never been done before in Wisconsin: a phosphorus-reducing filtration bed connected to the drainage tiles upstream.

First used in a pilot project near Martha Lake in Minnesota, this new kind of filtration bed uses fine iron-enriched material, such as sand or slag, to remove dissolved phosphorus in the water. As water is funneled through the bed, the phosphorus bonds with the iron, effectively removing it from the water.

Finding a proper site location to install the filter bed, though, proved to be difficult. Much of the surrounding farmland has absentee ownership and farming is contracted.

Luckily, local landowner and farmer John Jens stepped up and became instrumental for the project. Jens agreed to lease half an acre of his farmland for the project site.

"It's great to have people like John in the county who are willing to do something like this," said Emily Stewart, former Sheboygan County PCD associate planner. "We were pretty limited with this area in general.

"For one thing, the elevation change is an issue, but for another . . . the farms in the area are pretty big, so there's only a handful of properties in the watershed that could be contributing to the problem." 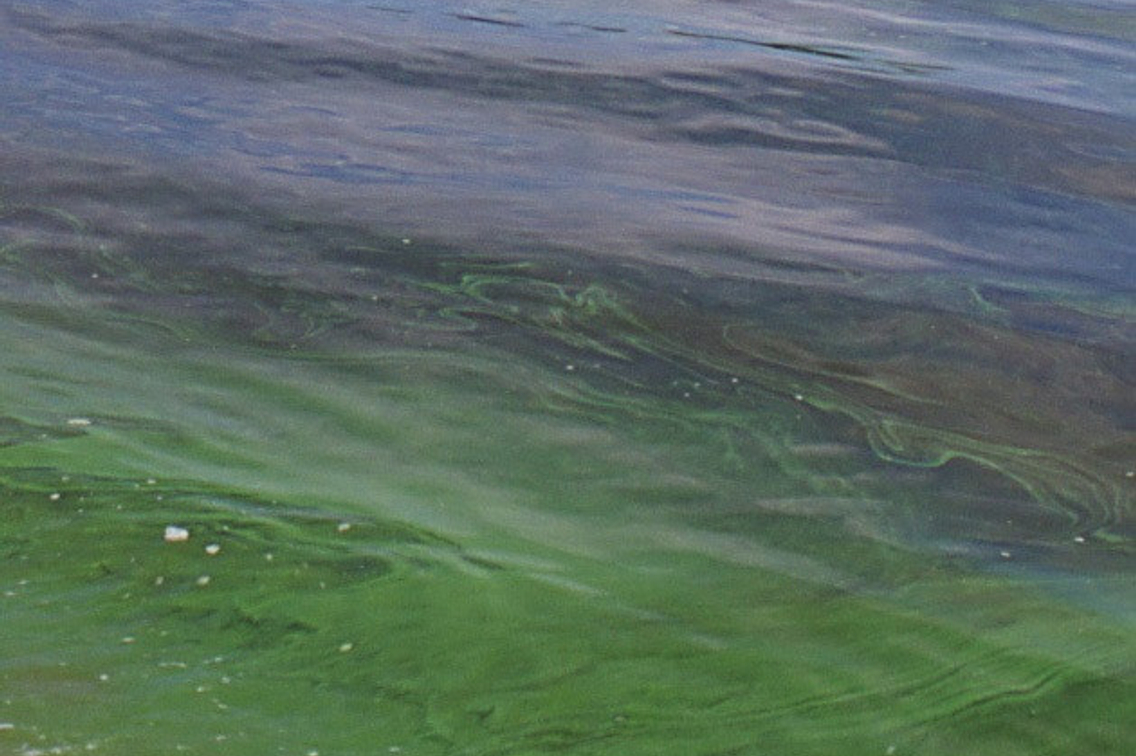 Blue-green algae, or cyanobacteria, can grow quickly in water bodies when temperatures are warm and the water is enriched with nutrients such as nitrogen and phosphorus. © DNR FILES

Installed in September 2017, the 1,200- cubic-feet filter was constructed at the edge of Jens' property. Connected to the underground concrete tile, a corrugated pipe diverts a portion of the water from the tile into the filter, with a control box managing the volume.

Some causes of the fluctuation can be attributed to seasonal variations such as rainfall and snowmelt, timing of the planting season and the design of the filter bed itself.

"This is a 10-year-long project, so we are not really in a position to draw any conclusion from the data we've collected," said Eric Fehlhaber, Sheboygan County PCD conservation manager. "We will continue to keep trying to balance and tweak the bugs out of our system and have contacted some UW researchers for advice and suggestions."

Although there are still wrinkles to be ironed out in the monitoring, the partnership is optimistic about the reach of the project.

"We frequently get inquiries from within and outside Wisconsin on this project," Fehlhaber said. "We know there is a level of interest in taking this research further."

Other projects to consider

In addition to the filtration bed, ELIA and Sheboygan County PCD are implementing other phosphorus-reducing methods in the watershed, including grassed buffers around farm fields, annual harvesting of weeds in the lake and installing a septic system filter on a newly renovated lakefront property.

"ELIA is now in the process of defining other watersheds coming into the lake so we can determine what future actions should be considered on an area-by-area basis," Schott said. "Although this project is a big step forward, there is no end to working on keeping our lake beautiful and safe."

Many residents along the lake "genuinely want to do something good for the environment and the habitats here," Stewart added. "And these kinds of projects wouldn't be possible without folks like that."

Elliot Meyer is the communications and media coordinator for the nonprofit Wisconsin Land and Water Conservation Association.