STATE OF WISCONSIN NATURAL RESOURCES BOARD MARKS MILESTONE ALONGSIDE THE DNR 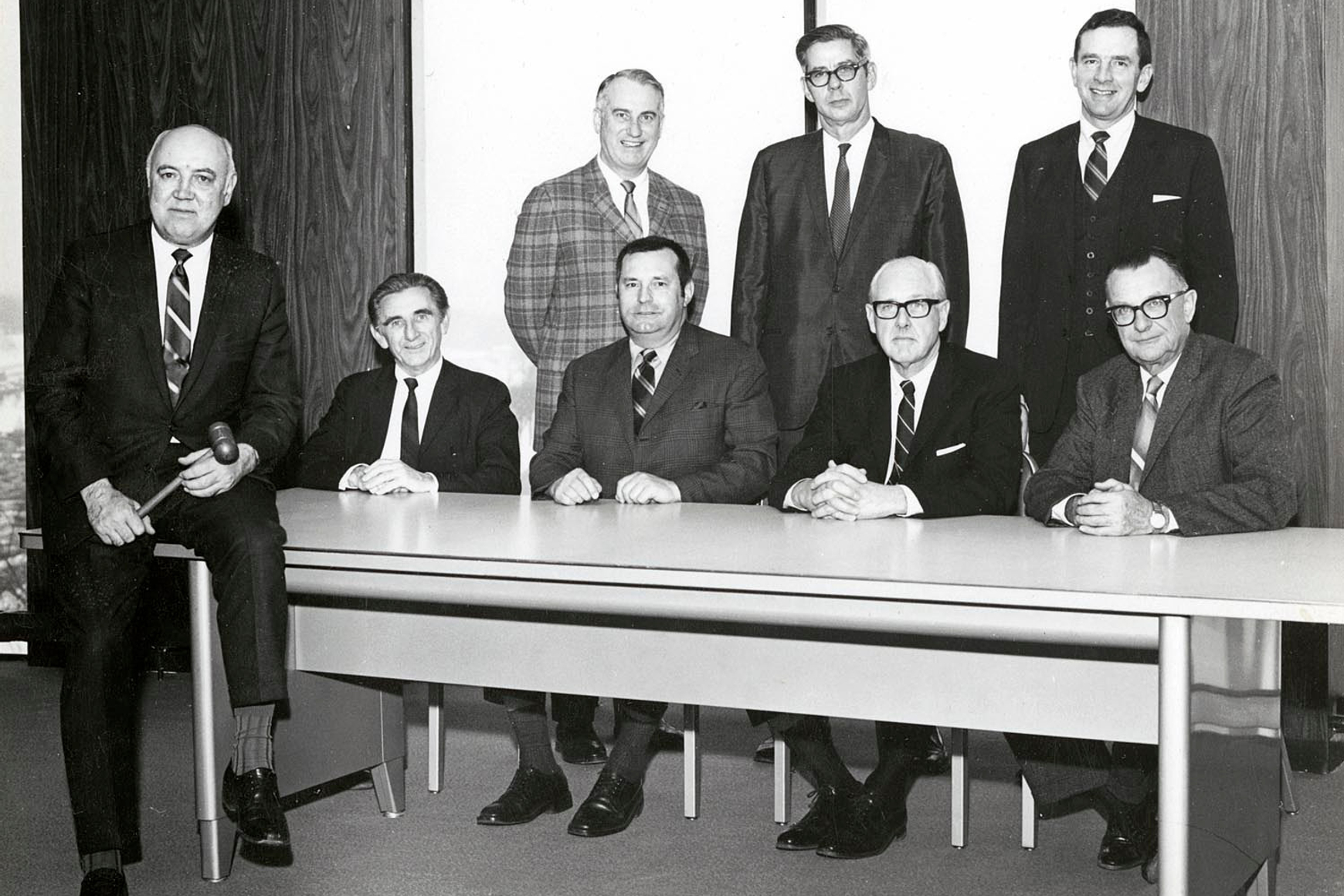 In 1967, the state Legislature approved the report of the Kellett Commission, established by Gov. Warren Knowles to study the reorganization of state government. A year later, the Kellett Reorganization Bill merged the departments of Conservation, which included wildlife, fisheries and forestry management, and Resource Development, whose Water Resources Division was responsible for environmental protection functions.

That action resulted in the creation not only of the current DNR but also its governing body, the State of Wisconsin Natural Resources Board (NRB). This was done by merging members of the two departments' previous oversight boards into a new seven-member citizen board.

The governor appoints NRB members who serve without compensation, except for their expenses. The state Senate must confirm the appointments. Board members serve six-year staggered terms.

The NRB is the policy-setting body for the DNR. All rule proposals, land acquisitions, property management master plans and budget proposals from department staff must be approved by the board before advancing for legislative or gubernatorial review and approval.

Important work to be done

The decade that followed the creation of the NRB was one of significant work. Christine Thomas, dean of the College of Natural Resources at the University of Wisconsin-Stevens Point, wrote a thorough history of the NRB published in the spring 1991 Environmental History Review.

"The increased awareness of environmental degradation resulted in a proliferation of state and federal environmental regulations," wrote Thomas, who herself served on the NRB from 2004 to 2015.

Throughout that early period, the board oversaw new rules to implement the federal Clean Air and Clean Water acts and approved a State Endangered Species Act. The board guided implementation of the Safe Drinking Water Act and was behind one of the most comprehensive groundwater protection acts in the nation.

In the 1980s, the board approved DNR air program studies that led to the first rules in the nation to control acid rain and surpassed the goal of cutting sulfur dioxide emissions by half. In the 1990s, the NRB approved rules for one of the nation's first and strongest comprehensive recycling programs and also oversaw implementation of the Knowles-Nelson Stewardship Program, which has protected more than 500,000 acres of Wisconsin's most beautiful and diverse lands and waters.

Through the early part of the 21st century, the NRB guided a series of rules to oversee management of hazardous materials in Wisconsin and to develop a new Remediation and Redevelopment Program. That has led to the cleanup of hundreds of contaminated properties across the state.

Throughout all of these initiatives, one of the most important aspects of implementing them has been citizen involvement at NRB meetings. The board takes citizen comments on almost all rules and decisions it considers.

The idea of public input is a key part of the board's history. "In 1933, the Conservation Commission authorized public hearings to gather input," Thomas wrote in her history of the board.

At meetings these days, it's not uncommon for the board to listen to comments from dozens of citizens. People can register to testify on any agenda item noticed for testimony at a given meeting or to testify under "citizen participation," bringing to the board's attention any concerns they have on state natural resources management.

Current Board Chairman Terry Hilgenberg says public engagement is a critical part of being an NRB member. "The more people we have engaged, the better the process will be." He adds this is especially true in situations where there are many divergent voices to be heard.

"The biggest challenges are when we are dealing with controversial issues," he says. On deer management, for instance, "everyone has an opinion on deer." Each year the NRB must approve deer population and harvest goals for the upcoming seasons.

"More public engagement strengthens our ability to balance what is in the best interest of not just an individual but the general public," Hilgenberg says. "I reach out to CDAC (County Deer Advisory Council) members to see what is going on (in their counties). We have to weigh the science presentation of DNR staff and the input of CDACs, the public and legislators and come to a balanced decision."

Despite the challenges, Hilgenberg says being an NRB member is extremely rewarding. He particularly enjoys being able to participate in tours of DNR projects when the board is on the road for meetings around the state.

"I have a much greater appreciation of the work department staff are doing after having the hands-on opportunity of seeing it in the field," he says. "It makes us appreciate the fees and grants the department receives to carry out its mission, because as board members we have to emphasize that these are state resources and we need to be using them efficiently."

Paul Holtan works for the DNR Office of Communications, editing the DNR's weekly news and outdoor report packets and serving as public affairs manager for the Bureau of Parks and Recreation.