Story and photos by Andrea Zani 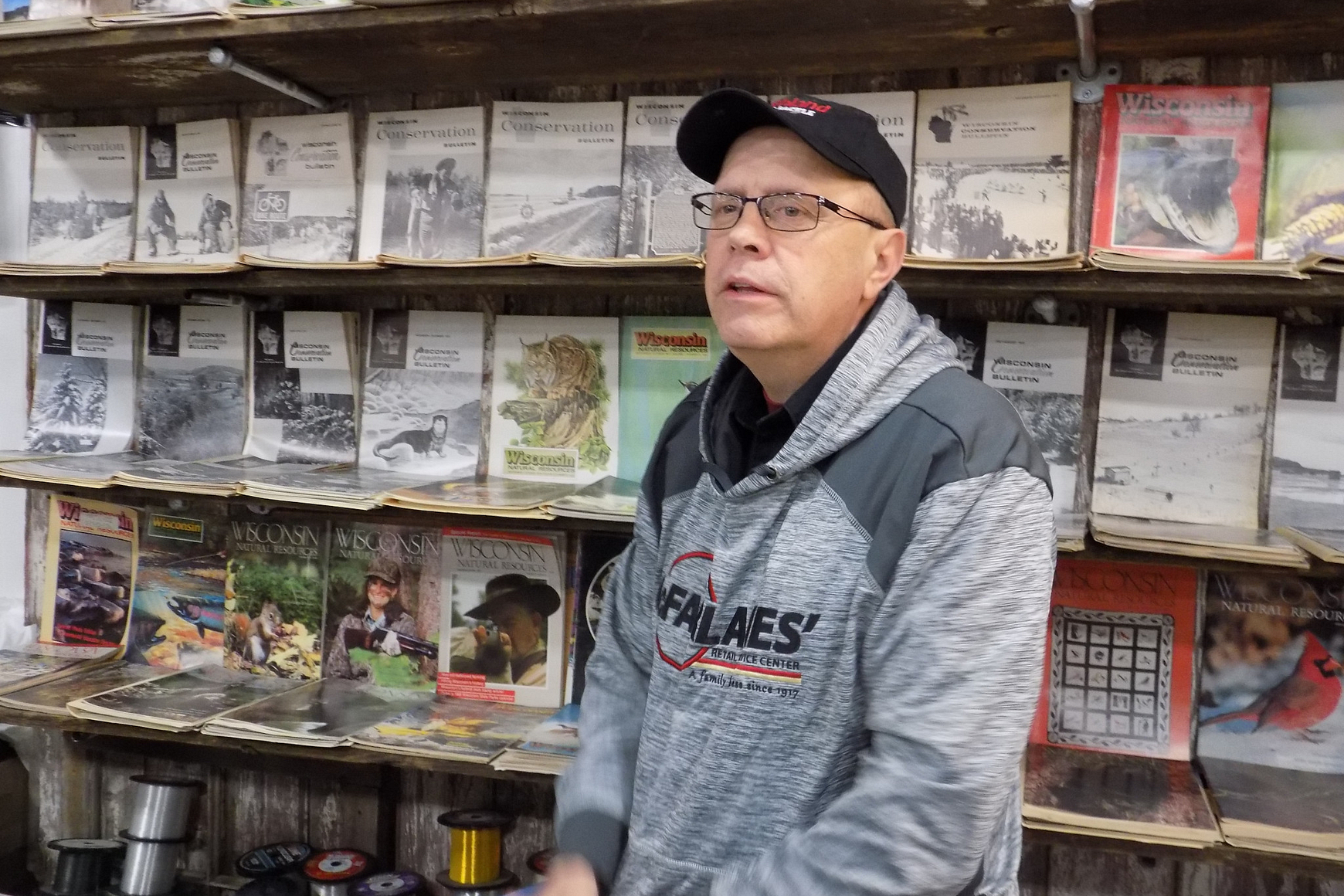 This particular rescue effort was an easy one for Wayne Whitemarsh. It took place a few years ago at an estate sale near Mazomanie, in southern Wisconsin, where he just happened to come across a truckload of treasure in need of saving: Hundreds of historic copies of Wisconsin Natural Resources magazine and the Wisconsin Conservation Bulletin.

"The guy said, 'Just give me two bucks for these boxes," Whitemarsh explained, recalling the dozen or so boxes filled to the brim with back issues dating to the 1960s. "And I couldn't wait to get my two bucks out of my pocket as fast as I could."

Whitemarsh piled the publications in the back of his pickup and carted them home to Sauk City. There, he added them to an ever-growing collection of items related to the Department of Natural Resources, Wisconsin's outdoors and the state's venerable traditions of hunting and fishing – of which he is so fond and proud.

Eventually, Whitemarsh took the magazines to work with him. That is, he added them to the special corner he oversees in his job as sporting goods manager at McFarlane's True Value, the hardware store wing of McFarlane's Retail Service Center in Sauk City.

Inside the store, Whitemarsh has put together an outdoors section that is as much museum and library as it is retail shop. There are dozens of animal mounts including several fish species, deer, turkeys, a pair of black bears and even one out-of-state bighorn sheep.

Many of the mounts have been unsolicited donations to Whitemarsh. "Maybe people are cleaning things out and they have these and don't know what to do with them, so they bring them in to me," he said. 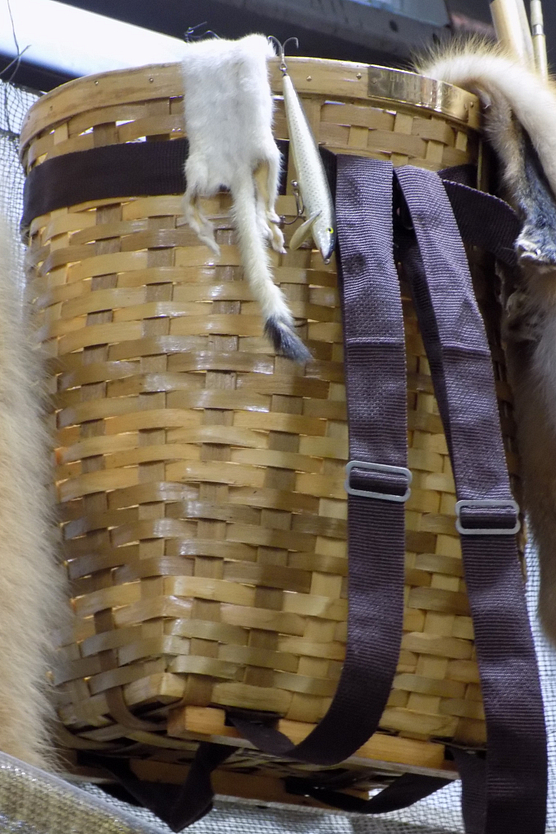 A basket from longtime trapper Leo Hoeft is special to Whitemarsh.

One of Whitemarsh's favorite items is an old-time trapper's basket, a beautiful woven piece given to him by the late Leo Hoeft, a longtime trapper who made much use of the basket over the years. Whitemarsh, 63, said he used to trap when he was in high school so the basket, complete with fur pelts, is special to him.

There's another basket too, this one on the floor and overflowing with shed antlers. "People just drop them off here," he said.

There also are the salvaged WNR magazines and Conservation Bulletins, part of the springtime display at McFarlane's. "I change it about every six months," Whitemarsh said.

The publications stack neatly on wooden shelves made of barn door boards by an Amish friend, and visitors are quite welcome to sit a spell and flip through the issues. Whitemarsh even provides a chair for that purpose.

"Especially some of the older folks who maybe don't get out to hunt and fish anymore, they'll come by to talk and have a cup of coffee. Maybe they'll sit here and read through an old magazine, commenting on this or that," he said. "I wanted to do this. I wanted people to enjoy them."

On an opposite wall from the magazines, there is more reading material. Whitemarsh has put together a selection of book titles dealing with Wisconsin's outdoors and also has been able to arrange author visits to the store by some of the writers of those works.

"The community is really supporting it," he said of the "bookstore" venture. It's a relatively new addition at McFarlane's, where Whitemarsh came to work about four years ago after many years at Sauk City's Wilderness Fish & Game.

It appears the community supports Whitemarsh, too, as evidenced by the steady flow of friends who seem to come through McFarlane's whenever he's on duty. They chat about fishing, hunting and the outdoors in general. The store sells licenses, too, so Whitemarsh is often found helping with that at his computer station where he connects to DNR's GoWild sales site.

On the hunt for food

In addition to everything he has out for public viewing at McFarlane's, Whitemarsh has much more tucked away at his home. In fact, he said, he has an entire 20-by-30-foot room filled with outdoors-related items, much of it historic.

"I call it 'Possum Lodge,'" he said, chuckling about the name he borrowed from the Canadian outdoors sitcom "The Red Green Show."

The home collection and the display at McFarlane's might be considered shrines of sorts to Whitemarsh's love of the outdoors. But he also shows his passion in another way – by organizing an annual "game feed" at his church in Sauk City.

The event, in early February each year, features foods donated by church members and has included everything from fish favorites like walleye and panfish, to venison dishes and elk hamburgers. They've also served a delicious rabbit stew, or hasenpfeffer, along with foraged foods such as hickory nuts, wild asparagus, mushrooms and more.

"Everybody has something they bring to the table," Whitemarsh said.

The camaraderie is as important as the cooking, he added. "Our idea is to get people together in the dead of winter just to see how they're doing."

The DNR's "Learn to Hunt for Food" program has been an inspiration for the meal, Whitemarsh noted.

"People say, 'I don't hunt.' Well, hunt for potatoes, hunt for carrots," he said. "Even if you're not a game person, there's something."

Keith Warnke, a DNR program supervisor instrumental in promoting "Learn to Hunt for Food," has worked with Whitemarsh in his endeavors for many years.

"He's a great guy," Warnke said. "Wayne has been dedicated to making sure hunting and angling remain relevant in Wisconsin. He's been at that ever since I met him in 1997."

Whitemarsh's influence is a real positive for growing efforts aimed at hunting for local and sustainable food, Warnke added.

"Wayne was a passionate promoter of hunting, fishing and foraging for food before it was cool. And now that interest has burgeoned, he is uniquely positioned to lead and educate apprentices."

It is exactly that idea of educating others that seems to please Whitemarsh most. He is devoted to the state's longstanding traditions of hunting, fishing and enjoying the outdoors and hopes they'll continue far into the future. 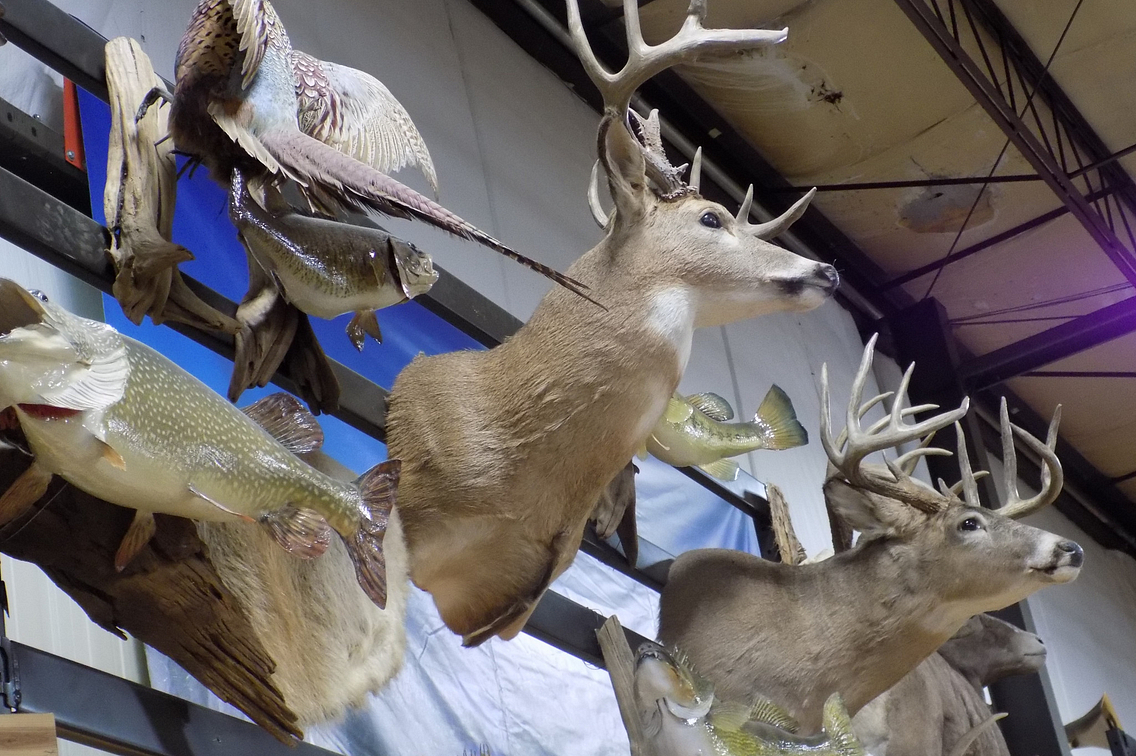 From fervent discussions about hunting and fishing, to selling licenses and helping customers pick out lures, it's all a part of Wayne Whitemarsh's corner of the world.

Fishing, too, is a big deal, he said, noting all the fervent discussions about the sport – this lure vs. that jig, bluegill or trout, where and when are best to fish – that occur in his corner of McFarlane's. "It's kind of like a little world within a world. It's very serious."

Even spring and fall bird migrations are a thrill for Whitemarsh. "Hey, that's important stuff," he said. "We want to know when the birds are coming back. That's all part of our history."

Ultimately, Whitemarsh hopes his own passion can help inspire others, especially youth, in the ways of Wisconsin's outdoors.

"We're trying to pass that on to young people," he said. "Get off that phone and get outdoors. There's so much you can learn."