"It is hereby declared to be the policy of the United States that certain selected rivers of the Nation which, with their immediate environments, possess outstandingly remarkable scenic, recreational, geologic, fish and wildlife, historic, cultural or other similar values, shall be preserved in free-flowing condition, and that they and their immediate environments shall be protected for the benefit and enjoyment of present and future generations."

Beginning with those words, the national Wild and Scenic Rivers Act was signed into existence on Oct. 2, 1968.

When President Lyndon B. Johnson touched pen to paper to make the legislation official 50 years ago, just eight rivers fell under the new law's scope.Two of those sites were in Wisconsin: a 24-mile section of the rugged Wolf River in the northeastern part of the state and 200 miles of the St. Croix National Scenic Riverway between Wisconsin and Minnesota, including the St. Croix's main tributary, the Namekagon.

Today, 208 rivers in 40 states and Puerto Rico fall under the Wild and Scenic Rivers Act. Though the 12,734 miles covered might seem high, it represents less than one-quarter of one percent of the rivers in the U.S. Wisconsin has 56,884 miles of river, with 276 miles now designated as wild and scenic. The original segment of the St. Croix that fell under the act — from near Gordon, where the river begins, to St. Croix Falls near Interstate State Park — was twice expanded. In 1972, 27 miles of the Lower St. Croix River became the first segment added by Congress to the National Wild and Scenic Rivers System. And in 1976, the addition of another 25 miles downstream was finalized, stretching to the St. Croix's confluence with the Mississippi River.

Incredible scenery, a variety of recreational activities and proximity to cities and towns combine to make the St. Croix River a mecca for outdoors lovers of all sorts. From fishing to birdwatching to camping, canoeing, hiking, rock climbing, boating, swimming and more, there is something for everyone. Inclusion in the federal Wild and Scenic Rivers System ensures that the St. Croix will flow freely while also embracing appropriate river management for development and use.

That's what lawmakers such as then-U.S. senators Gaylord Nelson of Wisconsin and Walter Mondale of Minnesota envisioned when they championed the Wild and Scenic Rivers Act decades ago. Their vision was to counteract years of damming, water diversion and unchecked growth and use that had combined for a detrimental effect on many of the nation's most scenic rivers and the associated landscape, wildlife and drinking water.

The Wild and Scenic Rivers Act seeks to balance development, dam construction, recreation and agricultural activities along rivers with the need to protect free-flowing conditions, water quality and river resources. Development is not prohibited nor does the federal government control any private property on designated rivers — categorized as "wild," "scenic" or "recreational" — but care is taken to protect river heritage.

In Wisconsin, that means maintaining the St. Croix and Namekagon along with the Wolf rivers in their picturesque and often-rugged natural states. For 50 years, the Wild and Scenic Rivers Act has helped to do just that. 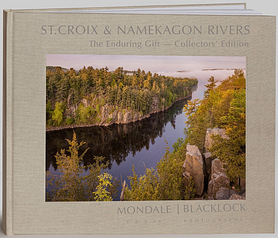 Blacklock, a Minnesota native, is passionate about the need for maintaining healthy land and water resources. He has been the photographer for 18 books celebrating the outdoors and significant natural resources such as the Apostle Islands and Lake Superior.

This latest work is Blacklock's first project since he was badly burned by fire in 2014. Because that incident left his hands sensitive to cold, he decided to move away from photographing the colder environs of Lake Superior and instead check out the warmer waters of the St. Croix River. He paddled every mile of the St. Croix and Namekagon rivers by canoe or kayak in the course of completing the book.

"St. Croix & Namekagon Rivers: The Enduring Gift" is available in three editions. The Collector's Edition is $90; a Museum Edition is $1,500, with three original prints of Blacklock's work included. The Signature Edition ($4,000, limited to 120 copies) includes six original prints and is signed by former vice-president Walter Mondale, who co-sponsored the Wild and Scenic Rivers Act with Wisconsin's Gaylord Nelson when both were in the U.S. Senate.

The book is available through Blacklock's website, stcroixphotography.com. It also can be found at his galleries: Blacklock Gallery in Moose Lake, Minnesota, blacklockgallery.com, and Waters of Superior gallery at Canal Park in Duluth, Minnesota.

Anyone who purchases a copy of "St. Croix & Namekagon Rivers: The Enduring Gift" will receive access to a one-hour video with a slide show of Blacklock's images. A sample clip of the video is available on the stcroixphotography.com website.