BEES, BUTTERFLIES AND OTHER SPECIES CAN USE A BOOST TO TAKE CARE OF BUSINESS 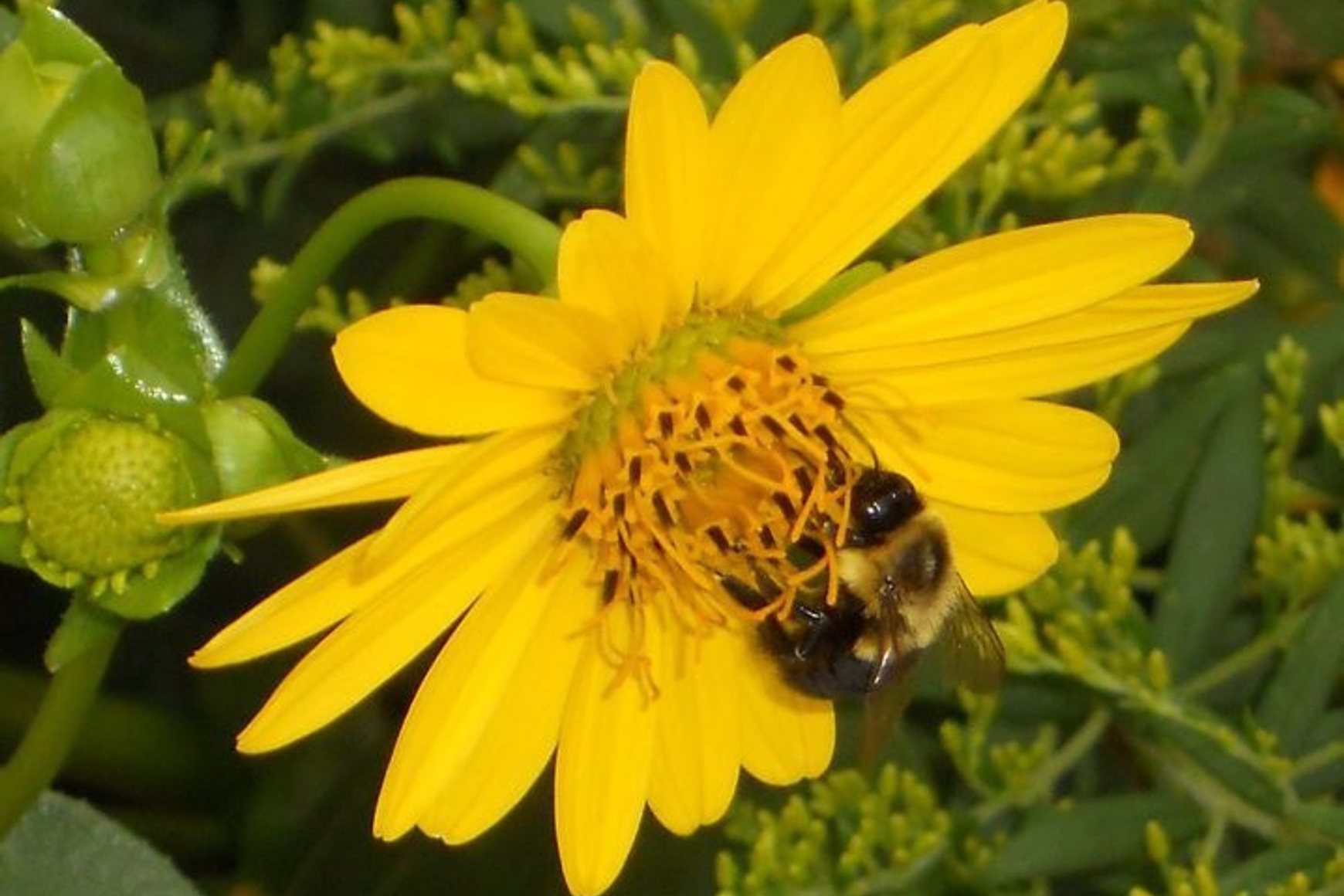 Native bees and other pollinators are vital contributors to all that grows in Wisconsin.
© DNR FILES

Anyone watching a bee buzz from one bloom to the next may not give a second thought to the important work being done. But the pollinating process that takes place through the activity of bees and other species is vital to a whole host of things that grow, from wildflowers to agricultural crops, as well as to natural areas and broader ecosystems.

These species, small in size, pack a big punch when it comes to keeping things humming in the natural world.

To better understand pollinators, first consider there are a variety of types. Bees that are native to Wisconsin are critical pollinators, especially for native plant species and also for crops. Honey bees are not native to North America but are nonetheless important, particularly to the agricultural industry. Butterflies and moths are pollinators, too, with some migratory species such as monarchs traveling thousands of miles to get the job done.

It's also important to know that many species of pollinators are facing threats. Those monarchs, for example, have seen their numbers decline precipitously in the past two decades, and native pollinators such as the regal fritillary and northern blue butterfly are on the state's endangered species list.

More recently, the rusty patched bumble bee was listed as endangered by the U.S. Fish and Wildlife Service because of steep population declines. And other species are being evaluated for federal listing as well because of concerns with dwindling numbers.

Problems involving habitat are atop the list of challenges for pollinators. Changes such as fragmentation and degradation and outright habitat loss have presented difficulties. Monitoring projects and efforts focused on maintaining enough suitable habitat are main ways the DNR and its partners are working to protect these essential species.

Because of their importance to state agriculture, honey bees fall under the realm of Wisconsin's Department of Agriculture, Trade and Consumer Protection (DATCP), while the Department of Natural Resources works mainly with native pollinator species. The DNR did participate as a stakeholder in DATCP's Wisconsin Pollinator Protection Plan, said Jay Watson, a DNR conservation biologist. 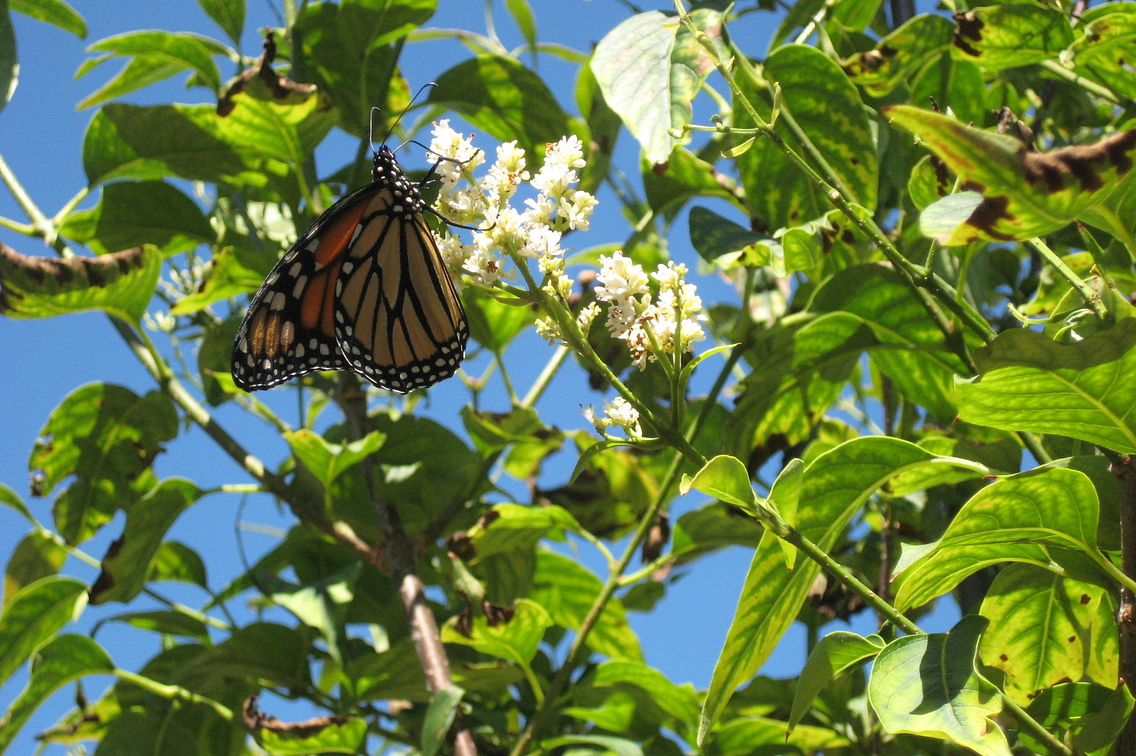 Monarch butterflies are a focus of conservation efforts including the new Wisconsin Monarch Collaborative.
© DATCP FLICKR

The DNR does a great deal of work overall to address pollinator habitat and education, especially when it comes to the state's many native pollinator species, he added.

"We are focused on improving and creating habitat for pollinators, along with outreach, education and monitoring pollinators," Watson said.

There are differences between honey bees and native bee species, including diseases that may affect each one and the types of plants each are best at pollinating. But habitat issues can be similar for both honey bees and native bees as well as for other pollinators, including butterflies, moths, pollinating beetle, fly and wasp species, and hummingbirds.

The DNR, particularly through its Natural Heritage Conservation program, works to understand and address many of these issues. June 18-24 was celebrated as Pollinator Week in Wisconsin and the DNR supports a number of programs, including citizenbased monitoring efforts, to help pollinators of all sorts.

"We just launched the Bumble Bee Brigade to help us understand the current distribution of the 20 bumble bee species that have been found across the state," Watson said.

And the agency also is focused on that other important pollinator, the monarch butterfly, he added. The recently formed Wisconsin Monarch Collaborative — with more than 70 stakeholders from government agencies, agriculture, public and private land management, education, research areas and others — will be instrumental in drafting the state strategy for monarch conservation.

"We are working on a strategy in Wisconsin to help improve the monarch butterfly population as part of the Mid- America Monarch Conservation Strategy," Watson said. "Many habitat and other efforts by Wisconsin government, nonprofits and utilities on behalf of monarchs will be highlighted."

'All hands on deck'

Another boost for pollinators comes from what at first glance might appear to be an unlikely partner: Pheasants Forever. But this nonprofit group dedicated to the conservation of game birds also has reason to be concerned about pollinators.

Scott Stipetich, a senior farm bill biologist for Pheasants Forever, explained that for the first months of life, pheasant and quail chicks eat mostly small, soft-bodied insects. Without a habitat type that attracts those insects, chick survival rates drop — and that has a significant effect on fall populations. The same connection includes grassland songbirds, butterflies and native bees, among other species.

"Here in Wisconsin, we have seven biologists covering the partnership between Pheasants Forever, DNR and NRCS," Stipetich said. "Our job is to work with private landowners, largely writing plans and finding funds."

Pheasants Forever even caters seed mixes to landowners, he added, with the goal to create more suitable habitat areas.

Such efforts to help pollinators indicate just how critical a natural resource they are.

"It's all hands on deck for pollinators," said DNR Species Management Section Chief Owen Boyle. "Our native pollinators are incredibly important to maintaining Wisconsin's native ecosystems and agriculture, and we can all take steps to help them." 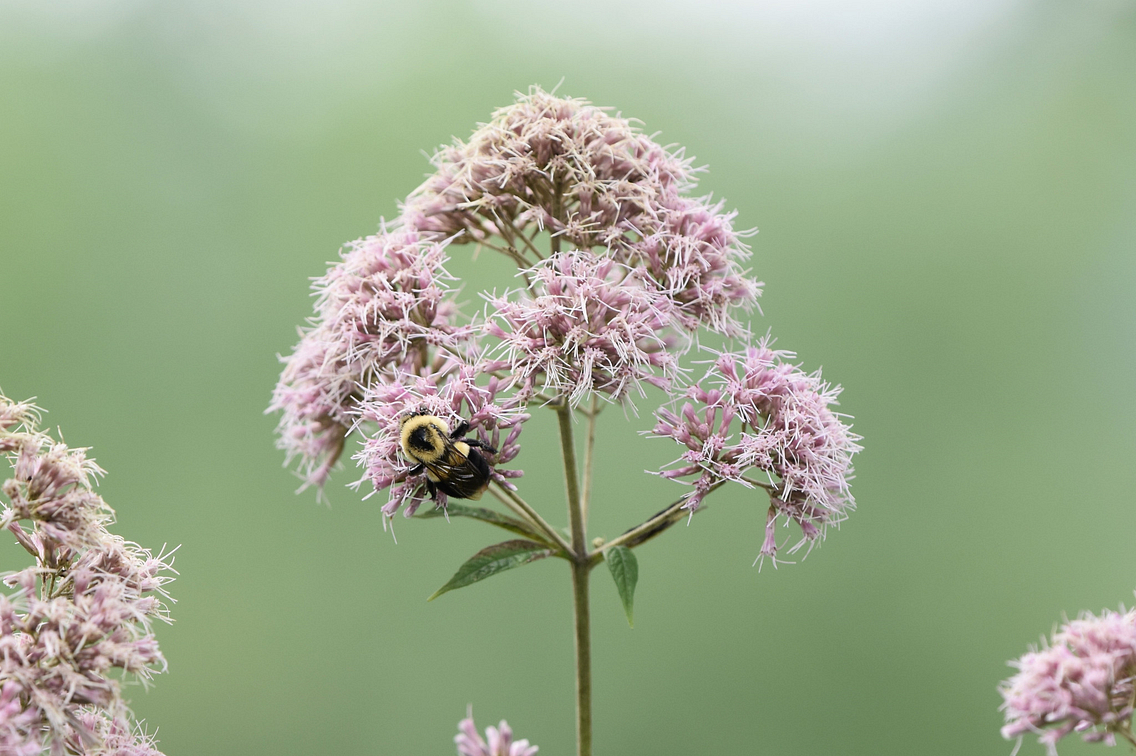 Joe-pye weed is one of the native plants that help attract pollinators.
© JAY WATSON

For more on bees, butterflies and other pollinators, including how to help create better habitat and get involved in volunteer monitoring opportunities, go to Saving Wisconsin's native pollinators. 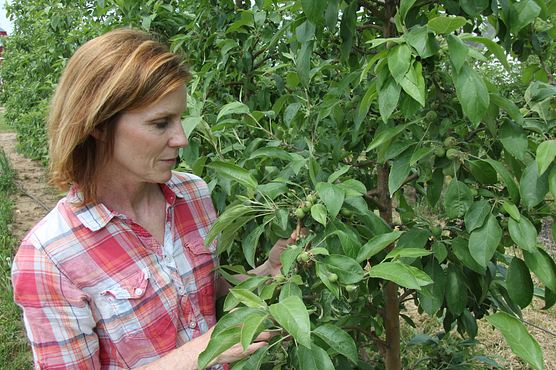 Laura Tisch checks out the handiwork of bees and other pollinators in her 8,400-tree family-operated orchard in Blanchardville.
© LEE FAHRNEY

Laura Tisch has much to be concerned about when it comes to the pollination of apple trees. With 8,400 trees in her family-operated orchard near Blanchardville, in southwest Wisconsin, she maintains a total of 11 honey bee hives, each of which can contain tens of thousands of bees.

"The honey bees and other pollinators are crucial to a healthy orchard," Tisch said. "I need them for pollination and try hard to provide them with an attractive, healthy habitat."

She also is well aware of the threat from Colony Collapse Disorder, a problem first identified in 2005 that has caught the attention of the Wisconsin Department of Agriculture, Trade and Consumer Protection (DATCP) and other government, agriculture and conservation groups. CCD affects honey bees, which are not native to North America but are key in pollination, especially for agriculture.

According to the Environmental Protection Agency, Colony Collapse Disorder occurs when the majority of a honey bee colony's worker bees disappear, though plenty of food exists, leaving behind a queen and a few nurse bees. CCD threatens the sustainability of honey bee populations, which have an estimated annual impact of $19 billion on agriculture in the United States.

The Varroa mite often is mentioned as the source of the abrupt depopulation of honey bee colonies during the winter across North America, but it's not the only factor in Colony Collapse Disorder, said Dan Ziehli, an apiary inspector for DATCP.

"Things such as disease, vectors like the Varroa mite, hive beetles, wax moths and rodents" are an issue, he said. "The disappearance of honey bee habitat affects the colony, along with adverse weather patterns."

DATCP's Apiary Program monitors commercial and backyard beekeepers to help protect the places where bees are kept – apiaries. Ziehli is the apiary inspector for southern Wisconsin, one of two in the state. 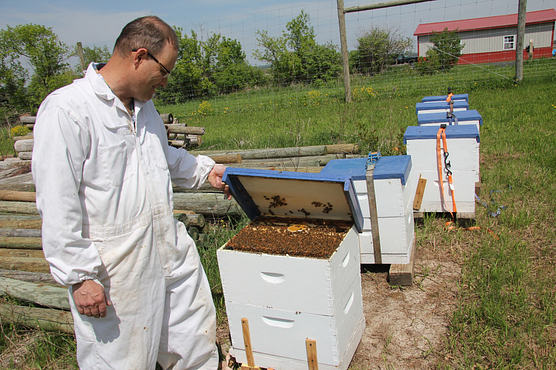 Dan Ziehli, a bee inspector for the Wisconsin Department of Agriculture, Trade and Consumer Protection, keeps an eye out for Varroa mites and diseases that could lead to Colony Collapse Disorder.
© LEE FAHRNEY

"Our goal is to provide a free inspection service looking for all bee diseases and vectors," he said. "We educate beekeepers on new methods and health of honey bees, and we enforce compliance of our state statutes, from one colony to thousands of colonies."

The most common reason for winter kill of honey bees, a major pollinator in the state's apple orchards and cranberry bogs, is the failure of beekeepers to use best practices, Ziehli noted.

"Mite control and its proper use and timing (are) the most common," he said. "Honey bees seem to winter pretty good in Wisconsin if healthy — keeping them healthy is the issue. A colony does not have to completely die to have colony collapse. It can slowly dwindle down to such a small size it is impossible to survive."

Knowing the basics of honey bees is vital. For beekeepers, this means being in tune with bee biology and the particular requirements of their apiaries.

Tisch, for one, embraces this aspect of beekeeping at her orchard and takes great pains to ward off the potential impact of Colony Collapse Disorder. A chemist by profession, she uses weather stations to collect temperatures, precipitation, relative humidity, leaf wetness hours and soil moisture in her bee habitats.

"With this information, I can run disease and insect models," Tisch said. "This is how I make all my management decisions on what I need to do to keep my orchard healthy. Without my insect traps and weather stations, I would be guessing on how to care for things."

Researchers from UW-Madison also grasp the importance of knowing what's happening with honey bees. Hannah Gaines Day, a Ph.D. and assistant scientist in the UW Department of Entomology, is among those researching CCD and other issues related to honey bees.

"We are trying to understand how the surrounding landscape — woods, grassland and agriculture — influences the success of the hives in the summer (i.e. honey production) and overwinter (survival)," Gaines Day said.

A final note of interest in the world of honey bees is a relatively new wrinkle — an increase in migratory beekeeping.

For example, Wisconsin imports thousands of honey bee colonies from other states for use in the cranberry industry, Ziehli said. "Two or three semis loaded with bees will be coming into the state to pollinate the cranberries." Care must be taken with these imports to limit disease transmission that can impact our native species.

In addition, the state sends many honey bees out of state, Ziehli added. "The majority went to California for almond pollination."