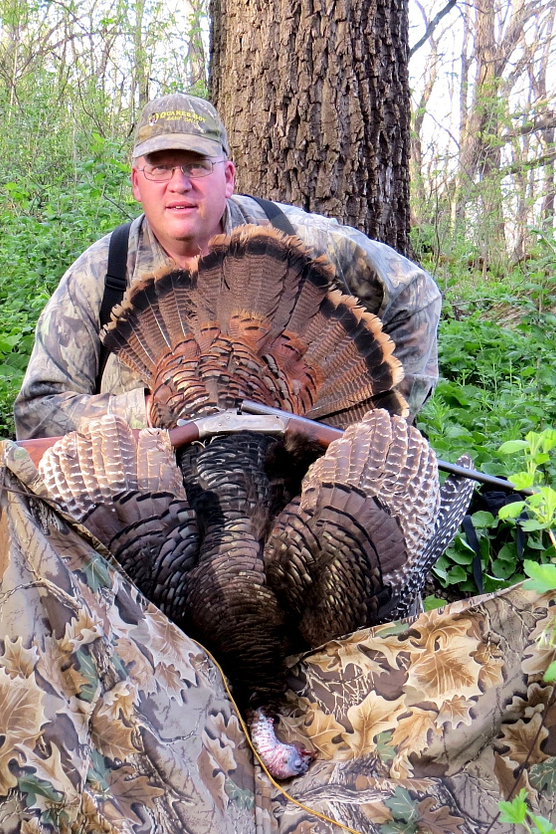 Author Kevin Feind bagged a turkey in spring 2017 with the Iver Johnson .410 gauge shotgun passed down from his father.© COURTESY OF KEVIN FEIND

There are many who have family heirlooms that have been handed down from generation to generation. Some have their great-grandparents' silverware, or maybe an old bed or trunk was brought over from the "old country." In my case, I'm the caretaker of my father's Iver Johnson "Champion" single-shot .410 gauge shotgun.

My dad got the little gun on his 8th birthday in 1928, the year before the Great Depression. As the story goes, my grandfather didn't tell Grandma he was going to spend the $20 on the gift, and she was a bit upset at such an extravagance. One can only imagine how much $20 could have purchased to support the household in those days.

Fast-forward to the 1970s. My three brothers and I all carried the .410 as our first gun while small game hunting for rabbits and squirrels. My first hunting memory of the .410 was when I was 11 years old. I was walking with my dad as we hunted for rabbits on a friend's property in the Marshfield area in central Wisconsin. Our beagle, Lady, was hot on the trail of a cottontail. There was about a foot of snow on the ground, and I was standing a few feet to my dad's right.

Those who rabbit hunt with a hound know that rabbits make a circle when being chased. Well, Lady was getting closer, and her barking intensified with every second. Dad and I were on high alert, waiting for the first sight of that rabbit.

Moments later, the rabbit came bounding through the brush from our right. I was unarmed, for I was only 11. I could see the rabbit, but Dad couldn't, and I tried in earnest to point to where it was. Lady's turbo-thrusters kicked in as the scent got hotter, and she was coming fast! It would be only a few moments before the rabbit would decide to gain more distance between itself and the incoming beagle.

Much to my surprise, after my several failed attempts at pointing out the rabbit, Dad did something that still amazes me today. He cocked the hammer of the .410 and handed it to me. "It's cocked and ready to go, see if you can shoot the rabbit," he said.

In awe, I carefully took the gun and aimed. I fired and a cloud of snow erupted, blocking my view of whether I had hit the target or not. Lady, at the sound of the shot, hit a high tenor voice and now was coming through the snow like a freight train. I handed the gun back to Dad and ran to where I'd shot at the rabbit.

I found the rabbit at the same time Lady did. Much to my dad's amazement, and mine, the rabbit was lying there. I proudly lifted the rabbit up, grabbing it by the hind feet. My dad's laugh is still clear in my memory.

Returning home, he explained to my mom how surprised he was that I had hit the rabbit. He was never a very excitable man, so hearing him tell the story with such delight still makes me smile.

From past to present

The memories I made carrying the .410 mean a lot to me, even more so since my dad died in 1985. His unexpected death was such a shock, it changed me and my family forever.

Being a passionate turkey hunter since 1989, I thought it would be a fun challenge in the 2017 spring season to harvest a turkey with the little .410. I bought and patterned some new No. 6 shotgun shells, and found it provided adequate hits out to 20 yards.

In early May, I was hunting at the Yellowstone Lake Wildlife Area in Lafayette County. It was a beautiful early evening when my hunting partner and I got two birds to gobble. We estimated them to be about 250 yards to our west.

We separated — I took the high elevation and he took the low. About an hour later, two jakes slowly made their way toward me, feeding on past-bloom gooseberry flowers as they approached. Using my range finder, I noted what trees they had to walk past to be in range for the little gun.

I watched them for nearly a half hour, and finally the second in line passed a 20-yard white oak trunk, and stood at 19 yards. Finding the .410's hammer with my thumb, I had to make sure the movement was slow so as to not spook the bird. As I pulled the hammer back and heard the "click," I remembered my dad's words from so many years ago: "It's cocked and ready to go."

Carefully, I aimed the barrel's small brass bead just above the greater caruncles of the jake's neck and fired. I had fulfilled my dream, a turkey with the .410 — the first for this 90-year-old family heirloom.

For those three days that I carried the .410, I couldn't help but think of my dad. I found myself praying for him and talking to him as I carried his gun. I thought about all the hunts this little gun had been on, how my dad had carried it for more than 40 years before his first-born laid hands on it, and how each of his four boys had carried it on their first rabbit hunt.

Upon harvesting the bird, I fought back tears, thinking how proud my dad would be. I carried the jake back to my knee-high blind and posed for photos. I envisioned the smile on my dad's face and remembered his laugh, just like the one I'd heard when I shot that cottontail 41 years ago.

My dad planted the seed of hunting heritage importance with my brothers and me. My wife and I weren't able to have children of our own, so instead I've coordinated the Douglas County Learn to Hunt Turkey program since 2006. With the Gitchee Gumme Chapter of the National Wild Turkey Federation, we have introduced more than 150 first-time hunters to this sport I treasure. The dedicated volunteers in the program have encouraged so many new hunters. I hope this tradition continues to grow in years to come.

I so enjoy being the adult who coaches a new hunter to carefully take aim at a gobbler's greater caruncles. To quietly click off the safety, taking great care not to get spotted due to movement. And to whisper those treasured words, "It's cocked and ready to go."