The Central Sands Region lies east of the Wisconsin River and encompasses 1.75 million acres in parts of Adams, Marathon, Marquette, Portage, Shawano, Waupaca, Waushara and Wood counties. The region is underlain by deposits of sand and gravel, with localized deposits of fine-grained sediment that were left by glaciers at the end of the last ice age. The 800 miles of trout stream and 300 lakes are generally well connected to the sand and gravel aquifer and provide recreation and tourism value including hunting, fishing, canoeing and kayaking. The productive sand and gravel aquifer also supports groundwater withdrawals from water uses such as: irrigated agriculture, public and private water supplies and commercial and industrial users.

Studies of the connection between groundwater and surface water resources have been ongoing in the Central Sands since the advent of widespread groundwater pumping in the 1960s (see additional resources below). To support this study’s unique set of questions on impacts to the three study lakes, we considered land use and water use changes over the past 150 years. The timeline illustrates the progression of land cover and use change across the Central Sands Region which began nearly a century before the start of more widespread groundwater pumping starting in the 1960s.

The DNR has provided the following updates to key legislators and various stakeholders throughout the project:

Map of the Central Sands

The Central Wisconsin Sand and Gravel Aquifer is defined as a contiguous area east of the Wisconsin River with sand and gravel surficial deposits greater than 50 feet deep. 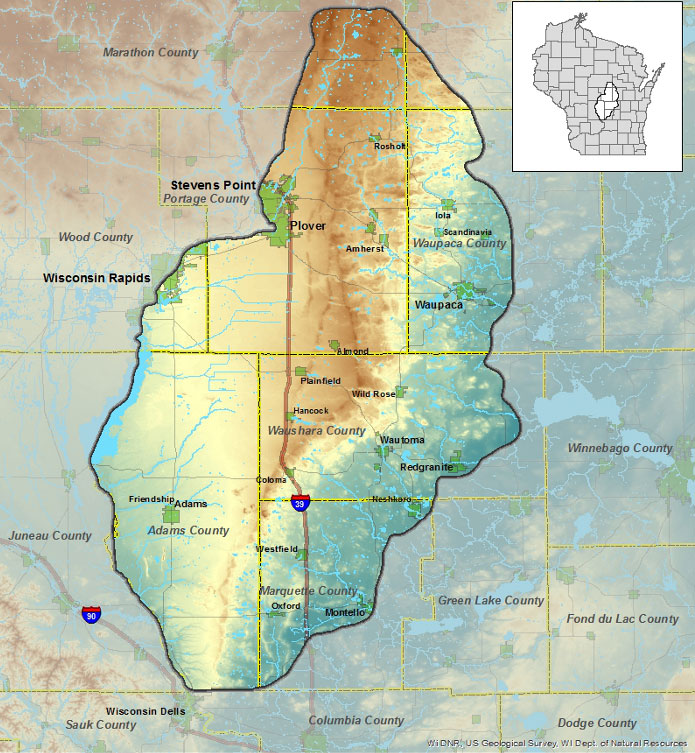